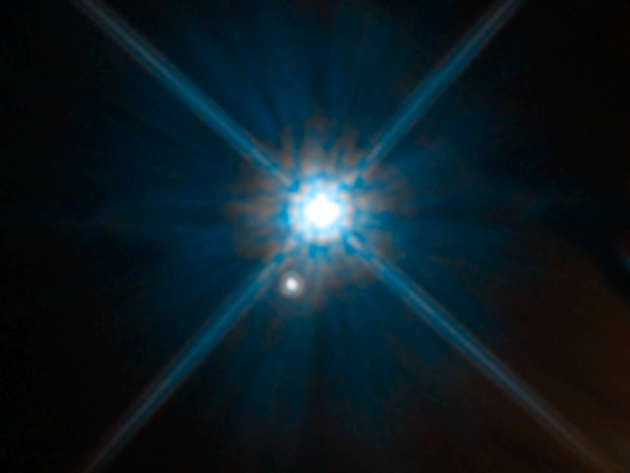 Stein 2051 B is a white-dwarf star in the constellation Camelopardalis.

The Hubble Space Telescope has spotted light bending because of the gravity of a nearby white dwarf star — the first time astronomers have seen this type of distortion around a star other than the Sun. The finding once again confirms Einstein’s general theory of relativity.

A team led by Kailash Sahu, an astronomer at the Space Telescope Science Institute in Baltimore, Maryland, watched the position of a distant star jiggle slightly, as its light bent around a white dwarf in the line of sight of observers on Earth. The amount of distortion allowed the researchers to directly calculate the white dwarf’s mass — 67% that of the Sun.

“It’s a very difficult observation with a really nice result,” says Pier-Emmanuel Tremblay, an astrophysicist at the University of Warwick in Coventry, UK, who was not involved in the discovery. The findings were published in Science1 and presented at a meeting of the American Astronomical Society in Austin, Texas, on 7 June.

White dwarfs are the remains of stars that have finished burning their nuclear fuel. The Sun will eventually become one.

Sahu’s team studied a white dwarf known as Stein 2051 B, in the constellation Camelopardalis. At 5 parsecs (17 light years) from Earth, it is the sixth-nearest white dwarf.

Because it is so close, it appears to move quickly across the sky compared with more-distant stars. Sahu and his colleagues realized that during 2014 it would pass directly in front of a background star that lies around 1,500 parsecs, or 5,000 light-years, away. They signed up for time on Hubble to watch the event.

In eight observations between October 2013 and October 2015, the background star seemed to shift back and forth slightly. The shift was so small it was equivalent to a person in London watching an ant crawl across a coin in Moscow, but it was enough to confirm that the gravity of Stein 2051 B was bending the light of the background star.

In 1919, British astronomer Arthur Eddington and his team watched light bending around the Sun during a total solar eclipse, confirming Einstein’s theory. Researchers have since seen light from distant galaxies bending around the gravity of intervening galaxies, but the new work is the first time anyone has observed a single object — the white dwarf — seemingly cause a background star to shift.

The phenomenon is known as astrometric microlensing, and there may be many more examples to come, says Martin Dominik, an astronomer at the University of St Andrews, UK. The European Space Agency’s Gaia space telescope is mapping the precise positions of a billion stars and may spot as many as 1,000 instances of such microlensing, Dominik says.

Sahu’s team has already started another project to look for this phenomenon using Proxima Centauri, which at 1.3 parsecs (4 light-years) away is the nearest star to Earth. It is passing a background star now, and the team has obtained a couple of observations with Hubble, Sahu says.