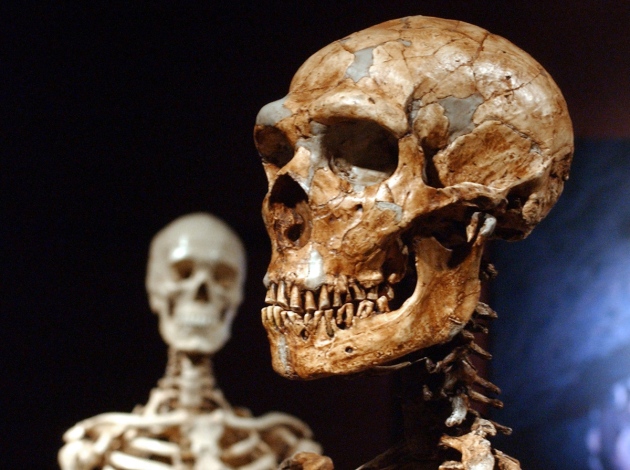 A reconstructed Neanderthal skeleton (right) and a modern human version of a skeleton (left) on display at the Museum of Natural History in New York.

The DNA sequences of Neanderthals and other extinct human relatives have exposed lost migrations, sexual escapades and even new species. Now, researchers have uncovered another molecular clue lurking in the bones of long-dead humans: the so-called 'epigenetic' chemical modifications that adorn DNA and orchestrate gene activity.

Epigenomes of two archaic humans — a Neanderthal and a Denisovan, groups that lived in Europe and Asia until around 30,000 years ago — are revealed today in Science1. The report follows on the publication in December of a similar map from another group analysing epigenetic modifications in a 4,000-year-old native of Greenland2.

Epigenetic differences between humans and their ancient relatives may explain differences in physical traits, or phenotypes, such as the jutting brow ridge of Neanderthals. Yet various obstacles still hinder the study of ancient epigenomes, and some researchers are not yet sure if the approach will yield insights.

The genomes of humans and Neanderthals differ little; the two groups have fewer than 100 proteins that differ in their amino acid sequence. DNA sequences alone give little indication of whether the gene was active or not. In contrast, epigenetic chemical signatures can sometimes differ between genes that are active and those that are not. Computational biologists Liran Carmel and stem cell biologist Eran Meshorer, at the Hebrew University of Jerusalem, and their team hoped that if they could detect epigenetic differences between humans and their archaic Neanderthal and Denisovan cousins this might eventually help to tell when and where certain genes were active.

“We wanted to know if we could say anything about how genes were active or regulated in our closest evolutionary relatives,” Carmel says. “This may be very relevant to explaining some of the known phenotypic differences between us.”

Epigenetic modifications are a suite of alterations to DNA and to the proteins that keep the genome wrapped up into chromosomes. One commonly studied alteration is DNA methylation (the addition of methyl chemical groups to particular nucleotides in DNA), which typically silences gene activity. Gene silencing is important in development, when genes are permanently turned off as cells and tissues such as bone-making cells become specialized.

The techniques that scientists normally use to map methylation patterns in DNA are too destructive to apply to the precious remains that yielded the genomes of Neanderthals and Denisovans (an archaic human group first identified from a single finger bone found in a southern Siberian cave: see 'Fossil genome reveals ancestral link'). So Carmel and his colleagues came up with a computational workaround to infer methylation patterns from ancient genomes.

As ancient DNA degrades, certain nucleotides go through a chemical reaction called deamination, which alters how a DNA sequencer decodes them. Ancient-DNA researchers have developed ways to exclude these misreads. But Carmel’s team realized that because the methylated DNA nucleotides would give a different deamination product from the unmethylated nucleotides, they could use this feature to deduce which sequences in the Neanderthal and Denisovan DNA had been methylated.

A team led by evolutionary geneticist Ludovic Orlando, at the University of Copenhagen, came up with a similar approach to determine the methylation map of a 4,000-year-old Greenlander, whose genome had been sequenced from a hair sample.

The Neanderthal and Denisovan ancient epigenome maps that Carmel's team obtained were similar to the methylation maps from present-day human bone cells — good evidence, Carmel says, that the method is accurate.

His team next searched for the locations in the archaic genomes where methylation patterns differed from those in modern human bone DNA. The team found several such differentially methylated regions in a cluster of genes called the HOXD genes, which are important in limb development, and in a gene called MEIS1 that encodes a protein that controls the activity of the HOXD genes.

“All this makes a very nice hypothesis that changes in activity in these genes may really explain differences in limb morphology between us and Neanderthals,” Carmel says, such as their beefier hands, longer femur bones, and broader knee and elbow joints.

But proving this hypothesis will be difficult. "We still have trouble fully interpreting epigenomes among modern individuals," says Joshua Akey, a population geneticist at the University of Washington in Seattle. "So it is a bit more challenging to try and figure out what the epigenetic differences we observe between ancient humans and modern humans mean, in terms of biology.”

Epigenetic alterations could potentially be mimicked by altering the expression of genes in lab animals or human cells, Carmel suggests. (Denisovan DNA has been recovered from only fragments of bones and teeth, so it is more difficult to link their epigenomes to body form.)

Another fundamental challenge to ancient epigenomics is the origin of the data. Epigenetic alterations can vary drastically between tissues, so epigenomes gathered from structures that persist — bone, hair or teeth — will not necessarily say anything about the brain, says Deborah Bolnick, an anthropological geneticist at the University of Texas in Austin, whose team is analysing epigenetic alterations in younger samples from Native Americans.

But she notes that some methylation patterns do seem to be similar across different tissues, offering the potential to glean some detail about organs that don’t last thousands of years in a cave.

In fact, Carmel’s team found that methylation differences between humans and their archaic kin were twice as likely to occur in genes implicated in disease than in genes that are not associated with illness. A full one-third of these differences were in genes associated with neurological and neuropsychiatric disorders.

There are technical issues with ancient epigenomics. The methods developed by Carmel’s and Orlando’s teams rely on ancient genomes that have been extensively degraded by deamination, but which are of high coverage (meaning that most of the nucleotides in the genome have been read many, many times by a sequencing machine). “We don’t have a good sense how widely it can be informative” when applied to other ancient genomes, Bolnick says of the new methods.

Answers may come soon. Orlando says he is interested in applying epigenomics to horse evolution, where it could help explain changes in the anatomy of horses that occurred alongside climatic shifts and domestication by humans. Carmel plans to compare the epigenomes from remains of European hunter-gatherers and early farmers, whose dietary and lifestyle shifts could be reflected through epigenetic changes.

“I think this is a foundational paper,” Bolnick says of the Science report, “that will in some sense lay the groundwork for a big area of research that’s getting under way.”