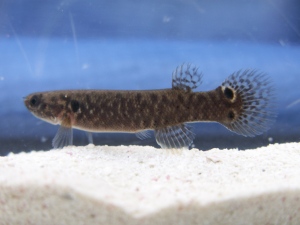 The mangrove rivulus can reproduce both sexually and asexually, and mixes up the two to its benefit.

Despite the potential drawbacks of shunning sexual reproduction, many species, including the mangrove kilifish, rely at least in part on self-fertilization or less extreme forms of inbreeding. This allows organisms to pass more of their genes on to their offspring, but it also decreases genetic diversity, which can, among other things, render them more susceptible to pathogens.

By having just the right amount of sex, the mangrove rivulus (Kryptolebias marmoratus) avoids this pitfall by boosting variability in the immune-system genes that confer pathogen resistance, according to a study published last week in Proceedings of the Royal Society B1.

"A lot of people talk about how genetic diversity is important for the existence of a species, but this paper shows that parts of the genome can be more important than the rest," says Christophe Eizaguirre, an evolutionary ecologist at the GEOMAR Helmholtz Centre for Ocean Research Kiel in Germany, who was not involved in the research.

Study author Sonia Consuegra of Aberystwyth University, UK, and her collaborators focused on the major histocompatibility complex (MHC) — a set of cell-surface molecules that help vertebrates to initiate immune responses against pathogens. Consuegra and her team analysed 183 mangrove rivulus, a small, long and slender fish, gold or brown in colour, that is native to mangrove ecosystems in Florida, the Caribbean, and Central and South America.

About 40% of the fish were collected from the wild, the rest belonged to two different laboratory lines that had undergone at least 10 generations of self-fertilization. The researchers screened a subset of the fish for parasites in the gills and gastro-intestinal tract, and analysed the variation in their MHC genes and in 32 'microsatellite loci' — repeating sequences of DNA that the authors used to estimate genome-wide diversity.

Among laboratory fish, those that had undergone more generations of self-fertilization had lower MHC and microsatellite diversity, and carried more parasites, while the wild populations had higher genetic diversity. When the researchers plugged the data into basic statistical models, they found MHC diversity to be a better predictor of parasite resistance than genome-wide microsatellite diversity. The findings suggest that, in wild populations, low levels of outcrossing would produce enough variability in immune-system genes to better deal with parasites.

The researchers also found evidence that the distribution of MHC alleles — different versions of the same gene — was affected by positive selection, whereby an advantageous allele's frequency within a population increases. This suggests that a few divergent MHC alleles were preserved in a non-random fashion because they offer a selective advantage, perhaps by helping to fight a broader range of pathogens.

"This should make all of us aware that conservation programmes and breeding designs being used in zoos, for instance, should consider diversity in MHC genes for endangered species," Eizaguirre says.

Consuegra agrees that MHC diversity could be encouraged by "facilitating mate choice in breeding programmes," adding that the findings "will generalize to other species that self-fertilize or are naturally inbred, and to any species that is in decline".

But conservationists should be cautious about expanding the findings to other species, says Joachim Kurtz, an evolutionary ecologist at the University of Münster in Germany, who was not involved in the study. "This system, which is adapted to self-fertilization, and therefore to inbreeding, is probably different from populations that are inbred because of population bottlenecks," he says.

Another caveat is that the data were correlational, Kurtz adds. Experiments could allow researchers to determine the causal relationship between MHC diversity and resistance to infections, he says. "This is the future direction for that model organism."