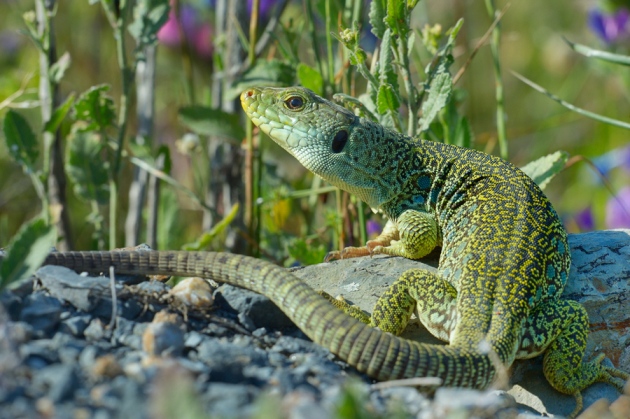 The convoluted pattern on the backs of ocellated lizards is the result of a highly coordinated effort between skin cells.

As adults, ocellated lizards (Timon lepidus) sport a convoluted pattern of black and green on their backs. Colour patterns aren’t rare in animals, but the ocellated lizard develops its labyrinthine palette in an unusual way.

Researchers found that some scales on the lizard’s back change colour during the transformation from juvenile to adult after detecting the colour of neighbouring scales. The team described these scales as decision-making units in a study1 published on 12 April in Nature.

A set of mathematical rules called Turing equations describes how many animals, including lizards, develop stripes or spots. The resulting 'Turing patterns' are continuous across the organism and are determined independently of other biological features, such as lizard scales. But the backs of adult ocellated lizards have a discrete pattern that is linked to individual scales. (The scales on this species are made of clear keratin, so the colours of the underlying skin shine through: each is either black or green.)

“That’s what makes the paper exciting,” says systems biologist James Sharpe of the Centre for Genomic Regulation in Barcelona, Spain. “Biology tends to be rather flexible and squishy, and this is digital and discrete.”

To investigate this phenomenon, Michel Milinkovitch, a biophysicist at the University of Geneva in Switzerland, and his colleagues took high-resolution photographs of the backs of three male lizards. The researchers began when the animals were two weeks old and continued until the lizards were three or four years old. The team used the images to track the fates of about 5,000 hexagonal scales across the back of each reptile.

As each lizard aged, the overall pattern on their backs went from brown with white spots to a convoluted pattern of green and black. Roughly 1,500 scales changed colour, such that green scales had four black and two green neighbours, whereas black scales had three black and three green neighbours. This ‘mind the neighbours’ behaviour reminded Milinkovitch of a process called a cellular automaton.

Cellular automatons, first described in terms of computer science, are self-replicating units that perform calculations. In ocellated lizards, this means that an individual scale sums up information from the ones around it — how many are black and how many are green — and makes a decision about its own colour.

“We could have stopped there,” says Milinkovitch. But he wondered why the lizards don’t follow the Turing-pattern rules that govern the markings on most other animals.

To find out, the team focused on the lizards’ skin cells. Lizards and fish have skin composed of various cell types that generate different colours. And researchers know that zebrafish skin cells, for example, interact with each other to establish Turing patterns.

Milinkovitch and his team modelled the interactions between colour cells on the basis of equations derived from zebrafish data and compared their results to the patterns on the lizards’ skin. They found that ocellated lizard skin is thick under each scale, which provides room for cells to interact. But between scales, the skin is thin, with less room for cells to connect. The decreased thickness limits the colour to within individual scales on the lizards’ back. This suggests that animal skin bumpiness can disrupt a continuous Turing pattern.

The development of colour patterns in animals is usually described qualitatively, says Devi Stuart-Fox, an evolutionary biologist at the University of Melbourne in Australia. The ocellated lizard’s patterning probably helps the animal to blend into its environment. “But when you can show that there are general mathematical principles that can describe biological processes,” she says, “it provides a nice conceptual framework to understand what’s happening.”