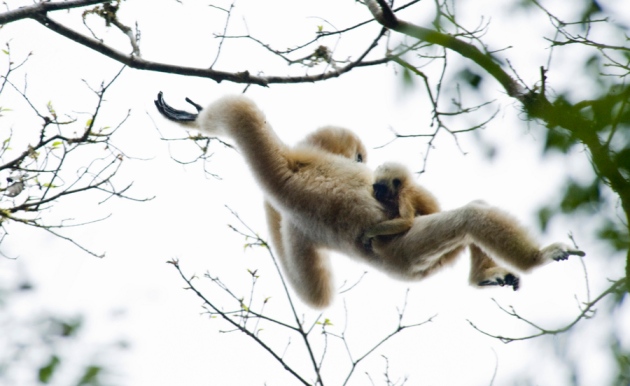 Gibbons leap from tree to tree at speeds that can exceed 55 kilometres an hour.

Asia, a white-cheeked gibbon living in a Virginia zoo, is the first of the long-armed, tree-swinging apes to have its genome decoded. Her DNA sequence, and those of seven other gibbons — a total of six different species — help to explain how these apes adapted to life in the trees. They also may explain why gibbons are so diverse compared with the great apes — humans, chimpanzees, gorillas and orangutans.

Gibbons are renowned for their dexterity in dense tree canopies, traversing as far as 15 metres a swing and at speeds of more than 55 kilometres an hour. The group encompasses four genera and as many as 19 species all living in the forests of tropical Asia, from the silvery gibbon (Hylobates moloch) in Java to the western hoolock gibbon (Hoolock hoolock) in northeastern India.

Geneticists are fascinated by gibbons because they were the first of the apes to branch off from the common ancestor they share with both humans and monkeys. And gibbons have peculiar chromosomes. Compared to other apes, their genomes have many more chromosomal rearrangements, such as duplications, deletions or inversions of large stretches of DNA, that can affect how genes work.

“Chromosomal rearrangements are like earthquakes: one event will completely change the landscape, and you will see it after one generation,” says Lucia Carbone, an evolutionary geneticist at Oregon Health and Science University in Portland, who led the gibbon genome effort. “What we found in the gibbon genome was that there were a lot of earthquakes.”

The authors attribute the explosion in gibbon diversity to a type of ‘jumping gene’ — a stretch of DNA that can change its position in the genome — that is found in gibbons alone among the primates. This chunk of DNA landed near genes involved in chromosome replication, making the genome more prone to rearrangement, they suggest. Chromosomal rearrangements can prevent two individuals from breeding and thus speed speciation.

The team also found that the four different gibbon genera all seem to have evolved simultaneously between 4 million and 5 million years ago, when fluctuating sea levels began to divide up the Southeast Asian forests, creating geographical barriers that would restrict mating between groups. The work is published in the 11 September issue of Nature1.

The unique treebound lifestyle of gibbons may have also helped them to thrive. Carbone and her team found that genes involved in bone and cartilage development and in making collagen seem to have evolved faster in gibbons than in other apes. “This makes perfect sense, because gibbons have modified tendons and flexors that allow them to be such strong climbers,” she says.

“That could be the key to their success — the fact that they have managed to adapt to this environment that is prevalent in Southeast Asia,” says Aylwyn Scally, an evolutionary geneticist at the University of Cambridge, UK. Orangutans, by contrast, are on the brink of extinction in the same region, owing to habitat loss. “Gibbons have managed to survive in the same situation,” he says.

Gibbons are doing well compared to other great apes, but some species are at high risk of extinction. The population of black-crested Hainan gibbons (Nomascus hainanus), who live only in a small pocket of China’s Hainan Island, is estimated to be down to just 23–25 members.

Carbone, who has a white-cheeked gibbon at a California conservation centre named after her, says that she hopes that a gibbon genome will help conservation efforts by making it easier to assess genetic diversity and allocate resources.