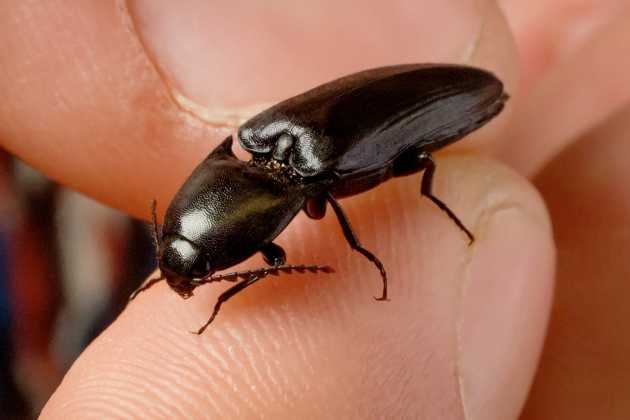 Click beetles have a hinged body that can propel them to great heights.

A beetle that can launch itself spectacularly into the air after falling on its back — flipping right side up without having to use its legs — could inspire a new generation of smart robots.

Imagine a rescue robot vaulting its way through a disaster zone riddled with obstacles, or a planetary robot extricating itself from an unexpected tumble on Mars. Each might use a trick or two learnt from the click beetles, a family of insects with the unique ability to catapult themselves out of trouble.

“A lot of robots out there jump using their legs,” says Aimy Wissa, a mechanical engineer at the University of Illinois in Urbana-Champaign. “What’s unique about this is if something breaks, you can still jump without legs and get out of the situation.”

Wissa and her Illinois colleagues, led by mechanical-engineering graduate student Ophelia Bolmin, described the mechanics of jumping click beetles on 7 November at a meeting of the Entomological Society of America in Denver, Colorado. They published early results in the proceedings of a bio-inspired robotics conference in July1.

So far, the scientists have studied how click beetles manage to store and hold the energy needed to launch themselves into the air. They hope to soon start building prototype machines designed after the beetles.

There are about 10,000 species of click beetles around the world. The insect’s head and body are connected by a hinge that the beetle can slowly arch and then suddenly snap in the opposite direction, jack-knifing its body and sending it into the air with an audible ‘click’. Earlier work has shown that the beetles launch nearly vertically before somersaulting through the air2.

Ophelia Bolmin/University of Illinois at Urbana-Champaign

Click beetles can launch themselves up with surprising force.

If the beetle lands on its back, it just does the same manoeuvre again. Compare that to an upended ladybird — also known as a ladybug — which has to wiggle around on its back until it manages to roll over far enough and get traction with its legs to flip itself over.

The Illinois team wanted to analyse how the click beetles pull off their acrobatic feat. “We thought we could look at, how do they really jump, how is that energy being released?” says Marianne Alleyne, an entomologist on the team.

Students measured the dimensions of dozens of beetles of four species (Alaus oculatus, Ampedus nigricollis, Ampedus linteus and Melanotus spp.), videotaped their jumps with high-speed cameras and analysed the energy required for the beetles to pull the hinge back and then release it. Muscles alone are not enough, because they contract relatively slowly, and so other body parts such as tendons must also be involved, the team says.

The researchers also measured the force drop as the hinge snapped shut, confirming that it corresponded to the click as the beetle begin to soar skyward. They are now analysing the energies involved as beetles of different sizes make the jump. Click beetles can range from just a few millimetres to a few centimetres long; early results suggest that the bigger the beetle, the higher it can jump, Wissa says.

Other engineers have developed a range of agile robots that can jump using their legs — including one inspired by the Senegal bushbaby (Galago senegalensis), which has the highest vertical jumping ability of any animal3. Compared with crawling, jumping is a fast and efficient way for small robots to get around obstacles, says Mark Cutkosky, a mechanical engineer at Stanford University in California.

The advantage of the beetle approach is that something could go wrong with the robot’s legs, and it could still get out of its predicament, Wissa says. “It simplifies the design a lot.”

Any robots inspired by the click beetle would probably have to be quite small — perhaps a few tens of grams, says Gal Ribak, a biomechanics specialist at Tel Aviv University who has studied the beetles’ jumps4. “Otherwise, the jumping mechanism will require too much energy to lift the body into the air, and the repeated impacts at take-off and landing would result in mechanical damage,” he says.

But those constraints might not apply to robots exploring planets other than Earth. On worlds with lower gravity, beetle-like robots could fly high.