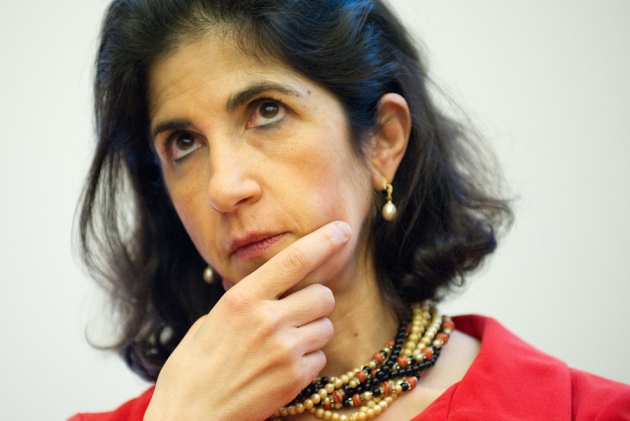 Former ATLAS leader Fabiola Gianotti will take the helm at CERN in January 2016.

Fabiola Gianotti, the Italian physicist who first revealed to the world that the Higgs boson exists, will be the next director-general of CERN, the laboratory where the elementary particle was discovered.

Gianotti will be the sixteenth person — and the first woman — to lead the European physics powerhouse, which is based at the Switzerland–France border near Geneva, and recently celebrated its sixtieth anniversary. She was the spokeswoman for ATLAS, one of two experiments at CERN’s Large Hadron Collider (LHC) that discovered the Higgs boson. Proving the particle's existence completed the standard model of particle physics.

“Fabiola is a superb scientist, led ATLAS to a great discovery and is respected and well known around the world,” says Nigel Lockyer, the director of the Fermi National Accelerator Laboratory (Fermilab) in Batavia, Illinois. “She fully understands that high-energy physics is a global enterprise, and CERN is at the centre.”

“Congratulations to Fabiola — and also congratulations to CERN, because I think CERN will be in very good hands,” said the current director-general, Rolf-Dieter Heuer, at a 4 November press conference in Geneva announcing the appointment. Gianotti will take over from Heuer on 1 January 2016.

On 4 July 2012, following days of Internet rumours and speculation, Gianotti took the stage in CERN’s auditorium and detailed the proton collisions detected by ATLAS that provided evidence for the existence of the Higgs boson. Joe Incandela, her counterpart at CERN's CMS, the other experiment hunting for the particle, spoke next, revealing similar data (see ‘Physicists declare victory in Higgs hunt’).

Peter Higgs and François Englert, two of the theoretical physicists who first proposed the particle, shared the 2013 physics Nobel Prize.

The choice of director-general took one year, said Agnieszka Zalewska, president of the CERN council. A search committee offered the council a short list of three candidates: Gianotti; Frank Linde, who heads the Dutch National Institute for Subatomic Physics in Amsterdam; and Terry Wyatt, a particle physicist at the University of Manchester, UK, and a former co-spokesperon of DZero, an experiment that was based at the now-defunct Tevatron particle accelerator at Fermilab.

The LHC is currently shut down for a major upgrade. It is due to start accelerating particles again in March 2015 and collecting data by the summer. The collider might still have decades of science ahead of it. Although some physicists have been disappointed that the LHC has not yet found new fundamental particles apart from the Higgs boson, many hope that the higher collision energies of its next run will put new physics within reach.

“To me, the full exploitation of LHC is the main priority and the main objective,” Gianotti said at the press conference. She also said that CERN should look beyond the LHC and continue to develop technology for future colliders, “to reach the highest energies possible at an affordable cost”.

Gianotti also stressed what she described as the laboratory’s impact beyond science. “CERN is a concrete example of worldwide, international cooperation — and a concrete example of peace,” she said. “The place which makes, in my opinion, better scientists but also better people.” The laboratory was founded by 12 countries as the Conseil Européen pour la Recherche Nucléaire (European Council for Nuclear Research) in 1954, when the continent was recovering from the Second World War. It has since grown to 21 members, plus a number of other countries and organizations with so-called 'observer status', many of them non-European.

On the topic of women in science, Gianotti said that women who are highly successful researchers and managers can provide inspiration for young girls who might be interested in having a career in science. “We will have to be very vigilant that young female scientists have the same opportunities as their male colleagues,” she added.

The future CERN director also took questions about a less serious topic: the choice of 'Comic Sans' as the font for her 2012 Higgs presentation, which prompted much teasing at the time as it seemed  incongruous with the solemnity of the discovery. Answering a reporter's question at the 4 November press conference, she said that she would only stop using the font if that were a requirement of the new job. But after getting a nod from Zalewska, she said: “Then I will stick to it.”

Gianotti has more than a year to prepare for the job. She said that she will spend that time shadowing Heuer and talking to as many people as possible. “Her managerial style is based on listening carefully to everybody and digging thoroughly in all details,” says Guido Tonelli, a former spokesman for the CMS collaboration. Although CMS and ATLAS were competitors, he says, he and Gianotti maintained a close friendship throughout the hunt for the Higgs.