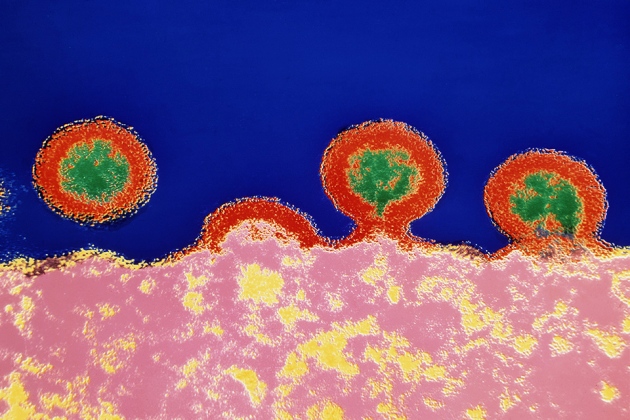 Attempts to cure HIV have been thwarted by a particular type of immune-system cell that can hide the virus. These long-lived infected T cells can evade detection by the body for years, and are hard to find, study and kill. Reliably identifying these covert reservoirs is top of the wish-list for HIV researchers, but they've had limited success.

That may soon change with the identification of a protein called CD32a. It sits on the surface of T cells that are infected, but lie dormant. Researchers reported their findings on 15 March in Nature1. Like a police sketch of a criminal, the protein provides a way to distinguish these sleeper T cells from other immune-system cells. And it provides hope that scientists could target these silent, infected cells and destroy them.

Antiretroviral drugs prevent the virus from spreading throughout the body and the immune system targets cells that are actively transcribing viral DNA. But because a small fraction of infected T cells lie dormant, the viral genome within remains silent and neither the drugs nor the immune system detects the intruder. Known as the 'latent reservoir', these cells become a problem if a patient stops taking antiretroviral therapy. They can slowly awaken, allowing the virus to replicate freely.

“Since 1996, the dream has been to kill these na­­sty cells in hiding, but we had no way to do it because we had no way to recognize them,” says Monsef Benkirane, a virologist at the University of Montpellier in France, and lead author on the study.

In 2012, HIV researchers attempted a new approach to targeting dormant, infected T cells. Called 'shock and kill', the therapy was supposed to kick-start viral replication in these latently infected T cells. In theory, the immune system and HIV drugs should then be able to locate and attack the cells. However, results up to now have been unimpressive in patients, says Steven Deeks, a virologist at the University of California, San Francisco, perhaps because the drugs used to shock the cells have failed to stimulate enough of the HIV reservoir to show itself.

Virologists lack even basic knowledge of the reservoir, because latently infected cells are exceedingly hard to find in the body. It was Benkirane’s quest to solve that problem that led him and his team to the CD32a protein marker. The researchers exposed resting T cells to fluorescently tagged HIV in the lab, and searched for differences in gene expression between cells infected by the marked virus, and those that weren’t. A subset of the quiescent infected cells turned on a gene, which coded for CD32a, that was almost undetectable in uninfected cells. The researchers also determined that the protein is not expressed at significant levels in cells actively producing HIV.

Using an antibody that sticks to CD32a, the researchers then pulled cells expressing the protein out of human blood samples from HIV-infected people. As expected, these were quiescent T cells harbouring HIV. “You absolutely could not have done that before now,” Benkirane says.

Deeks hopes that the new protein target, or biomarker, accelerates research on a cure, in the same way that tests to measure the amount of virus in a sample helped to develop antiretroviral therapy in the late 1990s.

The next steps will be to replicate the findings by screening blood from patients of different genders, ethnicities, ages and stages of the disease, says Tony Fauci, director of the US National Insitute of Allergies and Infectious Disease in Bethesda, Maryland. Scientists will also test tissues that HIV usually infects, including the gut and lymph nodes. The ultimate goal, if CD32a turns out to be a reliable marker, is to use it to target drugs to the latent cells.

For now, Fauci is excited but cautious about the potential of CD23a. His hesitancy comes from two decades of research searching for a cure that has proved elusive. “I really hope this is correct,” he says. “The fact that this work has been done by such competent investigators, and the data looks good, makes me optimistic.”