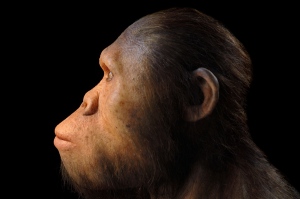 The tiny bones in the middle ear of Australopithecus africanus already showed modern human features, which may be related to the evolution of language.

A study of two ancient hominins from South Africa suggests that changes in the shape and size of the middle ear occurred early in our evolution. Such alterations could have profoundly changed what our ancestors could hear — and perhaps how they could communicate.

Palaeoanthropologist Rolf Quam of Binghamton University in New York state and his colleagues recovered and analysed a complete set of the three tiny middle-ear bones, or ossicles, from a 1.8-million-year-old specimen of Paranthropus robustus and an incomplete set of ossicles from Australopithecus africanus, which lived from about 3.3 million to around 2.1 million years ago. The ossicles are the smallest bones in the human body, and are rarely preserved intact in hominin fossils, Quam says.

In both specimens, the team found that the malleus (the first in the chain of the three middle-ear bones) was human-like — smaller in proportion compared to the ones in our ape relatives. Its size would also imply a smaller eardrum. The similarity between the two species points to a “deep and ancient origin” of this feature, Quam says. “This could be like bipedalism: a defining characteristic of hominins.”

Quam and his colleagues publish their results this week in the Proceedings of the National Academy of Sciences1.

Echo from the past

It is hard to draw conclusions about hearing just from the shape of the middle-ear bones because the process involves so many different ear structures, as well as the brain itself. However, some studies have shown that the relative sizes of the middle-ear bones do affect what primates can hear2. Genomic comparisons with gorillas have indicated that changes in the genes that code for these structures might also demarcate humans from apes3.

Callum Ross, an evolutionary morphologist at the University of Chicago in Illinois, says the discovery of these ossicles was “a step in the right direction in the understanding of human hearing”. However he says he is “underwhelmed” by the findings, especially given that his own research4 has found that differences in the size and shape of the outer ear have a greater influence on the hearing sensitivities of primates than the dimensions of the middle-ear bones.

Ross also says that changes in the hearing apparatus are unlikely to have had as much impact on human cognition as the other morphological changes our ancestors experienced. “The truly important changes are in bipedalism, the feeding apparatus and, ultimately, brain size,” he says.

But Quam is confident that his team will soon demonstrate the importance of changes in the ossicles. “We are going to try and reconstruct the hearing capacities of these same specimens: then we will be able to say something about their sensory ecology,” he says.