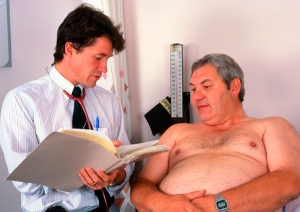 The link between cancer and obesity may be related to changes in gut fauna, at least in obese mice with liver cancer.

The gut bacteria of obese mice unleash high levels of an acid that promotes liver cancer, reveals one of the first studies to uncover a mechanism for the link between obesity and cancer. The research is published today in Nature1.

“Obesity in general has many different types of cancer associated with it,” says Eiji Hara, a cancer biologist at the Japanese Foundation for Cancer Research in Tokyo and one of the study authors. But in the case of liver cancer, he says, “I never expected the microbiome was linked.”

Hara and his colleagues initially set out to study how dying cells influence obesity-linked cancers. Cells that are irreparably damaged or pre-cancerous can become senescent — meaning that they stop dividing for overall health of the organism. But before senescent cells die, they can spew out chemicals that may cause inflammation and promote cancer development.

To examine whether senescent cells are involved in obesity-induced cancers, Hara and his colleagues worked with genetically engineered mice whose cells emit light upon becoming senescent. They then primed the mice by exposing them to a carcinogenic chemical, a process that Hara says may be similar to humans’ exposure to environmental toxins, such as air pollution. Researchers then fed the mice either a normal diet or a high-fat diet.

Although the results showed that cell senescence was involved in obesity-linked cancer in the mice, Hara and his colleagues did not initially understand why the liver became a hotbed for tumours. But when they compared the blood serum of the two groups of mice, they found that the obese mice had much higher amounts of deoxycholic acid (DCA), a chemical that causes DNA damage and can induce cell senescence.

Deliver to the liver

DCA is a by-product of metabolism in intestinal bacteria. In the gut, certain types of microbes convert bile acids — which aid in fat digestion — to the more harmful DCA, which is then absorbed into the bloodstream and delivered to the liver.

Peter Turnbaugh, a systems biologist at Harvard University in Cambridge, Massachusetts, says that the data provide a clear example of how the metabolism of gut microbes links obesity and cancer. “They’ve uncovered a nice story,” he says.