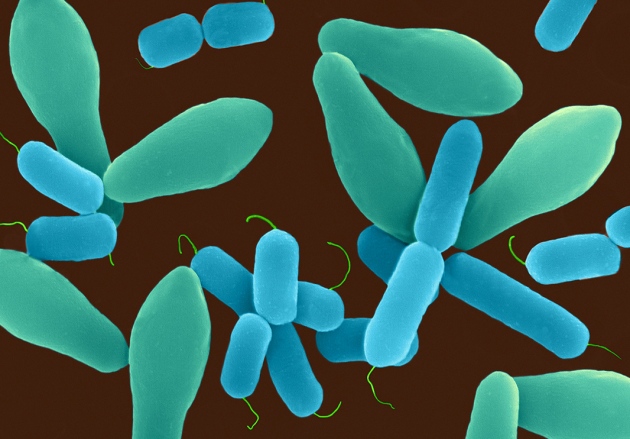 Gut bacteria such as these Clostridium could improve a patient's reponse to cancer immunotherapies.

Cancer immunotherapies unleash the body’s immune system to fight cancer, but microbes living in a patient’s gut can affect the outcome of those treatments, two research teams have found.

Their studies, published on 2 November in Science1, 2, are the latest in a wave of results linking two of the hottest fields in biomedical research: cancer immunotherapy and the role of the body's resident microbes, referred to collectively as the microbiome, in disease.

They also highlight the impact of antibiotics on cancer immunotherapies, particularly drugs that block either of two related proteins called PD-1 and PD-L1. One of the studies found that people treated with antibiotics for unrelated infections had a reduced response to these immunotherapies.

“It raises important questions,” says cancer researcher Jennifer Wargo of the University of Texas MD Anderson Cancer Center in Houston, and an author of one of the studies. “Should we be limiting or tightly monitoring antibiotic use in these patients? And can we actually change the microbiome to enhance responses to therapy?”

The composition and diversity of the microbiome has been linked to everything from mental-health disorders to some side effects of cancer chemotherapy. In 2015, researchers working on mice reported that a specific genus of bacterium in the gut enhanced anti-tumour responses to drugs that target PD-L13.

Wargo saw a presentation about the work at a cancer meeting several years ago. “I was floored,” she says. Wargo saw an opportunity to expand the work to humans through her access to clinical samples at MD Anderson.

Wargo teamed up with epidemiologist Vancheswaran Gopalakrishnan and other researchers to collect faecal samples from more than 100 people with advanced melanoma before they began treatment with anti-PD-1 immunotherapy drugs. The scientists found that those who had the most diverse gut microbes were most likely to respond to the immunotherapy1. And tumour growth was reduced in mice that received faecal transplants from people who responded to immunotherapy.

A second study2 showed that people who received antibiotics to treat infections shortly before or after starting immunotherapy did not respond as well to PD-1-blocking therapies. The researchers — led by cancer immunologist Laurence Zitvogel and cancer biologist Guido Kroemer, both of the Gustave Roussy Cancer Campus in Villejuif, France — also found that the presence of the bacterium Akkermansia muciniphila in both humans and mice was linked to better responses to immunotherapy.

Although it’s too early for clinicians to change how they use antibiotics in people with cancer, the work is a step beyond previous studies that relied mainly on mouse models of cancer, says immunologist Romina Goldszmid of the National Cancer Institute in Bethesda, Maryland.

Now, she says, researchers need to learn more about how those microbes exert their influence on the immune system. “What’s really missing in the field, rather than knowing who is there and who isn’t there, is knowing what the bugs are doing,” she says. “We need more information about that.”