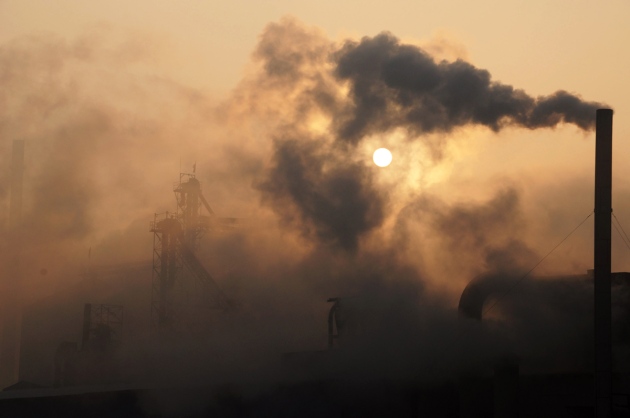 If this year's expected global output of cement were somehow poured across Manhattan island, the 3.4-billion-tonne mass would solidify into a monolith about 14 metres high. If the monolith were created next year, it would probably be even bigger, given the construction boom now under way in developing nations such as China and India. Cement is a crucial raw material for civilization, holding together artefacts ranging from the 2,000-year-old Pantheon in Rome to modern skyscrapers and highways.

Unfortunately for Earth's climate, however, the most widely used form of that material today — 'portland' cement — is made by roasting limestone and clay in giant kilns in a process that sends nearly a tonne of carbon dioxide skywards for every tonne of final product. The manufacture of portland cement accounts for roughly 5% of all human-generated greenhouse-gas emissions.

Worse, for researchers looking for ways to reduce emissions, cement is not just a commonplace, high-volume commodity; it is also one of the most complex substances known in materials science. From its structure and composition to the reactions that ensue when it is mixed with water and poured into a mould to set, “we still have some of the most basic questions about cement unanswered”, says Hamlin Jennings, director of the Concrete Sustainability Hub (CSHub) at the Massachusetts Institute of Technology in Cambridge.

“The details of what is happening once water touches cement powder are a matter of lively debate,” adds Kenneth Snyder, a cement expert at the US National Institute of Standards and Technology in Gaithersburg, Maryland. “There are almost religious wars over this.”

Nonetheless, the prospect of carbon taxes and cap-and-trade markets has led industry groups around the world to adopt green or sustainable cement initiatives. Their approaches range from supporting basic research to pushing to reform international building codes, and, if successful, could eventually cut the cement industry's carbon dioxide footprint by half.

The CSHub is one of the field's largest academic-research centres. Founded in 2009 with funds from industry sponsors totalling US$10 million over five years, the CSHub now comprises about a dozen principal investigators seeking to understand cement — from its function in various structures to its quantum-mechanical properties. It is a struggle, says Jennings, for reasons that become apparent when one considers what happens on the molecular scale when cement is made. 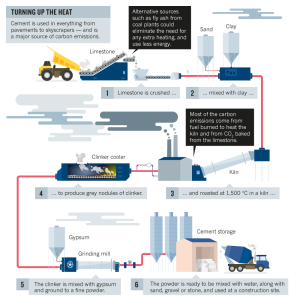 The cement-making process (see 'Turning up the heat') begins with a mix of limestone and aluminosilicate clay, he says, “each with its own chemistry and impurities”, which react in myriad ways as they are roasted together in a kiln at about 1,500 °C. What emerges are greyish, marble-sized chunks known as 'clinker'. Clinker contains silicon, iron and aluminium oxides (derived mostly from the clay) and calcium oxide, which forms when heat drives carbon dioxide out of the limestone's calcium carbonate. This carbon dioxide is one major source of emissions from the process; the fuel used for heating the kiln is the other. Once the clinker has cooled, it is combined with gypsum (the amount of which controls how fast the cement will set), milled into a powder having the consistency of flour and distributed to 'batch plants'.

There, cement powder is mixed with water to form a paste, the consistency of which depends on its intended use — in a bridge piling, say, or a pavement. Most often, the paste is mixed with sand, gravel or larger stones to form concrete. The concrete slurry is then trucked to the construction site and poured into a mould, where it cures in a process that begins quickly but can take months to complete.

“One of the miracles, and the subject of intense research,” says Jennings, “is that the mix stays fluid for the first few hours, after which a furious set of simultaneous chemical reactions starts to produce the products that lead to the hardening process.” Most important to the final material are the hydration reactions that turn the water and powdered clinker into artificial stone: a matrix of calcium silicate hydrate (CaO–SiO2–H2O, or C–S–H). “All construction on this planet relies on this liquid-to-stone transition,” says Roland Pellenq, a physical chemist at the CSHub.

But C–S–H is a maddeningly imprecise formula, Pellenq says. Its components have no set proportions, and the reaction products in a given sample of curing concrete depend on the initial ingredients, the amount of water used and the ratio of calcium to silicon, as well as additives, contaminants, temperature and humidity. And, of course, concrete is opaque, adding to the difficulty of analysing C–S–H as it forms.

Despite these challenges, says Pellenq, he and his colleagues at the CSHub are making progress on the carbon-emissions problem. One promising line of attack involves finding ways to reduce the roasting temperature and thereby burn less fuel. The major targets are alite and belite, two of the primary minerals in clinker that give rise to C–S–H. Alite (Ca3SiO5) is the more reactive of the two — it begins to cure within hours after the addition of water, giving concrete its initial strength. But alite requires the full 1,500 °C to form, whereas belite (Ca2SiO4) forms at about 1,200 °C. Belite is ultimately stronger, but takes days and even months to begin hardening — too long to be used on its own in construction projects. Pellenq and his colleagues are investigating whether some belite crystal structures might be as reactive as alite yet still form at lower kiln temperatures, saving fuel.

Because the answer to that question depends on atomic-scale details such as the distribution of electrons in the crystal, the researchers carried out quantum-mechanical calculations of how the structure of C–S–H is affected by aluminium, magnesium and other impurities (K. Van Vliet et al. MRS Bull. 37, 395–402; 2012). As Pellenq puts it, “to do quantum clinker engineering, you need to know where the electrons are”. The CSHub researchers found that alite crystals always contain one plane that dissolves more easily in water than the others, whereas in belite crystals, all faces are similar — and the crystal is less reactive with water (E. Durgun et al. Chem. Mater. 24, 1262–1267; 2012). This is why belite is slower to cure than alite. But Pellenq says that the results also suggest that certain impurities, such as magnesium, could help to make belite more soluble in water. This might allow it to cure fast enough to be used as the primary ingredient in cement for construction.

A move towards low-temperature belite could raise new problems, however. Franz-Josef Ulm, a mechanical engineer at the CSHub, and his team have found that it takes four to nine times more energy to grind belite into powder than alite, which could diminish the emissions benefits of using belite-rich clinker.

Others, such as Ceratech, a cement company in Alexandria, Virginia, are seeking solutions in alternatives to conventional clinker. The company has found inspiration in the cement used 2,000 years ago by the engineers of ancient Rome. The key ingredient was pozzolana, a type of volcanic ash that reacts with water to make cement — thus functioning as natural clinker. Ceratech is exploiting an industrial version of pozzolana: fly ash, the fine particles filtered out of the combustion gases from coal-burning electricity plants. US plants produce roughly 70 million tonnes of fly ash every year, most of which is stored or disposed of in landfills. Ceratech converts the ash into cement powder by combining it with several proprietary liquid additives. Because the process does not require heat, the company says that its fly-ash cements are carbon neutral.

Although batch plants have been making blends containing up to 15% fly ash for years, Ceratech's formulations are 95% fly ash and 5% liquid ingredients, says Mark Wasilko, the company's executive vice-president. In addition, he says, concrete made from fly-ash cement is stronger than the conventional variety, so designers can use less of it. The company says that in a typical three-storey, 4,600-square-metre building, the use of its fly-ash cement would reduce the total volume of concrete by 183 cubic metres and the total mass of steel reinforcing bars by about 34 tonnes; it would also divert 374 tonnes of fly ash from landfills and reduce carbon dioxide emissions by 320 tonnes.

At present, Wasilko says, Ceratech is a bit player in the cement industry, and its approach to cutting carbon emissions amounts to a mere clink in a multibillion-tonne batch. The big carbon reductions will come only when next-generation cements are embraced by the construction industry's thousands of independent producers, engineers, architects, city planners and building inspectors. And that means lowering the perceived risk of choosing greener cements over their time-tested, conventional counterparts. The concern seems to be: “If this road doesn't work, my boss will hammer me,” says Snyder.

That attitude might change if more countries adopt taxes or cap-and-trade schemes that make the cost of emitting carbon much higher than it is now. But a more tangible, near-term way to overcome the reluctance is to build demonstration structures, such as bridges, roads and buildings, to prove the real-world viability of the new cement and concrete materials. Wasilko says that he hopes the several dozen projects that the company works on each year, such as dock structures in the Port of Savannah, Georgia, and chemical-handling basins for Gulf Sulphur Services in Galveston, Texas, will serve that purpose.

There is reason enough to get going. In the eight minutes or so that it took to read this article, cement-makers dumped another 30,000 tonnes of carbon dioxide into the atmosphere.