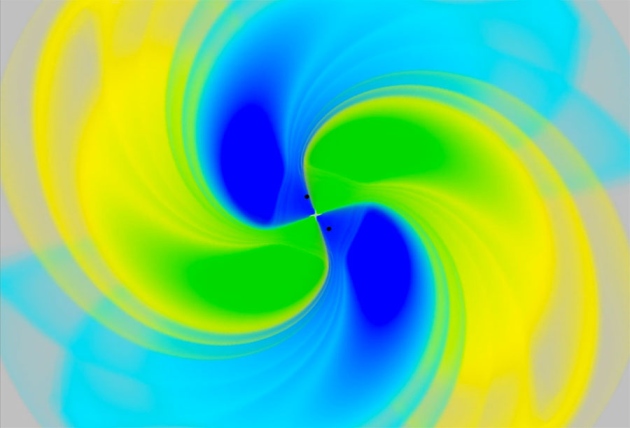 Mergers between black holes (simulation) are expected to be strong sources of gravitational waves.

The first direct detection of gravitational waves was announced on 11 February by the Advanced Laser Interferometer Gravitational-Wave Observatory (LIGO). Using LIGO's twin giant detectors — one in Livingston, Louisiana, and the other in Hanford, Washington — researchers measured ripples in space-time produced by a collision between two black holes.

LIGO live: Inside the hunt for gravitational waves

The announcement vindicates Albert Einstein’s prediction of gravitational waves, which he made almost exactly 100 years ago1 as part of his general theory of relativity — but it also has much further significance. As vibrations in the fabric of space-time, gravitational waves are often compared to sound, and have even been converted into sound snippets. In effect, gravitational-wave telescopes allow scientists to ‘hear’ phenomena at the same time as light-based telescopes ‘see’ them. (Already, members of LIGO and its smaller counterpart Virgo in Pisa, Italy, have set up a system for alerting communities working on other types of telescope.)

When LIGO fought to get US government funding in the early 1990s, its major opponents at congressional hearings were astronomers2. “The general view was that LIGO didn’t have much to do with astronomy,” says Clifford Will, a general-relativity theorist at the University of Florida in Gainesville and an early LIGO supporter. But things have changed now, he says.

Welcome to the field of gravitational-wave astronomy3: we take a look at the questions and phenomena that it can explore.

A simulation of two black holes spiralling into each other, and the gravitational waves they would produce.

One of the important scientific consequences of LIGO’s detection of a black-hole merger is, quite simply, that it confirms that black holes really do exist — at least as the perfectly round objects made of pure, empty, warped space-time that are predicted by general relativity.

Astronomers had plenty of circumstantial evidence for black holes, but until now, that had come from observations of the stars and super-heated gas that orbit black holes, not of black holes themselves.

“The scientific community, including myself, has become very blasé about black holes. We have taken them for granted,” Frans Pretorius, a specialist in general-relativity simulations at Princeton University in New Jersey, told Nature before the LIGO announcement. “But if you think of what an astonishing prediction it is, we really need astonishing evidence.”

LIGO’s signal has provided that evidence — and also confirms that mergers between two black holes proceed as predicted. A merger occurs when two black holes start to spiral towards each other, radiating energy as gravitational waves. LIGO detected the characteristic sound of these waves, called a chirp, which allowed scientists to measure the masses of the two objects involved in the event the observatory spotted: one about 36 times the mass of the Sun, and the other 29 solar masses.

Next, the black holes fuse. “It’s as if you get two soap bubbles so close that they form one bubble. Initially, the bigger bubble is deformed,” says Thibault Damour, a gravity theorist at the Institute of Advanced Scientific Studies near Paris. The resulting single black hole will settle into a perfectly spherical shape, but first, as LIGO saw, it radiates gravitational waves in a pattern called a ringdown.

Do gravitational waves travel at the speed of light?

When scientists start to compare observations from LIGO with those from other types of telescope, one of the first things that they will check is whether the signals arrive at the same time. Physicists hypothesize that gravity is transmitted by particles called gravitons, the gravitational analogue of photons. If, like photons, these particles have no mass, then gravitational waves would travel at the speed of light, matching the prediction of the speed of gravitational waves in classical general relativity. (Their speed can be affected by the accelerating expansion of the Universe, but that should manifest only over distances much greater than LIGO can probe4).

But it is possible that gravitons have a slight mass, which would mean that gravitational waves would travel at less than the speed of light. So if, say, LIGO and Virgo were to detect gravitational waves from a cosmic event, and find that the waves took slightly longer to arrive at Earth than the associated burst of γ-rays detected by a more conventional telescope, that could have momentous consequences for fundamental physics.

Is space-time made of cosmic strings?

A simulation of cosmic strings.

An even weirder discovery would occur if bursts of gravitational waves were detected coming from ‘cosmic strings’. These hypothetical defects in the curvature of space-time, which may or may not be related to string theory, would be infinitesimally thin but would stretch across cosmic distances. Researchers have predicted that cosmic strings, if they exist, might occasionally develop kinks; if a string snapped, it would suddenly release a burst of gravitational waves, which detectors such as LIGO and Virgo could measure.

Neutron stars are the remnants of bigger stars that collapsed under their own weight, becoming so dense that they pushed their constituent electrons and protons to fuse into neutrons. Their extreme physics is poorly understood, but gravitational waves could provide unique insights. For example, the intense gravity at their surface tends to make neutron stars almost perfectly spherical. But some researchers have theorized that there could still be ‘mountains’ — at most a few millimetres high — that make these dense objects, themselves about 10 kilometres in diameter, slightly asymmetrical. Neutron stars usually spin very rapidly, so the asymmetric distribution of mass would deform space-time and produce a continuous gravitational-wave signal in the shape of a sine wave, which would radiate energy and slow down the star’s spin. 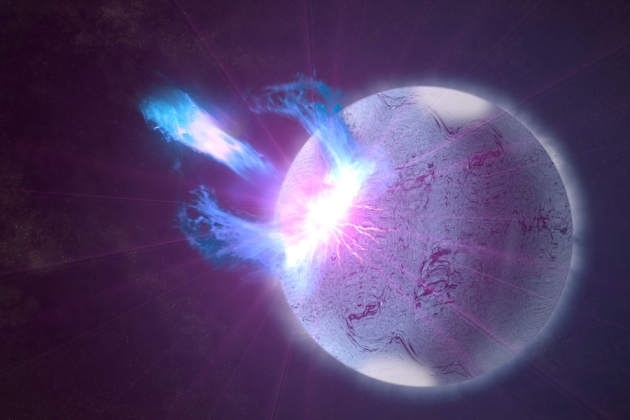 A ruptured neutron star (artist’s impression) could produce a burst of gravitational waves.

Pairs of neutron stars that orbit each other would also produce a continuous signal. Just like black holes, the stars would spiral into each other and eventually merge, sometimes producing an audible chirp. But their final instants would differ dramatically from those of black holes. “You have a zoo of possibilities, depending on masses and how much pressure neutron-dense matter can exert,” says Pretorius. For example, the resulting merged star could be a huge neutron star, or it could immediately collapse and turn into a black hole.

Black holes and neutron stars form when massive stars stop shining and collapse in on themselves. Astrophysicists think that this process is what powers a common type of supernova explosion, known as Type II. Simulations of such supernovae have not yet clearly explained what ignites them, but listening to the gravitational-wave bursts that real supernova are expected to produce could help to provide an answer. Depending on what the bursts’ waveforms look like, how loud the bursts are, how frequent they are and how they correlate with the supernovae as seen with electromagnetic telescopes, the data could help to validate or discard various, existing models. 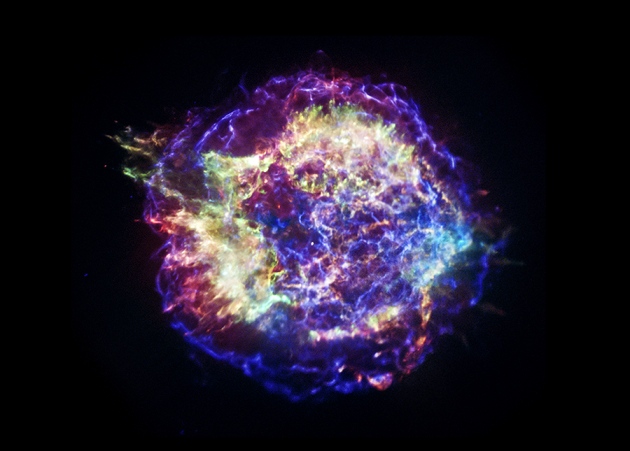 Cassiopeia A, a supernova remnant.

How fast is the Universe expanding?

The expansion of the Universe means that distant objects that are receding from our Galaxy look redder than they really are, because the light that they emit stretches as it travels. Cosmologists estimate the rate of the Universe’s expansion by comparing this redshift of galaxies with how far the galaxies are from us. But that distance is usually gauged from the brightness of ‘Type Ia’ supernovae — a technique that leaves large uncertainties.

If several gravitational-wave detectors across the world detect signals from the same neutron-star merger, together they will be able to provide an estimate of the absolute loudness of the signal, which will reveal how far away the merger occurred. They will also be able to estimate the direction it came from; astronomers could then deduce which galaxy hosted the merger. Comparing that galaxy’s redshift with the distance of the merger as measured by the loudness of the gravitational waves could provide an independent estimate of the rate of cosmic expansion, possibly more accurate than current methods.

(11 February): Updated to include details of LIGO's announcement.