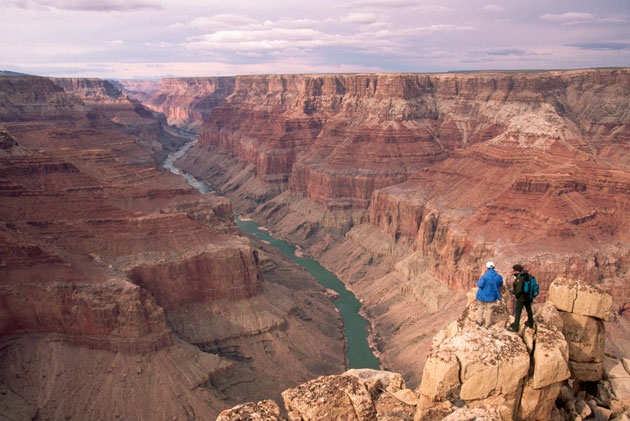 Marble Canyon, at the eastern edge of the Grand Canyon in Arizona, is just 5‒6 million years old.

A longstanding geological fight over the age of one of the most iconic landscapes in the United States — Arizona's Grand Canyon — may finally be over. The massive chasm does not date back 70 million years, as earlier work had suggested, but was born in its entirety 5‒6 million years ago when older, shorter canyons linked together to form the complete structure.

This explanation aims to reconcile a flurry of seemingly contradictory findings that enlivened discussion about when the canyon was carved.

“I think we’ve resolved the 140-year-long debate about the age of the Grand Canyon,” says Karl Karlstrom, a geologist at the University of New Mexico in Albuquerque. He and his colleagues describe the findings today in Nature Geoscience1.

Geologists agree that the colorful layers of rock that make up the canyon walls are ancient, dating back as much as 1.8 billion years. The debate focuses on a different number — when exactly the Colorado River began cutting through those layered rocks, forming the three-dimensional chasm that tourists swarm to today.

Scientists can date a canyon's formation with geochemical techniques that measure the temperature of rocks over time. The deeper a rock is buried, the warmer it is. When erosion removes the overlying rocks, as when a canyon forms, the rock is moved closer to the surface and cools down.

Grains of the mineral apatite contain several lines of evidence that can be used to trace a rock’s temperature history. For instance, the decay of radioactive uranium within the apatite produces helium atoms, which diffuse out of the mineral depending on how warm the rock is. In 2012, geologists Rebecca Flowers of the University of Colorado Boulder and Kenneth Farley of the California Institute of Technology in Pasadena used this technique, among others, to conclude that some now-exposed rocks in parts of the canyon must have been cool for as long as 70 million years3. In other words, they must have been at or near the surface for that long, indicating that the canyon must have existed for 70 million years.

In their study, Karlstrom and his colleagues used the helium technique, as well as other dating methods, to study rocks from the length of the Grand Canyon. The team found that two stretches near the canyon's middle are indeed quite ancient: the eastern Grand Canyon is 15‒25 million years old, and another stretch downriver is 50‒70 million years old.

But the researchers also found that two other segments — Marble Canyon, the farthest stretch upriver studied, plus the westernmost Grand Canyon — were carved far more recently. “Different segments of the canyon have different histories and different ages, but they didn’t get linked together to form the Grand Canyon with the Colorado River running through it until 5 to 6 million years ago,” says Karlstrom.

Still, these findings may not be the last word on the matter. Flowers points out that she and Karlstrom’s group have similar helium dates for the westernmost part of the canyon, and yet the teams come to wildly different conclusions about what those data mean. “It will take a bit more time to understand fully why their interpretations are so different from ours,” she says.

Small changes in assumptions can mean big changes in interpretation. For instance, some studies assume that the ground temperature at the surface is 25 degrees Celsius, whereas Karlstrom’s team used a range of 10‒25 degrees. Such changes mean big differences for interpreting how long a particular piece of apatite has been buried.

“That just hit me like a ton of bricks,” says Brian Wernicke, a Caltech geologist who has argued for an ancient canyon, of Karlstrom's choices. “They’re not thinking this through.”

Karlstrom says that it makes more sense to use a range of surface temperatures, as they probably varied over millions of years. It remains to be seen where the debate might move next.