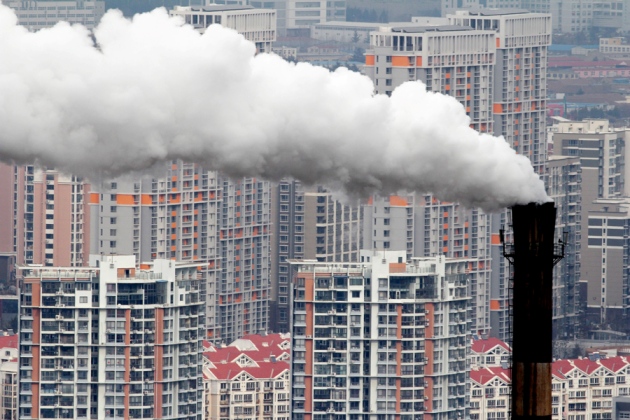 Slowing demand for coal in China should produce a drop in total global greenhouse-gas emissions for 2015.

Global emissions of carbon dioxide from burning fossil fuels and industry are on track to level off or perhaps even dip slightly this year, according to projections released on 7 December1. The surprising results have injected a bit of hope into the difficult international negotiations here over a master plan to avoid catastrophic climate change.

Researchers at the University of East Anglia, UK, and the Global Carbon Project found that carbon emissions could decline by 0.6% in 2015, a departure from a decade of growing 2.4% per year. The research, published in Nature Climate Change, attributes the decline to a reduction in China’s coal consumption as its economy slows and it moves to cleaner, renewable energy sources.

“China is trying to deal massively with its air pollution problem,” says study co-author Corinne Le Quéré, director of the Tyndall Centre for Climate Change Research at the University of East Anglia in Norwich. “And its renewables are growing very fast.”

The results are in line with a pair of analyses released earlier this year by the Netherlands Environmental Assessment Agency and the International Energy Agency, which show the rate of global emissions growth slowing significantly in 2014. 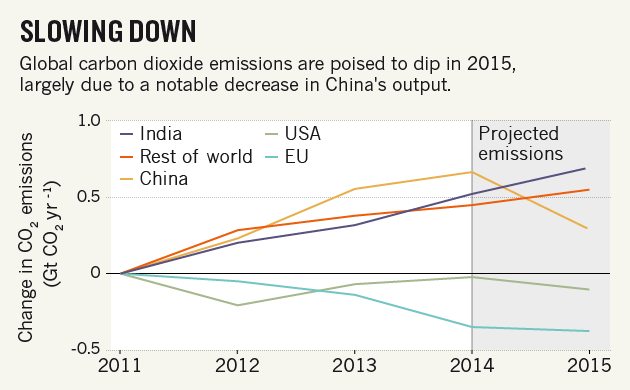 Although she finds the results encouraging, Le Quéré cautions that this year is more likely to be an anomaly than a departure from the trend of emissions growth that began with the Industrial Revolution. Since then, accumulating greenhouse gases have raised global temperatures by 1 °C, accelerating sea-level rise and amplifying extreme weather events. “The break has to do with China’s economic instability,” she says. “It’s unlikely to be a peak of emissions. A lot of emerging economies are based on coal, and in just a few years emissions are going to go up really rapidly.”

The projected dip for 2015 is based on available energy consumption data from China and the United States, as well as forecasts of economic growth for the rest of the world. Technical details are published on 7 December in the journal Earth System Science Data2. A final accounting of this year’s emissions could differ from these projections; the preliminary analysis suggests that emissions might drop by as much as 1.6% this year, but could actually rise by as much as 0.5%.

“To me, the biggest uncertainty is the Chinese data,” says Gregg Marland, a geologist at Appalachian State University in Boone, North Carolina, who was not part of the analysis. Researchers have made “heroic efforts” to deal with the uncertainty, but the risk of skewed results remains, says Marland, who spent 35 years estimating carbon emissions at Oak Ridge National Laboratory in Tennessee.

Last month, China corrected its official figures, acknowledging that it has been burning more coal than it previously estimated. Le Quéré says that she and her fellow researchers have incorporated the upward revision into their analysis, along with previous revisions. She hopes that the climate talks in Paris will result in a more rigorous and verifiable way for nations to track and report climate emissions.

“We don’t have the capacity to check the energy reports of the countries,” Le Quéré says. “We have to rely on the countries to tell us what types of coal they use and how clean it is. If the reporting was systematic, it would be wonderful.”

The 2015 emissions projections by Le Quéré’s group, and the 2014 emissions analyses by the Netherlands Environmental Assessment Agency and the International Energy Agency, all show an unusual pattern of a slowing in carbon emissions, despite a growing global economy. Previously, the only lulls in carbon emissions came during economic downturns, such as the collapse of the Soviet Union and the 2008 financial crisis.

US President Barack Obama emphasized this new trend in a 30 November speech in paris, saying that it has “broken the old arguments for inaction”. “We have proved that strong economic growth and a safer environment no longer have to conflict with one another.

Paris climate talks: The first week draws to a close

Nature reporter Jeff Tollefson sums up the first week of activity at the COP21 climate conference.

All eyes on China

The 2015 projections show that the United States and the European Union continue a slow decrease in carbon emissions, as they have in recent years. India’s emissions, which remain small, continue to curve upward, as do the collective emissions from the rest of the world.

China has emerged as the world’s biggest carbon emitter after 25 years of astronomical growth. Despite huge investments in solar, wind and other renewable energy sources, the country has not committed to a peak in its emissions until 2030. But the new projections show that China’s emissions are likely to decrease by 3.9% in 2015.

“Time will tell whether this surprising interruption in emissions growth is transitory or a first step towards emissions stabilization,” Le Quéré and her colleagues write in their Nature Climate Change analysis. Nevertheless, they say, it represents a welcome break from the idea that CO2 emissions increase in lock-step with economic growth.

The report does not fully reflect the carbon emissions associated with deforestation and other land-use changes, such as this year’s burning of Indonesia’s drought-stricken tropical forests to clear the land for agriculture.