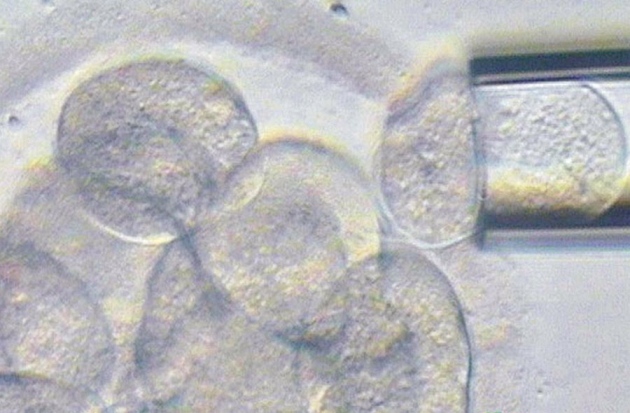 The steep fall in the cost of sequencing a genome has, for the moment, slowed. Yet researchers attending this year’s Advances in Genome Biology and Technology (AGBT) meeting in Marco Island, Florida, on 20–23 February are not complaining. At a cost as low as US$5,000–10,000 per human genome, sequencing has become cheap and reliable enough that researchers are not waiting for the next sequencing machine to perfect new applications in medicine.

Two recent beneficiaries: embryo screening after in vitro fertilization (IVF) and metagenomic medicine, which entails sequencing many different microbes en masse and then teasing out individual genomes to diagnose which ones are helping or harming human health. “The field is maturing,” says geneticist Jay Shendure at the University of Washington in Seattle.

At last year’s AGBT meeting, Oxford Nanopore, based in Oxford, UK, electrified researchers by unveiling details of a machine that could sequence DNA at unprecedentedly low cost and high speed — but that machine has not yet arrived on the market. This year, no splashy new technologies are expected. Instead, the HiSeq machine, made by Illumina, based in San Diego, California, has tightened its grip on the top end of the market (see ‘Reasonably priced genomes’). Borrowing a metaphor from computer-circuit development, quantitative biologist Michael Schatz at Cold Spring Harbor Laboratory in New York says that after many “tick” years of dramatic technological innovation, the field is now in a “tock” period as researchers fine-tune the technology and expand it into applications.

One application depends on single-cell genomics, a focus of this year’s meeting. To sequence a genome from a single cell, the DNA has to be amplified, a process that can introduce errors into the sequence. But new amplification techniques now allow accurate sequences to be obtained from individual cells, including the precious cells extracted from human embryos.

At the meeting, Dagan Wells at the University of Oxford, will describe how the technique can be used to select which of the embryos created by IVF has the best chance of developing into a healthy baby. Fertility experts already screen embryos for genetic abnormalities by extracting a single cell from each eight-cell embryo and running a variety of tests to detect chromosomal abnormalities, but this can cost around a thousand dollars per IVF cycle.

Instead, Wells extracts DNA from the sampled cell, amplifies it and sequences a part of the genome using the Personal Genome Machine, a fast sequencer made by Ion Torrent in Guilford, Connecticut, a subsidiary of Life Technologies in Carlsbad, California. Within a day, Wells can detect duplications or deletions of entire chromosomes — the abnormalities seen most often early in development. Several women are now pregnant with embryos selected using this technique, and a larger clinical trial is planned for later this year. Wells says that the low cost — as much as 50% less than current methods — should open up testing to more women.

Other researchers are refining existing technologies to increase the average length of the DNA strand that can be ‘read’ from the sequencer. The devices that dominate the field sequence short fragments of DNA, no more than a few hundred base pairs, and overlook some portions of the genome. Longer reads are needed, for example, to distinguish between closely related microorganisms — an important requirement for researchers studying whether overabundance of some microbial species in the gut or vagina make patients more susceptible to problems ranging from diarrhoea to premature birth.

Late last year, Illumina bought Moleculo, a company based in San Francisco, California, whose technology extends reads by changing the way that DNA is prepared for sequencing and by applying new analytical software to the readout. These tricks can coax reads thousands of bases long out of Illumina machines — an order of magnitude greater than previously possible. The machines produced by Pacific Biosciences in Menlo Park, California, also achieve read lengths that routinely reach into the thousands of bases, thanks to an engineered polymerase. Customers say that the company seems to have overcome early problems with reliability.

In market share, Pacific Biosciences still has a long way to go to catch Illumina or Life Technologies, which this month said that it expects sales of the Ion Torrent sequencing system to boost revenue by up to 5% in 2013. Corporate takeovers are a topic of fevered speculation in the sequencing world. Rumours that Life Technologies’ sequencing business may be acquired sent its shares soaring to their highest price ever. And Illumina recently fended off a hostile takeover bid by Swiss company Roche in Basel, which formally dropped its offer a month ago. But the fundamental landscape has not changed much.

Any reshuffling of the major players will have to wait for the field’s next ‘tick’ cycle, whether it takes the form of Life Technologies’ Ion Proton machine — which is just hitting labs and which the company says will eventually deliver a $1,000 genome in a day — or Oxford Nanopore’s GridION and MinION machines, which scientists still haven’t seen. In the meantime, says Shendure, “this year’s meeting will be less glitz and more science, and that’s great”.