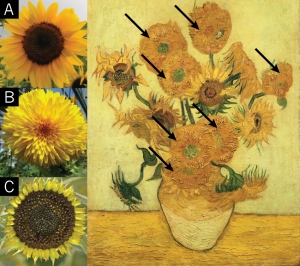 Researchers have identified the gene responsible for the ‘double-flowered’ (B) variations (black arrows in main picture) captured in Vincent van Gogh’s 1888 painting Sunflowers. A normal sunflower (A) and another mutation with ‘tubular’ florets (C) are shown for comparison.

A team of plant biologists has identified the gene responsible for the ‘double-flower’ mutation immortalized by Vincent van Gogh in his iconic Sunflowers series.

Van Gogh’s 1888 series includes one painting, now at the National Gallery in London, in which many of the flowers depicted lack the broad dark centre characteristic of sunflowers and instead comprise mainly golden petals. This was not simply artistic licence on van Gogh’s part but a faithful reproduction of a mutant variety of sunflower. In a paper published this week in PLoS Genetics1, researchers at the University of Georgia in Athens report that they have pinned down the gene responsible for the mutation, which they say could shed light on the evolution of floral diversity.

A wild sunflower (Helianthus annuus) is not so much a single flower as a composite of tiny florets. The golden ray florets, located at the sunflower’s rim, resemble long petals, are bilaterally symmetrical and do not produce pollen. That job belongs to the disc florets, tiny radially symmetrical blossoms that occupy the sunflower's darker centre. In combination, the two types of florets create the impression of a single large flower, and presumably an attractive target for insect pollinators.

“The success of the family is determined by floral strategy,” says plant biologist John Burke, who led the study.

Because changes in floral symmetry can affect how a plant interacts with pollinators — and therefore its reproductive fitness — the unusual sunflowers depicted by van Gogh piqued Burke’s curiosity.

He says that the diversity of traits seen in many species of flowering plants are thought to be related to the ‘CYC-like’ class of genes, named after the gene CYCLOIDEA. CYC-like genes control DNA transcription and influence floral morphology in Gerbera daisies and flowering weeds from the Senecio genus — which belong to the same family as sunflowers — but their function in sunflowers has been less understood.

“It’s been hypothesized that these genes could be responsible for driving the evolution of floral head diversity,” says Burke.

Double-flowered mutants present geneticists with a practical challenge as their relative lack of pollen makes it difficult to generate offspring. To surmount this, the researchers began by crossing a wild-type sunflower with a partial double-flowered mutant and then allowing the offspring to self-pollinate. Among the offspring was a new mutant with ‘tubular’ flowers, so named because of their resemblance to soda straws. The researchers soon traced the differences between mutant and wild-type sunflowers to insertions of chunks of DNA in the gene HaCYC2c. In the double-flowered mutants, there was one insertion; in the tubular flowers, there were two.

Previous studies had shown that HaCYC2c is highly expressed in ray flowers. The researchers found that in the double-flowered mutants, the first insertion increased HaCYC2c expression in all floral tissues, causing the centre disc flowers to appear more ray-like. In the tubular mutants, the second insertion mutation stops transcription of the gene, preventing proper ray flowers from forming.

“It looks like this gene is a key player in determining ray versus disc morphology in sunflowers,” says Burke. “Basically, if you turn the gene on in the wrong place, it’ll cause disc flowers to look like ray flowers. Conversely, if you knock the gene out, it causes the ray florets to become more disc-like.”

The researchers constructed a family tree tracking HaCYC2c over different sunflower family species. The results, they say, suggest that mutations in the gene evolved independently to influence floral shape, confirming earlier studies of other sunflower relatives.

“Other plants use the same tools to play the same games,” says Victor Albert, a plant scientist at the University at Buffalo in New York, who was not involved in the study. “This gene has popped up multiple times throughout evolution.”

Because sunflowers can reproduce by self-pollination and cross-pollination between individuals, it is possible that the mutations leading to tubular florets represent an adaptation. Ray flowers produce no pollen but attract pollinators, so the mutation could be an advantage in circumstances in which only self-pollination is likely. “When the plants are invading a new area, and there aren’t as many pollinators — why put energy into a ray floret when you don’t need to attract pollinators?” says Richard Abbott, a biologist at the University of St Andrews in Scotland who studies CYC-like genes in the Senecio genus.

In contrast, the double-flowered mutation immortalized by van Gogh it is unlikely to have been an adaptive feature, as such plants would have difficulty reproducing. “This sort of thing would be selected against under natural conditions,” says Mark Chapman, a co-author. “This was presumably a random mutation.”

In fact, says Chapman, it is likely that human plant breeders have perpetuated the mutation because of its striking appearance. But although the mutation it carries conveys a disadvantage, it has offered a window into the evolutionary history of the sunflower family.

“We’re interested in how these genes changed and evolved,” says Burke. “The mutations are a tool that allow us to ask questions.”