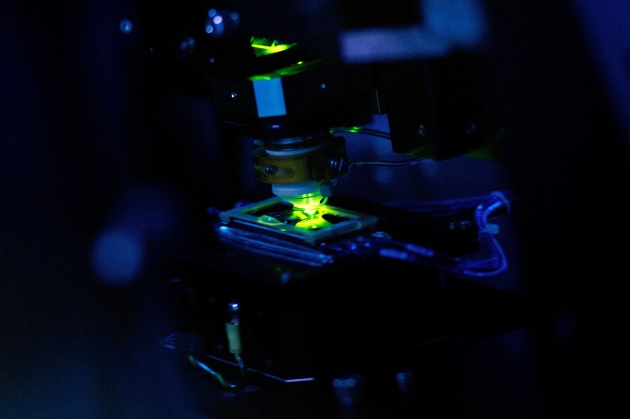 The market for bioinformatics services and software may soon surpass that for sequencing technologies, such as the one depicted here, in which laser light is used to help sequence DNA in glass slides.

For Chaim Jalas at the Center for Rare Jewish Genetic Disorders in New York, DNA sequencing is the easy part. It costs less than US$1,500 per person to have the important parts of his clients’ genomes sequenced. But it would be dauntingly expensive to maintain servers and staff to analyse the data and identify mutations that might be causing the undiagnosed diseases that afflict his clients’ families.

So Jalas, the centre’s director of genetics resources and services, has outsourced parts of the analysis. He uploads his clients’ sequencing data to cloud-computing software platforms, where he can run analyses without having to set up the infrastructure in-house. The cost is about $100 per person. And the cloud-based interfaces let him collaborate with doctors in Israel without worrying about repeatedly transferring data on slow Internet connections. “For me, it is convenient and cost-efficient,” he says.

Jalas and the way he works represent a new and mostly untapped market for a new crop of genetics interpretation and analysis firms, which will be touting for customers at a meeting of the American College of Medical Genetics and Genomics in Phoenix, Arizona, on 19–23 March. Dozens of these firms have emerged, some in the past year, as ever more affordable sequencing moves from academia into the clinic (see Nature 494, 290–291; 2013). Doctors will increasingly want to use sequen­cing data to guide decisions about patient care, but might not necessarily want to invest in staff and software to make sense of those data.

Where there is a need, there is also money to be made. The companies, many of them based in California’s Silicon Valley, have been tempted by a market in outsourced sequencing and analysis software that by 2016 could top $4 billion per year, according to BCC Research, a market-research company in Wellesley, Massachusetts (see ‘Genes in the marketplace’). “The sky’s the limit,” says Andreas Sundquist, chief executive of DNAnexus in Mountain View, California, which provides genetic-analysis software on its cloud-based platform and allows users to upload and run their own algorithms. 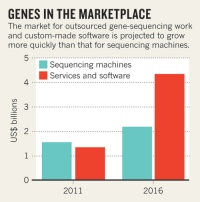 Other firms offer a range of approaches. Seven Bridges Genomics, based in Cambridge, Massachusetts, aims to be accessible to people with no expertise in bioinformatics, and provides access to free tools for designing custom-made analysis pipelines. Ingenuity Systems in Redwood City, California, allows users to upload a list of mutations in a person’s genome, and finds those most likely to cause disease. Personalis, down the road in Menlo Park, offers sequencing services and interpretation for clinicians and pharmaceutical and biotechnology companies. Last week, the company won a $1.53-million contract with the US Department of Veterans Affairs to look for genetic variants in samples from as many as one million military veterans, to explore the variants’ roles in disease. (The company will outsource the sequencing to Illumina, a market leader in sequencing technology based in San Diego, California.)

The activity is reminiscent of that a decade ago, when bioinformaticians started up a flurry of companies, most of which were unsuccessful because the path from a genetic-disease marker to a profitable drug has not been straight­forward. Today’s companies have moved on to other challenges, says Steven Brenner, a computational genomicist at the University of California, Berkeley. He says that they will have to prove that their products are better than freely available software — and do so without disclosing their intellectual property. “These companies have a tricky situation,” he says.

And they are facing competition from the sequencing-technology firms themselves. Last year, Illumina opened BaseSpace Apps, a marketplace for online analysis tools to be used on data uploaded to the company’s own cloud-computing platform. Information-technology companies are getting in on the action, too: Oracle, based in Redwood Shores, California, has its own products aimed at helping researchers and hospitals to analyse data.

But one of the biggest questions will be how deeply analysis companies can reach into medical settings, where privacy concerns are paramount. Hospitals can be fined if patient privacy is compromised, and clinical geneticists may be uneasy about uploading data to the cloud. “It’s your licence and your lab that go on the line when it comes to reporting a clinical result,” says Elizabeth Worthey, director of genomic informatics at the Human and Molecular Genetics Center at the Medical College of Wisconsin in Milwaukee. That is a large part of why many hospitals have so far chosen to build their own analysis infrastructure, says Ferreiro.

To address privacy concerns, Bina Technologies in Redwood City sells a server that can sit in a customer’s own data centre and is optimized to run genome-analysis software. Knome of Cambridge, Massachusetts, announced last year that it plans to sell $125,000 genome-analysis machines for use in customers’ labs (see Nature 490, 157; 2012).

It seems unlikely that any single analysis company will rule the market; the range of customers who need to interpret sequence data is growing, and each has their own needs. “We would rather see a thousand flowers bloom,” says Sundquist. “I don’t think we’re going to see consolidation anytime soon.”