The distribution of fallout from the crippled Fukushima Daiichi nuclear power plant has now been mapped by two independent teams. The charts reduce the uncertainty surrounding the amount of contamination across Japan, and help to show which areas should be safe to return to farming.

The accident at Fukushima occurred after a magnitude-9 earthquake and subsequent tsunami hit northeastern Japan on 11 March. The disasters knocked out the plant’s cooling system, causing several reactors to melt down and huge amounts of radioactive material to be emitted. One of the radionuclides released was caesium-137, which has a half-life of 30 years and poses a long-term health risk if absorbed by the soil in significant quantities. 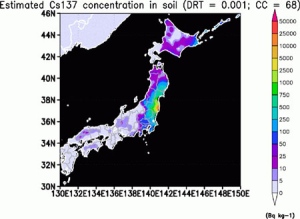 Japan-wide maps of soil concentrations of the radionuclide caesium-137 can help the government to work out which areas are likely to be safe for farming.

At the end of August, Japan’s Ministry of Education, Culture, Sports, Science and Technology (MEXT) released a map (see 'Directly comparing Fukushima to Chernobyl') showing caesium-137 concentrations in the soil from measurements at more than 2,000 locations in and around Fukushima. The map is helping the government to determine which areas can be returned to farming, which need their topsoil removed and which should be declared unfit for food production or even left uninhabited.

Two studies have now used different methods to map the fallout over larger areas. One1, led by Teppei Yasunari of the Universities Space Research Association in Columbia, Maryland, maps caesium-137 concentrations throughout the nation.

The researchers fed meteorological data into a computer model to estimate how the caesium-137 emitted by the reactors would have spread through the atmosphere and been dumped over the land or sea. Because accurate data on the rate at which radionuclides were emitted are not available, they used daily measurements of caesium-137 depositions, carried out by MEXT at a single location in each prefecture, to constrain the modelling results.

Because deposition measurements were not taken for the first few days following the accident, the model only considers contamination that occurred from March 20 onwards.

Even so, the group concluded that in eastern Fukushima prefecture, caesium-137 concentrations exceeded the government limit of 2,500 becquerels per kilogram (Bq/kg), which the researchers say is enough to “severely impair” food production. In several neighbouring prefectures, levels exceeded 250 Bq/kg, enough to “partially impact” farming.

In the second study[2], Norikazu Kinoshita of the University of Tsukuba and his co-workers collected soil samples from 108 locations in eastern Japan — in the Fukushima, Tochigi, Ibaraki, Saitama and Chiba prefectures. They measured the γ-ray spectrum of the samples to work out the concentrations of caesium-137 and four other radionuclides (iodine-131, tellurium-129m, caesium-134 and caesium-136) in the soil.

The team did not have permission to enter the 20-kilometre exclusion zone around the plant, but found high concentrations of all five radionuclides in the Iitate hill district to the northwest of Fukushima Daiichi and the Naka-Dori valley to its west.

Rain played a major role in flushing the radionuclides out of the atmosphere, say the researchers. The team used a computer simulation to show that the soil contamination in the areas they studied was caused largely by downpours on 15 March in Fukushima and on 21 March in the other four prefectures.

Kinoshita’s group calculated that the annual radiation dose would be about 40 millisievertsin Iitate and around 10 mSv in Naka-Dori, compared with the government limit of 20 mSv. Kinoshita says experts in radiation health maintain that there shouldn’t be health problems below about 100 mSv, but cautions that the long-term effects of low doses still aren't fully understood.

Timothy Mousseau, an ecologist at the University of South Carolina in Columbia, welcomes the studies, saying that the maps help to validate the many measurements of radiation made by members of the public, and will allow the government to focus future surveys on the most contaminated areas. “The best measurement is one that you take rather than one you predict,” he says. “But these models are good for setting the direction of further studies.”

There is still considerable uncertainty regarding how much radiation the plant released. A study3 led by one of Yasunari’s colleagues, Andreas Stohl of the Norwegian Institute for Air Research in Kjeller, estimated total caesium-137 emissions at 36 × 1015 Bq. This is much higher than the lower bound contained within the Yasunari report of 5.6 × 1015 Bq, and is also larger than the government’s most recent estimate, published in June, of 15 × 1015 Bq.

Gerald Kirchner, head of the division for radiation protection and the environment at Germany's Federal Office for Radiation Protection in Berlin, says that such differences are “absolutely what I would expect” given the limited data available.

“In the next 3–6 months we will have perhaps ten such assessments,” he says. When we combine them, he adds, we will have a "good picture" of the radioactive emissions.