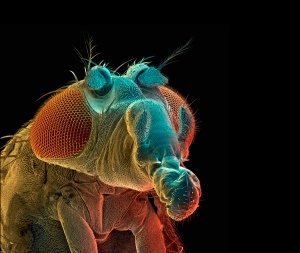 Fruitflies are common model organisms in genetics research, and now their genome has been mapped in 3D.

A decade ago, hot on the heels of whole-genome sequencing, the idea of three-dimensional genome mapping was developed1. Now, the highest-resolution 3D map of the fruitfly genome has been produced2, an important step towards understanding whether, and how, the structure of the genome affects its function.

Chromosomes and their genes are arranged in a specific way throughout the nucleus, and because the nucleotide sequence of a genome alone cannot explain the functions of its genes, researchers have started investigating how the spatial organization of genes might affect how they work.

“Conceptually, we’re entering a new era,” says study author Giacomo Cavalli, of the Institute of Human Genetics in Montpellier, France. “Forty years ago we looked at single genes, now we know we need to look at them in context — that’s the 3D folding of chromosomes.”

Such 3D organization could allow control of gene regulation in ways that are otherwise impossible, explains Job Dekker, whose laboratory at the University of Massachusetts Medical School in Worcester developed a key method3 for determining these structures, but who was not involved in the study. “The 3D folding of chromosomes adds an additional layer of genome control, allowing different loci far apart to associate in 3D space and regulate each other.”

The 3D map, published today in Cell, shows that the fly genome is divided into distinct physical domains. Actively expressed genes were found within the same physical domains, and genes that were repressed as a result of epigenetic marks (chemical groups added to the DNA and its associated proteins that don't change its coding sequence) were found in other distinct physical regions.

The team identified specific proteins associated with the domain boundaries, and hypothesized that they might stop interactions outside these domains. Although this seems true to an extent, Cavalli explains that it is “still not quite right”.

In fact, active and inactive domains tended to cluster together. But while active domains ‘reach out’ and interact with distant loci, even on different chromosomes, repressed domains were more likely to be confined to their own chromosomal regions.

Dekker describes this latest fly map as “exciting and important” because of the relatively small size of the genome, which allowed a high-resolution map to be generated. As Cavalli notes, the resolutions achieved in previous whole-genome 3D maps were limited by sequencing power because they looked at organisms with such large genomes. "Even in a genome with only 1,000 genes, you have potentially 1,000 connections, and so need 1 million sequences. In order to do statistical analysis you need even more — maybe tens of millions." In maps of human genomes, for example, it wasn't possible to sequence enough gene pairs to get to a decent resolution. Flies, with 13,600 genes, have around 9,000 fewer genes than humans, but Cavalli’s team still had to sequence 360 million DNA pairs for their study.

Applications for 3D mapping abound — from the analysis of different developmental stages in embryos to understanding the genetic changes that occur in disease. Cancerous cells, for example, are known to behave very differently from normal cells, experiencing changes in gene location as well as differences in gene expression.

Karen Meaburn, a cancer geneticist at the US National Institutes of Health’s National Cancer Institute (NCI) in Bethesda, Maryland, says that these 3D maps “are just what we need — good, strong foundations for us to start answering all these other questions”.

But cell biologist Tom Misteli at the NCI cautions that the ability to map genomes in 3D is still new. “There will be a flurry of 3D genome mapping papers, but there won’t be one map that will apply to all cells in a population; different cells will have variations of a common map.”

As more maps are produced, researchers hope they will identify some general principles of genome organization, and help to answer what Tom Sexton, another author on the Cell paper, describes as “the million-dollar question“: whether or not genome structure does indeed influence gene function.