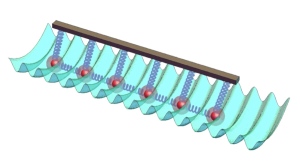 Atoms held in an electric field and laser light now allow the study of friction at the atomic scale.

Ions trapped in a vacuum have simulated the friction of surfaces down to the scale of single atoms, and in the process have demonstrated how some surfaces can slide past each other with almost no energy lost.

Engineers hope that harnessing such ‘superlubricity’ —  a counterintuitive phenomenon of almost frictionless sliding — could bring enormous savings by reducing friction between the moving parts of machines. In a typical car, for example, the amount of energy wasted through friction in the engine and transmission is larger than the energy lost to air drag and heating in the tyres.

In their study, Vladan Vuletić, a physicist at the Massachusetts Institute of Technology in Cambridge, and his colleagues mimicked one surface with a row of negatively charged ytterbium ions held in an electric field. They then simulated a second surface with light from two lasers. Interference patterns between the lasers formed a landscape of forces similar to the ridges on corrugated metal, and as the team slid the row of ions along it, pressure on the ions from the light simulated the interatomic forces that create friction between two solids, they report in Science1.

Researchers who study the physics of friction, called tribologists, had previously measured the effect at the microscopic level, even down to single atoms, by rubbing the tip of an atomic-force microscope onto a surface2. But these measurements have inevitable limitations, says Jacqueline Krim, a tribologist at North Carolina State University in Raleigh, because it is not possible to directly measure the forces that act on individual atoms and the energy that each dissipates. Krim calls the ion system “a beautiful, elegant set-up” and an important new tool for studying friction on the atomic scale.

Such an ion system was proposed in 2011 by Erio Tosatti, a theoretical physicist at the International School for Advanced Studies in Trieste, Italy, and his colleagues3. “The advantage is that experimenters can vary the parameters involved — such as the spacing of the atoms, the temperature, the speed — in ways that might not be feasible with the original solid materials,” he says. Tosatti had previously predicted that ions could be used to test theoretical models of superlubricity, which was first demonstrated conclusively in an experiment in 20044.

This is what Vuletić's team has now done. They first tried the experiment with a single ion, and then with ions that were spaced at intervals equal to the spacing of the ridges of light. This matched what one would see when two identical surfaces are rubbed together; it is analogous to rubbing identical combs together with all their teeth locked in step. But when the researchers changed the spacing of the ions, the mismatch caused the friction to drop by a factor of 10. The behaviour precisely mimicked the onset of superlubricity, and is similar to what one would see when rubbing together combs that have non-matching teeth.

“Instead of all the atoms slipping together, they can move one by one, like a caterpillar,” Vuletić says (see video).

And the good news, says Tosatti, is that superlubricity made its appearance with merely a handful of atoms, and does not require 100 or more, as his work had predicted.

The device built by Vuletić's team is a hybrid of two technologies — trapping ions with electric fields and neutral atoms with lasers — that are often used as ‘quantum simulators’ of phenomena such as superconductivity or as test beds for future quantum computers. And although in the latest work, Vuletić’s team focused on classical effects, Vuletić says that the set-up could also be used to investigate a possible role of quantum effects in friction. This, says Tosatti, is “a problem no one has yet taken up, either theoretically or experimentally”.