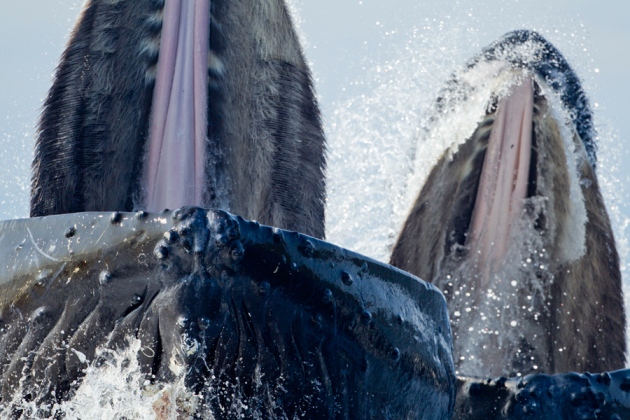 New fossil whale helps to clear up the murky origin of baleen whales, such as these humpbacks.

The discovery of a whale fossil dating back to 36.4 million years ago has filled in a gaping hole in the evolution of baleen whales, a group that includes humpbacks (Megaptera novaeangliae) and blue whales (Balaenoptera musculus). The creature, named Mystacodon selenensis, is the oldest baleen-whale relative yet found.

The skeleton displays traits that place it firmly as the first baleen-whale relative known to emerge after an ancient group of whale ancestors called basilosaurids split into two: one branch led to the toothed whales, which include sperm whales (Physeter macrocephalus) and dolphins, and the other to baleen whales. Researchers reported their findings on 11 May in Current Biology1.

“This is the fossil that we’ve been waiting for,” says Nick Pyenson, a palaeontologist at the Smithsonian National Museum of Natural History in Washington DC. Whale fossils from this time period can answer a lot of questions that researchers have about the origins of living whale lineages, he says. They include the appearance of the earliest baleen whale ancestors.

The first whales originated roughly 50 million years ago from land animals that crawled into the sea, gradually trading in their legs for flippers. “There are so many changes from their terrestrial ancestors,” says Olivier Lambert, a palaeontologist at the Museum of Natural Sciences in Brussels, and lead study author. “It’s a nice example for evolution at work.”

Before now, the oldest known baleen-whale fossil was 34 million years old. But molecular and physical analyses indicated that whales were older than that. Then in 2010, Lambert and his team found and began excavating the M. selenensis skeleton from the Pisco Basin on Peru's southern coast. Scientists estimate that the ancient creature was roughly 4 metres long — about the size of a large bottlenose dolphin (Tursiops truncatus).

To determine where M. selenensis fit in the whale family tree, the researchers compared characteristics such as the shape of its skull and pelvic bone to those of other fossil whales. The creature's flat snout resembles that of modern baleen whales. But its pelvic bone fit more with ancestral whales, complete with areas where the leg bones would typically slot in, says Lambert. “So, we think that this animal still had tiny legs protruding from the body.”

If you look at a basilosaurid, “you’ll see little chicken legs back there”, says Mark D. Uhen, a vertebrate palaeontologist at George Mason University in Fairfax, Virginia. Modern whales lack cavities for the hind limbs in their pelvic area.

Nice to eat you

M. selenensis also had teeth, unlike modern baleen whales, which strain food out of seawater using keratin plates (called baleen) that hang from the roof of the mouth. Lambert and his colleagues think that M. selenensis might have sucked up its prey from the ocean floor.

This wasn’t unusual, however, because baleen-whale ancestors around that time sported a wide variety of dental and feeding mechanisms. “There’s big toothed things, there’s little toothed things and there’s toothless things, all at once,” says Uhen. But by around 23 million years ago, all the whales in this group had baleen, and “all these toothy things go away”, he says.

Researchers still don’t know why baleen and filter-feeding won out over all other eating options in this particular lineage. But to answer that question, palaeontologists need to start taking a harder look at the specimens that they already have, says Pyenson.

Finding more ancient whale fossils will help, too — so Lambert and his colleagues plan to head back to Peru to search for other individuals of this species.

So far, most whale fossils have been found in the Northern Hemisphere. But with the emergence of M. selenensis and a variety of older fossils from the Southern Hemisphere, researchers are turning their eyes to the south.

“We thought we knew a lot about this time,” says Pyenson. But “we really need to look in more detail at the Southern Hemisphere of this age if we want to learn more about this time in whale evolutionary history.”