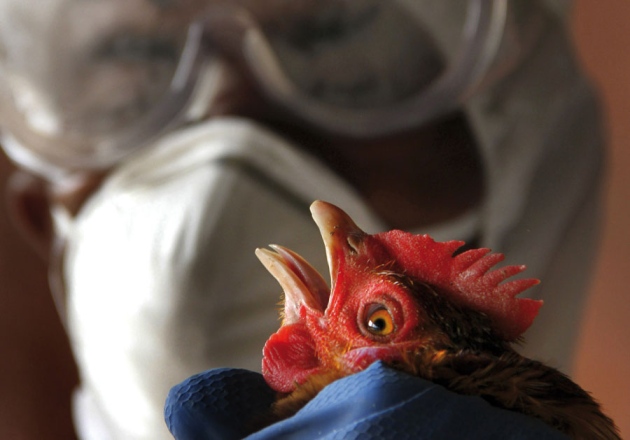 Upgrading the biosafety level for studies on mutant avian influenza could put a stranglehold on the work.

After weeks of debate, two controversial papers describing forms of the H5N1 avian influenza virus capable of transmitting between mammals should be published in full. That was the unexpected outcome of a meeting convened last week in Geneva, Switzerland, by the World Health Organization (WHO), which also promised to create a more rigorous oversight system for such research.

The decision goes against a recommendation from the US National Science Advisory Board for Biosecurity (NSABB), which the US government has adopted as its official position. In December 2011, the board said that experimental details of the two studies should be redacted from any publications, because of concerns that the information could be used in a bioterror attack. The board also feared that publishing the details would prompt more laboratories to work on the viruses, making an accidental release more likely.

The studies, which created forms of H5N1 that can spread between ferrets through airborne transmission, are likely to be published in a few months. The 22 experts at the meeting, mainly flu researchers, believe that the delay is needed to explain the benefits of the work to the public, and allay concerns about its safety. Meanwhile, a 60-day moratorium on similar research will be extended until a system is put in place to review levels of biosafety and biosecurity. To that end, the WHO intends to convene international discussions among regulators and other bodies in the next few months.

The two researchers at the centre of the controversy say that they are pleased with the outcome. “I was pleasantly surprised by the fact that there were unanimous decisions about most issues, and strong consensus on the others,” says Ron Fouchier, a flu virologist at Erasmus Medical Center in Rotterdam, the Netherlands, whose study has been accepted by the journal Science. Yoshihiro Kawaoka of the University of Wisconsin-Madison, lead researcher on the other study, adds that the meeting allowed him and Fouchier to explain their work, including the potential benefits for surveillance of emerging flu strains (Nature 481, 417–418; 2012) and for vaccine preparation (Nature 482, 142–143; 2012). “We presented why we did these experiments, what we did, what data we obtained, what these data contribute to public health and to the scientific field, and why we think the results should be shared,” says Kawaoka, whose paper has been accepted by Nature. He adds that data he and Fouchier presented on the evolution of H5N1 in the wild clarified the threat from the virus, although he would not be drawn on the details, citing confidentiality.

Microbiologist Paul Keim, who chairs the NSABB and attended the meeting, did not respond to Nature’s request for an interview, but is reportedly “disappointed” by the recommendation to publish the papers.

Nature and Science last year agreed in principle to redact the papers, on the condition that the US government would develop a mechanism to disseminate the full papers to researchers and health officials on a need-to-know basis. But meeting participants concluded that this was impractical, and that the potential public-health benefits of the work outweighed any risk of publishing the papers in full.

Many flu researchers have already seen the papers, so there was little to be gained by restricting their dissemination, says Richard Ebright, a molecular biologist and biodefence expert at Rutgers University in Piscataway, New Jersey. It is much more urgent, he says, to put in place strict biosafety, biosecurity and oversight provisions for such research.

David Fidler, an expert in international and national security law at Indiana University in Bloomington, points out that the meeting hasn’t actually broken the publication deadlock, because Keim and representatives of the US government still do not agree with publishing the studies in full. “Most of the meeting’s participants appear to have rejected the US position,” says Fidler, “but [have] agreed to the extended moratorium and publication delay in the hope that the US government will change its mind.”

Participants agreed that the mutant viruses should remain in their two containment facilities — rated at ‘BSL-3 enhanced’, the second-highest level of biosafety — and that both should be reviewed before any work restarts. Didier Houssin, president of the French Evaluation Agency for Research and Higher Education, says that the biosafety review of the work must consider whether studies of this kind should be conducted only in labs with the highest biosafety rating of BSL-4, a restriction imposed this month by Canada. Houssin, who attended the meeting, notes that imposing such a restriction globally would curtail similar work because there are just a few dozen BSL-4 labs worldwide. The safety level of BSL-3 labs is very variable, he says, and so any facilities working on such viruses would need to be rigorously assessed.

Fidler and other experts note that the meeting did not address the overall risks and benefits of the work, or how similar research might be overseen in future. Keiji Fukuda, WHO Assistant Director-General for Health Security and Environment, explains that later meetings will deal with these topics and will have wider participation.

Meanwhile, the meeting agreed that it was “critical” for the WHO to form a communications plan over the next few months to increase public awareness and understanding of the importance of the flu work, and to alleviate public anxieties. But Peter Sandman, a risk-communications consultant in Princeton, New Jersey, advises against any attempt by the WHO to “educate” the public out of its concerns. As a strategy, he says, it “is thoroughly discredited, because it doesn’t work”.