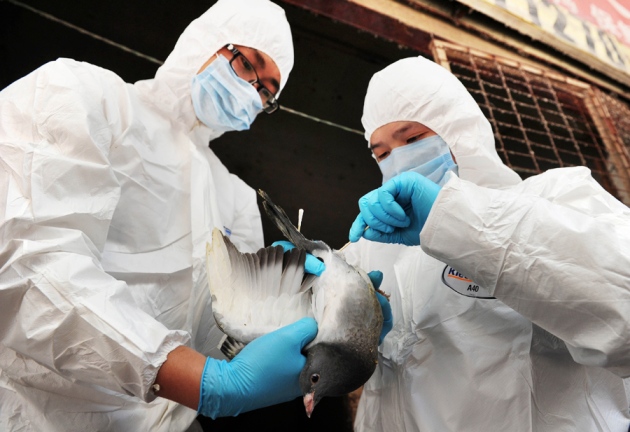 Health workers swab a pigeon in a market in Changsha, China.

No one knows whether the H7N9 avian influenza that has infected more than 560 people in China and killed 204 might yet evolve to spread easily among people. But the largest-ever genomic survey of the virus in poultry now provides a more detailed picture of its evolution and spread.

H7N9 was first detected in and around Shanghai at the end of March 2013, and cases soared throughout April that year. The initial outbreak was swiftly brought under control after live-bird markets were identified as the main route of spread to humans, and were temporarily closed. Hopes that the virus might have fizzled out were dashed, however, when H7N9 returned the following winter, spread south, and caused a large second wave of human infections. Confirming the seasonal pattern, there was a lull in new cases in the summer of 2014, but infections rose again late last year in a third wave that is still going on (see ‘Seasonal spread’). 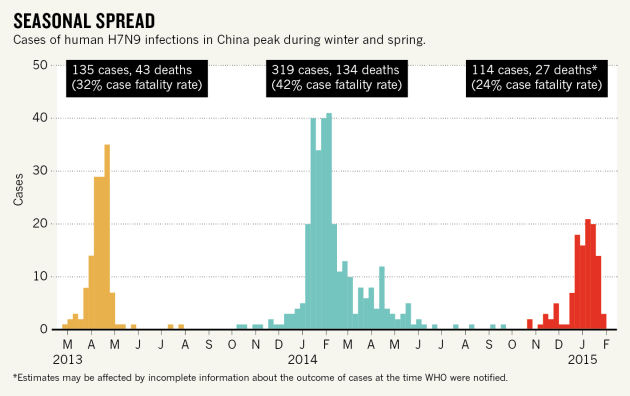 In a paper published on Nature’s website this week (T. T.-Y. Lam et al. Nature http://dx.doi.org/10.1038/nature14348; 2015), an inter­national team of researchers describes how it tracked the virus from October 2013 to July 2014 by taking swabs from poultry at live-bird markets in 15 cities over 5 provinces in eastern China. The group detected the virus in markets in seven cities and in 3% of samples on average.

The team then sequenced the genomes of 438 viral isolates and found that as the virus spread south, it evolved into three main branches, with multiple sub-branches.

Such diversification is expected, but tracking it can help to identify the main trade routes and markets that fuel a virus’s spread. “The extent of viral transmission among chickens was largely unclear until our paper showed that the virus had diverged into regional lineages,” says Yi Guan, a co-author of the paper and a virologist at the State Key Laboratory of Emerging Infectious Diseases in Shenzhen, China. “Eastern China remains as a reservoir and ‘distribution centre’ for this virus,” he says.

As flu viruses evolve and diversify in birds, genetic changes can alter their infectivity, virulence or ability to spread among humans, notes Guan. Human infections also provide viruses with opportunities to better adapt to their hosts.

Genetic surveillance is therefore important in tracking mutations, and in testing whether flu strains show any enhanced capacity to spread between mammals such as ferrets and other animal models. From the outset of the outbreak, H7N9 carried mutations that allow it to spread from birds to humans more easily than avian H5N1 flu, which has infected 784 people in 16 countries and killed 429 of them since it appeared in 2003. Guan’s team reported no further acquisition by H7N9 of significant known mutations, however.

The wave of H7N9 infections that is currently under way probably has patterns of spread different from those of the second wave, which the team tracked. But before the latest study's update, just 8 genome sequences from birds collected in 2014 had been deposited in the GenBank repository, and just 258 sequences from those collected in 2013. That is not enough for geographical mapping of the virus over time, says Marius Gilbert, an avian-flu epidemiologist and ecologist at the French-speaking Free University of Brussels.

The Nature news team has analysed the number of sequenced genomes from all subtypes of avian influenza submitted to GenBank over the past 15 years (before the latest paper's sequences were added). The results show that overall genetic surveillance worldwide remains patchy and less than prompt. Most viruses are sequenced months or years after they were collected (see ‘Viral lag’). 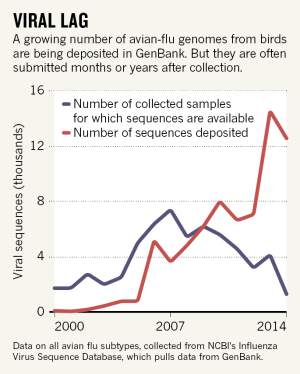 Guan agrees that timely monitoring is important. But surveillance and viral sequencing are costly and time-consuming — and isolating and sequencing viruses are all the more so, he points out. This means that surveillance of flu viruses in animal populations is rarely routine, usually  done only in response to outbreaks. For H7N9, sequencing the virus also requires access to a biosafety-level-3 lab. Given the complications, Guan thinks that the number of recent H7N9 sequences deposited in GenBank is not grossly low.

Adding to the time lag, public authorities and researchers who sequence flu strains sometimes make the data public only when, or if, they publish — so sequences can languish. The authors of the latest study have sent sequences to GenBank and had already shared the data with the World Health Organization (WHO) and other bodies.

The threat from H7N9 is unlikely to go away any time soon. The virus is now endemic and entrenched in poultry populations across swathes of China, making it likely that people will continue to be infected sporadically. The researchers warn that it seems only “a matter of time before poultry movement spreads this virus beyond China by cross-border trade, as happened previously with H5N1 and H9N2 influenza viruses.

Guan and his co-authors say that given that H7N9 can infect humans, it “should be considered as a major candidate to emerge as a pandemic strain”. But predicting pandemic potential is an embryonic science. Last year, a prominent international group of researchers argued that there is little evidence that flu viruses that cause sporadic human infections are a greater pandemic threat than viruses that have not yet infected humans (C. A. Russell et al. eLife 3, e03883; 2014). But Guan says that given the vast number of flu viruses, it is necessary to prioritize targets for control and vaccine development — and that H7N9 should be high on that list.

There is no shortage of potential threats. The WHO last month warned that the current diversity and geographical range of novel animal influenza viruses is “unprecedented” — with an alphabet soup of new strains, including H10N8, H5N2, H5N3, H5N6 and H5N8, popping up in various parts of the world.

It is unclear to what extent this is a real increase or the result of improved surveillance. But the WHO says there is also evidence that different subtypes are currently swapping genes more easily and rapidly to form novel strains. It is “practically impossible” to assess whether this increased diversity represents a heightened threat of a pandemic virus emerging, says Guan.