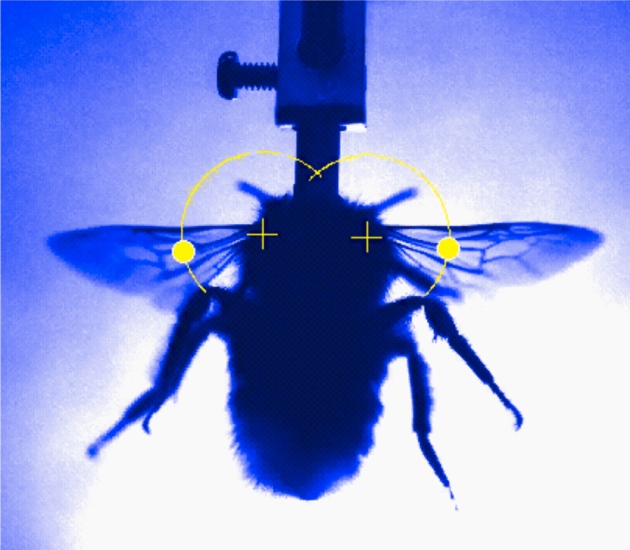 The wing-beats of a bumblebee can be studied in detail using X-ray scattering.

To stay aloft, insects have to beat their wings very fast — up to 500 times a second in the case of mosquitoes. Exactly how they do this has long been debated. By capturing the molecular details of wing beats in live bumblebees, a study now argues that insect flight muscles do not work through a specialized mechanism but exploit properties shared with vertebrate muscles1.

“It has long been known that many insects don’t move their flight muscles in the way vertebrates do,” says Hiroyuki Iwamoto, a biophysicist who conducted the work with his colleague Naoto Yagi at the Japan Synchrotron Radiation Research Institute (or SPring-8) in Hyogo. “The big question is whether the difference is unique to insect flight muscles or exploits a property common to all muscle proteins.”

Human muscles contract when they receive a signal from the motor nerves. This signal causes calcium ions to be released from membranes in the muscle. The calcium ions are captured by proteins called troponins on fibrous proteins called actin, causing the actin filaments to rotate and expose sites where the ‘head’ of myosin, a motor protein, can bind.

After the head binds to actin, the myosin molecule kinks, pulling on the actin filament to cause muscle to contract and burning energy in the process. But the mechanism is too costly in energy and requires too rapid a pumping of calcium to be repeated hundreds of times a second for insect flight.

Instead, “once insect flight muscles are activated by nerves, they oscillate spontaneously,” says Yale Goldman, a muscle physiologist at the University of Pennsylvania in Philadelphia.

These self-sustained oscillations are induced by "stretch activation", in which the force generated by each of two out-of-phase, antagonistic flight muscles gets stronger as they are extended, pulling the wing back.

Stretch activation “appears to occur in most muscles that beat rhythmically, which includes human cardiac muscle”, says Kenneth Taylor, a molecular biophysicist at Florida State University in Tallahassee. But whereas heartbeats are governed by calcium signals, wing beats are not.

“Because repeated calcium release and uptake is not necessary, there is no upper limit to the wing-beat frequency,” says Iwamoto.

But, says Goldman, “what triggers it isn’t known. This has been a puzzle in the field.”

One possible answer, proposed in 1979, is that stretch activation arises because, as the muscle becomes more extended, more myosin heads are able to bind to actin2. But more recently it has been suggested that insect flight muscle might have a special adaptation that vertebrate muscle does not: a form of troponin that doesn’t need activation by calcium ions3.

A bumblebee's wing beats, captured at 5,000 frames per second.

In the new study, Iwamoto and Yagi measured changes in the arrangement of the molecular motor components of muscle while insects were in flight — or trying to fly, having been glued in place at the end of a narrow aluminium tube (see ‘On the wing’).

The researchers positioned the insects in the path of an X-ray beam. The pattern of bright spots formed when X-rays are scattered by the muscles contains information about the reorganization of their protein molecules. Iwamoto and Yagi followed these changes by collecting the X-ray data at high speed, synchronized to video footage of the bees at 5,000 frames per second.

The researchers concluded that in insect flight muscle, myosin heads rotate when muscle stretches, and this enables them to bind more strongly. In other words, stretch activation is a fundamental consequence of the interaction between actin and myosin in this kind of muscle, just as it is in some vertebrate muscle. The rotation of the myosin heads shows up in the X-ray data as an increase in the strength of one of the X-ray spots.

While X-ray scattering from live insects has been reported before4, the researchers have been able to monitor it much faster than previously — at 40 frames per wing beat. “The paper is very impressive from the technical standpoint,” Goldman says.

The findings “really help clarify the process of force generation in insect flight muscle,” says Taylor. “If you believe that myosin and actin function virtually the same way in all muscles, then it’s a big step in explaining muscle contraction in general,” he adds.

But Goldman warns, “this will be somewhat controversial, given the evidence that a special troponin might be the trigger.”