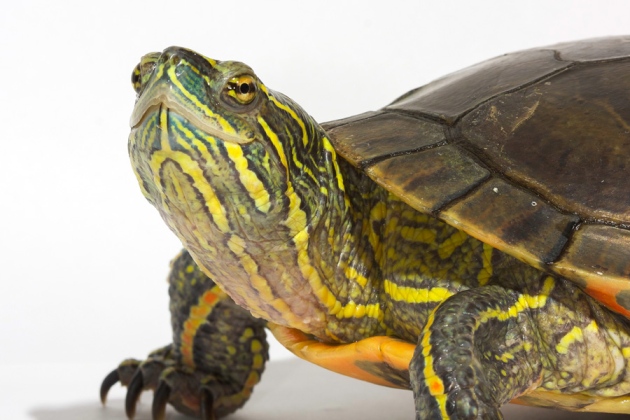 Scanning the genome of the painted turtle, Chrysemys picta bellii, revealed microRNAs that were reported missing in earlier studies

Tiny molecules that seemed to provide a powerful way to construct the tree of life may not have such a strong capability after all. A team of scientists has exposed1 flaws in a previously celebrated method that uses molecules called microRNAs to deduce evolutionary relationships between animals.

As well as casting doubt over some specific results published in the past few years — for example, that turtles are more closely related to lizards than to birds and alligators2 — the latest findings pour cold water on what seemed like a hot approach to solving some big mysteries in evolutionary biology.

As their name suggests, microRNAs are much shorter than the long RNA strands that are translated into proteins within cells. MicroRNAs instead regulate the expression of genes, an essential duty that means that the genes that code for microRNAs are expected to remain mostly unchanged from generation to generation.

This presumed conservation made microRNAs seem like ideal signatures for evolutionary relationships. Subsequent observations revealed that some clearly related animals share specific microRNAs — and that these molecules are missing in animals that they are not as closely connected to. This led palaeobiologist Kevin Peterson at Dartmouth College in Hanover, New Hampshire to pioneer a method of building evolutionary trees according the presence or absence of specific microRNAs.

Over the past few years, the method has gained traction — and studies that depended on it have repeatedly attracted attention from news outlets, including Nature's news team.

One study2, carried out by Peterson and his colleagues, put turtles on the same evolutionary branch as lizards, rather than close to birds, crocodiles and alligators, as previous analyses had done.

The suggestion surprised researchers, including Bob Thomson, a young evolutionary biologist at the University of Hawaii at Manoa who was also analysing turtle evolution. His own evolutionary trees, built by comparing genetic sequences, offered a different outcome. "At the time, I had the impression that microRNAs were these silver bullets to solve sexy problems, so my thought was that something was wrong with my data," he recalls.

Thomson and his colleagues re-ran the same analysis that Peterson's team had used. This produced the same evolutionary tree — but Thomson's team noticed something strange. The relationships among the animals suggested that a relatively large number of microRNAs had been lost over time. To Thomson, this result seemed to violate one of the main justifications for using microRNAs to build evolutionary trees in the first place: that it is almost always conserved across generations.

His team re-analysed four other microRNA studies on the trees that included flatworms3, vertebrates4, earthworms5 and some unusual parasites6. Similarly, the researchers noted many more microRNA losses than expected. "The way microRNAs were being analysed probably didn't reflect the way they evolve," says Thomson, whose team reports the latest analysis today in Proceedings of the National Academy of Sciences1.

Thomson and his co-authors also applied an alternative method of analysing trees, which accommodated nuances in microRNA evolution, instead of using a method that assumes microRNA conservation through the generations. Three of the five resulting trees, including the reptile tree, more closely matched those produced by other methods.

It is not clear whether Peterson's groups did not notice the loss of the microRNAs over evolutionary time, or just didn't report it, says Thomson.

Thomson’s team also found other problems with the earlier studies, which had to do with the researchers' raw data. Many of the microRNAs that had been presumed absent, were in fact present in the animals, but missed by the original researchers. For example, in the case of the turtle study, Peterson’s team had searched for microRNAs in RNA extracted from cells, rather than by sifting through the turtle genome — which was not available when they did the study. The discrepancy likely results from the fact that some pieces of RNA are only expressed at particular moments in an animal’s lifetime, whereas genes in the genome are steady.

Peterson could not be reached by Nature for comment, but Erik Sperling, a palaeobiologist at Yale University in New Haven, Connecticut, who was Peterson's co-author on some of the microRNA analyses2, 5, agrees with Thomson's conclusion that microRNAs cannot alone unveil species relationships. "MicroRNAs are not the panacea we perhaps originally hoped,” he says.

Sperling does stand by the idea that microRNAs are generally conserved, and he says that they can be informative if better methods are used to find them, such as sifting through genomes. Plus, they should be analysed along with various genes, he says. Peterson and his colleagues recently published a new turtle tree of life that is based on microRNAs, among other information7. The study refutes the earlier, controversial arrangement that put turtles on the same branch as lizards. "There are just some growing pains in the field, and this paper has pointed them out," says Sperling.

For Ken Halanych, an evolutionary biologist at Auburn University in Alabama, today's paper provides a critical analysis of a method that he has long doubted. Why did microRNAs get so much attention? "Because we are hopeful," he says. A simple tool to decode how animals have evolved over hundreds of millions of years would certainly be nice — but it is looking unlikely that one exists.