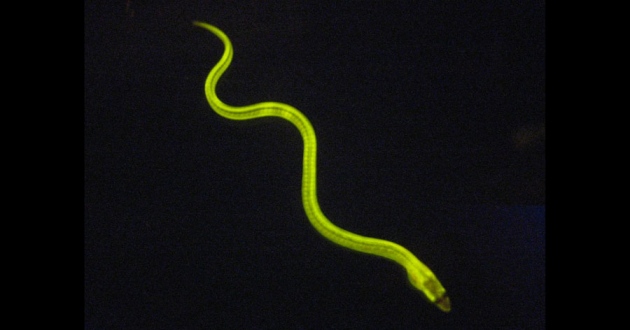 When blue light is shone on it, this eel glows green — and the molecule that lets it do the trick is unlike any other found in living organisms.

The Japanese freshwater eel (Anguilla japonica) has more to offer biologists than a tasty sushi snack. Its muscle fibres produce the first fluorescent protein identified in a vertebrate, researchers report in Cell1.

Fluorescent proteins are as standard a tool for cell biologists as wrenches are for mechanics. They do not produce light themselves, but glow when illuminated. The 2008 Nobel Prize in Chemistry was awarded for the discovery and development of such molecules, which are used to tag proteins or to track how genes are expressed. The molecules have been engineered to produce light in a variety of hues and brightnesses, but those discovered until now in nature all came from non-vertebrates, mainly microbes, jellyfish, and corals.

The first clues to the eel protein’s existence came in 2009 when Seiichi Hayashi and Yoshifumi Toda, food chemists studying nutrients in eel at Kagoshima University in Japan, were tracking lipid transport into oily eel tissue and reported that eel muscle fluoresced naturally2 glowing green when a blue light is shone on it. They then isolated a few fragments of the protein responsible. This intrigued Atsushi Miyawaki, a molecular biologist at the RIKEN Brain Science Institute in Wako, Japan, who has identified and engineered new properties into fluorescent proteins from jellyfish and corals.

In the latest work, Miyawaki and his colleagues have identified the gene that codes for the molecule, and have named the new protein UnaG, after unagi, the Japanese word for freshwater eel that is familiar to sushi lovers worldwide. 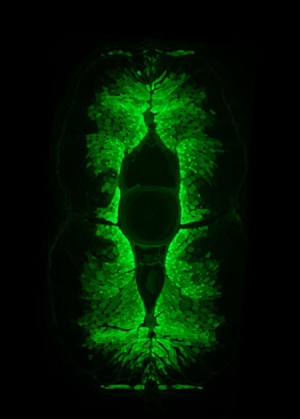 “I don't think anyone would have thought that eels would have such a bright fluorescent protein,” says Robert Campbell, a protein engineer at the University of Alberta in Edmonton, Canada. And UnaG is in a class of its own, he says. “It's totally different” from other fluorescent proteins. “There's not anything you can point to that's the same.”

For example, instead of producing light with a 'chromophore' that is part of the protein sequence, as the classical Green Fluorescent Protein (GFP) does, UnaG fluoresces when it binds a naturally occurring small molecule called bilirubin, a breakdown product of haemoglobin used in hospital tests for decades to assess liver function and diagnose diseases such as jaundice.

UnaG is also unusual because, unlike GFP, it fluoresces brightly even when oxygen levels in cells are low. This could be useful for visualizing anaerobic areas inside cancerous tumours, says Campbell.

Aglow under the sea

In 2007, a different group of researchers found a fluorescent protein in the lancelet, a tiny somewhat eel-like marine creature closely related to vertebrates. But that protein is in the same class as those found in corals and jellyfish3.

Japanese freshwater eels mature in rivers and travel far out to sea to spawn, and UnaG may help them with long-distance migrations by playing a role in muscle function. European and American freshwater eels (Anguilla anguilla and Anguilla rostrata) also migrate long distances, and Miyawaki and his colleagues found that these eels, too, make UnaG. Young Japanese eels, which migrate from sea to rivers, produce the protein in abundance, so that they glow beautifully when illuminated with a blue light, says Miyawaki.

The team showed that UnaG could be used to measure bilirubin in human serum and they suggest that this approach could lead to simpler, more sensitive tests requiring smaller blood samples, says Miyawaki.

The next steps, says Miyawaki, include inserting the UnaG gene into laboratory mice and checking that they develop normally. UnaG is a member of a family of fatty-acid-binding proteins that are found in humans and other animals, says Miyawaki, but none of the others he has tested are fluorescent.