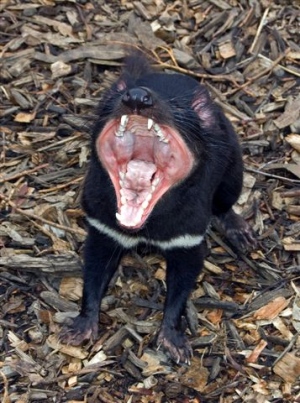 Save the Tasmanian Devil Program

Tasmanian devils are threatened by an infectious cancer that causes facial tumours.

Tumour cells from a Tasmanian devil that may have died two decades ago now threaten to wipe out the entire species. Genome sequences from the infectious tumour are published today in the journal Cell1, offering clues about how the cancer has spread to devils across the Australian island of Tasmania.

Scientists hope that the information will eventually help to rescue dwindling wild populations of Tasmanian devils (Sarcophilus harrisii) by predicting the how the disease will spread and by identifying genes that could be targeted by vaccines or drugs.

The first cases of devil facial tumour disease (DFTD) were detected in the mid-1990s, when people noticed the disfigured faces of devils in northeast Tasmania. These tumour cells pass from devil to devil when the aggressive marsupials mate and fight for food.

Once seeded, the cancer cells divide swiftly to form large malignant growths, and most infected devils die from starvation or metastases to vital organs within months. DFTD has marched steadily across Tasmania, and now a pocket in the northwest part of the island is the only place home to whole populations of uninfected devils. In the hardest-hit areas, more than half of devils are infected and many die as they hit their reproductive prime.

The power of one

Elizabeth Murchison, a geneticist at the Wellcome Trust Sanger Institute near Cambridge, UK, who led the study, says that every case of DFTD originated with a single female devil. “She died decades ago, yet her DNA is still living on in the cells that are spreading around in these tumours. I call her the immortal devil,” Murchison says. 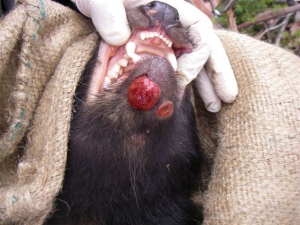 Save the Tasmanian Devil Program

A devil with facial tumours.

To identify mutations that might be driving the tumour, the researchers compiled a list of tens of thousands of mutations found only in the tumour cells. Most of these mutations were present in the normal genome of the first devil to succumb to tumour, but as few as 1,000 are unique to the tumour and some underlie its insidiousness, Murchison says.

In both tumours, Murchison and her team found identical mutations in genes linked to cancer in humans called RET and FANCD2. Another gene thought to be involved in immune response is completely missing from both tumours, offering a potential clue as to why the foreign cells go undetected in a new host.

The devil tumour is also evolving — each tumour contains thousands of mutations not found in the other. Katherine Belov, an immunologist at the University of Sydney, Australia, says that the next step will be to determine whether these mutations strengthen or weaken the tumour. For instance, in a recently infected population in northwest Tasmania, fewer animals have developed tumours and those that do take longer to die3.

Murchison plans to sequence the genomes of more devils and tumours to get a better handle on the mutations responsible for the disease's spread. With luck, the tumours will be caused by mutations that can be treated by the growing number of targeted drugs being developed to treat human cancers, she says. But it is more likely that genome sequencing could identify genes that are expressed by the tumour but not by healthy cells. A vaccine composed of the products of such genes could spur the devil’s immune system to go after the tumour.

Belov hopes to learn how the devil tumour slips under the immune system’s radar. One of the genes found missing from the tumour resembles genes that control T cells, which do not ordinarily enter the malignancies. “There is still so much that needs to be done to understand this dreadful disease. But the tumour genome will hopefully help us to get there faster,” she says.