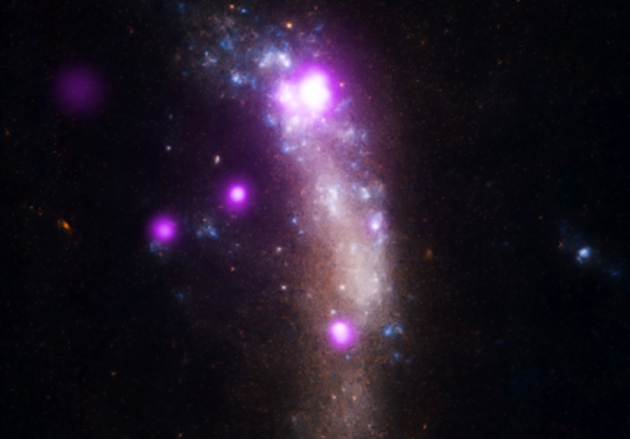 The supernova SN 2010jl (large white spot near top) produced dust much larger than usually found in the Milky Way.

Astronomers watching a supernova may have found out where the dust that makes up much of the Universe came from.

Cosmic dust is crucial to the birth of stars and rocky planets, and provides the elemental ingredients for life. But its origin is obscure. Many astrophysicists think that dust is forged during the explosive supernova deaths of massive, short-lived stars, yet some observations of supernovas near our galaxy indicate that they produce too little material to account for the copious amounts of dust present in the young Universe.

In Nature today1, astronomers lift the veil on the mystery, documenting the formation of dust in a supernova from just a few weeks after the explosion to almost 2.5 years after it. The study reveals the formation of oversized dust grains that were able to withstand the shocks of the exploding star. It also shows that dust production was slow at first, but later sped up.

Most previous studies looked at each supernova for short periods of time, so “they did not tell us the full story of how much dust supernovas produce”, says co-author Christa Gall, an astrophysicist at Aarhus University in Denmark. She and her colleagues monitored the supernova SN 2010jl, first spotted in a nearby galaxy in 2010.

Using a spectrograph on the Very Large Telescope on Cerro Paranal in Chile, the team measured the amount of visible light absorbed by the dust particles and the infrared radiation that the particles themselves emitted.

The team's data are particularly compelling because they provide this simultaneous coverage at a range of wavelengths from weeks to years after the explosion, says astronomer Rubina Kotak of Queen’s University Belfast, UK. This provides information about both the size and the composition of the grains.

Such coverage “is difficult to obtain for all but the nearest and brightest supernova events”, she says.

The team concluded that the dust present between 40 and 240 days after the explosion must have been made of material expelled before the star went supernova, because the only other possibility would be the debris hurled into interstellar space by the supernova itself. And this is too hot to condense into dust particles so soon after the explosion, Gall notes. As the expanding shock wave from the supernova swept by in this period after the explosion, it compressed the previously ejected material into a cold, dense shell — the perfect environment for dust to coalesce and grow.

To their surprise, the astronomers found that the dust particles were enormous by Milky Way standards, measuring 1 to 4.2 micrometres across — at least four times the typical width of dust particles found between star systems in our home Galaxy. It is harder to form large dust particles, notes Gall, but their size makes them resistant to destruction by shocks associated with the supernova slamming into interstellar material, and probably accounts for their longevity. Large interstellar dust grains have previously been found in our Solar System.

During early observations, the amount of dust around SN 2010jl was relatively small, equivalent to less than one-ten-thousandth the mass of the Sun. But between 500 and 868 days after the explosion, dust formation accelerated and the dust mass increased more than 10-fold.

The revved-up rate marks a transition to a second phase in supernova dust production, says Gall. Once carbon-rich material and other debris generated during the supernova has cooled sufficiently, it begins to coalesce into dust, speeding up production. At day 868, the last time Gall’s team observed the supernova, the amount of dust had increased to 2.5 thousandths of the Sun’s mass, or 830 Earth masses.

If the increased dust production continues, in 20 years SN 2010jl will have produced the equivalent of half the Sun’s mass in dust particles, similar to the amount observed in the widely observed supernova SN 1987A. If numerous supernovae early in the Universe produced dust at a similar rate, it could indeed account for the dust observed in the young cosmos, says Gall.

Due to an editing error, an earlier version of this article incorrectly stated that at the late stages the amount of dust was "0.04 of the Sun’s mass". The correct number is 2.5 thousandths (0.0025) of the Sun's mass.