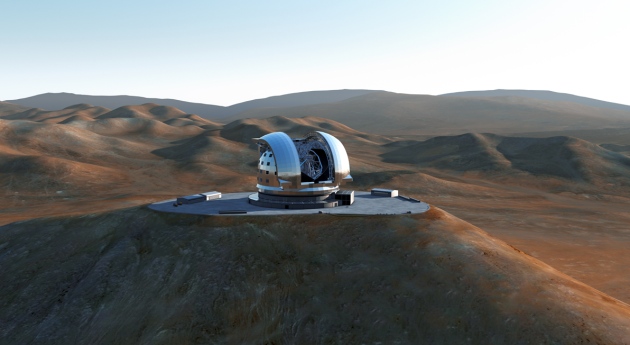 The construction of the European Extremely Large Telescope (artist’s impression) in Chile will rely on funds from Brazil.

The European Organization for Nuclear Research (CERN) draws particle physicists from around the world to its headquarters near Geneva, Switzerland, but when they line up for lunch the meals are traditionally French. Duck-leg confit and sliced beef liver are among the delicacies on this week’s cafeteria menu.

But falafel may soon become a staple. Last month, Israel took its seat on CERN’s council as an associate member — the first non-European country to do so in the organization’s 50-year history. Other nations outside the European Union, including Serbia and Turkey, are expected to follow soon. For Rolf-Dieter Heuer, the lab’s director-general, the goal is to “redefine the ‘E’ in CERN from ‘Europe’ to ‘everywhere’”. CERN is not alone in its internationalist overtures: facilities across the continent are hoisting the flags of new, non-European members.

Part of the motivation for wooing new partners is a genuine desire to broaden scientific collaborations, but it is no coincidence that the expansion coincides with the worst financial crisis in a generation. Many European nations are slashing their science spending, and international labs are feeling the pressure to find savings and keep costs down1. Greece, facing a deepening crisis, has sought to reduce its fees to CERN and the European Space Agency (ESA), which currently total about €30 million (US$39 million). And states such as Portugal and Spain, which have made particularly deep cuts to their science budgets2, are almost certain to try to renegotiate their international obligations. Meanwhile, fast-developing countries outside Europe have money to spend on science.

Economics has always played a part in the evolution of Europe’s multinational research facilities. Many were set up as international treaty organizations in the 1950s and 1960s as part of an effort to strengthen economic, social and industrial ties across Europe. They have gradually expanded their membership, but have traditionally drawn a line at the edge of the continent. Although large numbers of US and Japanese scientists work at CERN, for example, those nations are designated as observers on the lab’s governing council.

That is changing fast. Last year, India joined the Institute Laue-Langevin (ILL) in Grenoble, France, which produces beams of neutrons to probe the structures of materials and biochemicals. Together with Russia, India has also joined the €1.4-billion Facility for Antiproton and Ion Research (FAIR) now under construction in Darmstadt, Germany. And later this year, Brazil is expected to ratify its membership in the European Southern Observatory (ESO), based in Garching, Germany3.

The financial downturn has certainly been a factor in the decision to bring India in as a full member of the ILL, says Andrew Harrison, the facility’s director. The ILL’s nuclear reactor delivers neutron beams to dozens of instruments that have to be regularly upgraded to keep the facility globally competitive. With each upgrade costing between €3 million and €6 million, staying on the cutting edge eats up a significant chunk of the facility’s €88-million annual operating budget. India will bring hardware and an extra €1 million or so per year in cash.

The desire to fund entirely new facilities provides an even stronger motivation for inviting outside partners. Beatrix Vierkorn-Rudolph, who oversees large research facilities at the German Federal Ministry of Education and Research in Bonn, says that without support from Russia and India, FAIR could not have gone ahead. The facility’s Russian-born director, Boris Sharkov, adds that FAIR is in negotiations with China, Brazil and Saudi Arabia about possible collaborations, which could help to fund new particle detectors.

Brazil’s admission into ESO will be crucial in paying for that organization’s next-generation telescope, the 40-metre European Extremely Large Telescope (E-ELT). Around one-third of the €1.1-billion construction budget will come from Brazil’s membership dues, says Tim de Zeeuw, director-general of ESO.

“If you get the best players, then you develop the best facilities.”

The new members get plenty in return, benefiting from the prestige associated with international collaborations and the training offered to their scientists. “ESO facilities are the top of the line,” says Sergio Machado Rezende, a physicist at the Federal University of Pernambuco in Recife, Brazil, and the country’s science minister from 2005 to 2010. ESO’s best tele­scopes are located in nearby Chile, which made joining the organization even more attractive, he says. Brazil’s astronomy community is currently made up of only about 200 researchers, but Rezende says that involvement in ESO will help the community to grow and gain strength. Brazil’s robust economy means that the nation will probably also consider involvement in organizations such as CERN, he says.

India’s membership of FAIR should provide benefits for the country’s technology firms, says Subhasis Chattopadhyay, a scientific officer at the Variable Energy Cyclotron Centre in Kolkata. The companies will supply power converters and magnets for the facility, and so gain expertise in constructing these hi-tech instruments. “Our goal was to get Indian industry building many new things,” says Chattopadhyay, adding that India, too, has its eye on CERN.

Not every organization is looking to expand beyond Europe. “For the time being, there are really zero discussions,” says Frederic Nordlund, acting head of international relations at ESA in Paris. His agency works closely with many nations, including Russia and India, but most want to maintain domestic expertise in space technologies, in part for strategic reasons. ESA has a long-standing partnership with Canada, but the agency’s current plans for expansion involve only new European Union member states.

The European Molecular Biology Laboratory (EMBL) in Heidelberg, Germany, stands apart for different reasons. “EMBL isn’t an organization that grows by building mega-projects,” says Iain Mattaj, director-general of the organization. As a result, it has no plans to open itself formally to outside membership — although it did allow Australia to join as an associate member in 2008.

Those that are expanding recognize that the move comes with risks. Some fear that a growth in international membership could erode the quality of European science or make it more difficult to govern. But Harrison says that European nations already on the ILL council are careful to ensure that any new members have a strong scientific community ready to use the facility. “We would not be interested in a member country that is rich but did not have the kind of user base that we could work with,” he says.

Things could get complicated if Europe’s centralizing instincts were to lead it to consolidate facilities — merging ESA and ESO, for example, or combining all of Europe’s particle-physics facilities. Although such mergers are not likely in the short term, the presence of many non-European partners would hamper them in the future, says Carlo Rizzuto, chairman of both the board of the Elettra Laboratory near Trieste, Italy, and the European Association of National Research Facilities. But ultimately, Rizzuto thinks, more international members will only strengthen Europe’s facilities, and its science. “If you get the best players, then you develop the best facilities,” he says.

Heuer hopes that the CERN council’s membership will grow from 20 to around 26 in the next 5–6 years. At the same time, he stresses that the lab must maintain its European character of careful deliberation and consensus-building, which is one reason that new partners must first join as associate members. Heuer predicts that CERN will adapt smoothly, given that it already hosts many scientists from outside Europe. As he points out, the lab’s cuisine has already begun to diversify: “The cafeteria also sells sushi, by the way.”