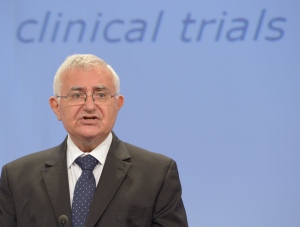 John Dalli, the European health commissioner, has proposed simplifying the rules on how clinical trials are conducted in Europe.

Just over a decade since the European Commission brought in its controversial Clinical Trials Directive, the commission is again setting out to shake up how medical research is regulated across the region.

Today, the commission formally adopted proposals for new rules that would replace the current directive and, the commission hopes, arrest the decline in European medical research.

Among the reforms outlined by the European Union (EU) health commissioner, John Dalli, are a centralized application procedure for trials run in more than one country, and plans for Europe to inspect the regulation of trials in other countries, such as India and China.

Many medical scientists criticise the directive for being excessively bureaucratic, and think that clinical research has moved to non-European countries because some nations are less strict in their oversight of trials. For example, in 2007 there were more than 5,000 applications to conduct trials in the EU — but by 2011, that number had plummeted to 3,800.

The proposals must now navigate Europe’s Parliament and Council of Ministers before they can become law. The changes “aim at restoring Europe’s reputation” as an attractive place to conduct medical research, said Dalli.

According to the commission, the extra red tape introduced by the current directive has doubled both the number of staff required to deal with trial authorizations and the costs of administration. Insurance fees have risen by a staggering 800% for industry sponsors of trials since the implementation of the directive in 2001.

Markus Hartmann, an independent expert and regulatory-affairs consultant based in Trier, Germany, published an impact assessment of the 2001 directive earlier this year. He showed that it has not harmonized clinical-trial rules in European countries, and that the red tape has actually reduced the number of clinical trials in Germany and the United Kingdom1.

Hartmann says that today's proposals by the commission seem to have “succeeded in overcoming the most relevant shortcomings” in the current regulations.

The European Federation of Pharmaceutical Industries and Associations (EFPIA), based in Brussels, called the proposed changes “an important step” towards “a much needed simplification and standardisation” of clinical-trials administration.

Although the original directive was supposed to standardize rules across Europe, it was implemented differently in member states. For example, UK academics have complained that their studies are held to tougher standards than elsewhere (see 'UK health research to be rehabilitated').

In response, the commission wants this reform to be pushed through as a regulation rather than as a directive. With directives, member states have the freedom to incorporate them into their national laws as they see fit. Regulations, by contrast, have legal force in all member states once they are fully approved — thus removing the possibility of variation between countries.

Outlining the proposals in more detail, Dalli said that researchers will be able to submit applications to a central electronic portal, which should help to streamline the approval of multinational trials. Member states will coordinate their scientific assessments, but ethical issues will still be assessed nationally.

Another move that will be popular with researchers is a step towards a risk-based approach to regulation. At present, a trial using a drug that is already approved has to follow the same rules as a trial of a new and unproven drug. Dalli said that, in future, low-risk trials would have fewer reporting and insurance obligations.

This story has been updated since it was first published.