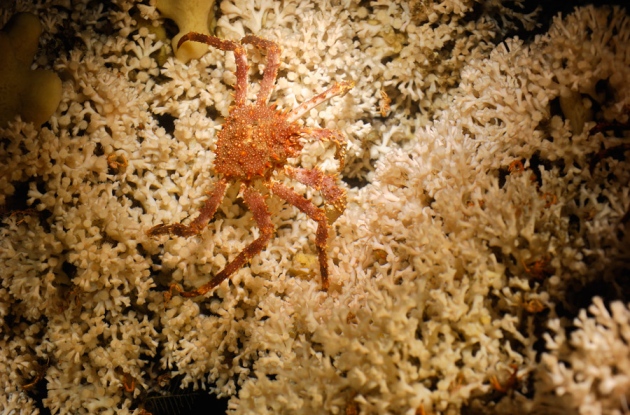 Fishing by bottom trawling can damage the delicate ecosystems of deep-sea corals.

Ocean researchers and politicians who had hoped to see restrictions imposed on fishing in the sensitive ecosystems of the deep ocean were left disappointed last week after the European Parliament voted against tougher controls.

A bitterly fought amendment that would have seen deep-sea bottom trawling completely outlawed in the northeast Atlantic failed by just a handful of votes. It came despite Members of the European Parliament (MEPs) backing a package of measures on deep-sea fishing, including restrictions in vulnerable areas.

“The fishing industry lobbied well,” says Chris Davies, a UK Liberal Democrat MEP and one of those leading the push for a ban. “If nine MEPs had switched their position the outcome would have been different.”

The amendment would have seen a ban on the use of trawl nets, which are dragged across the seabed, and deep-sea gill nets (mesh walls that trap fish by the gills) in waters deeper than 600 metres. Some marine scientists think that such fishing is especially destructive because it damages delicate ecosystems of deep-sea corals and sponges, which take years to recover.

“We might quibble whether high-seas gill-net fishing or dynamite fishing on coral reefs is more destructive,” says Julian Koslow, an oceanographer at the Scripps Institution of Oceanography at the University of California, San Diego, in La Jolla. “But the fact is that deep-sea bottom trawling is well documented to have denuded seamounts of highly diverse deep-water coral and sponge reefs wherever this form of fishing has been practised.”

The fight for a ban on bottom trawling has intensified in recent weeks. Environmental groups, such as the Deep Sea Conservation Coalition, a consortium of more than 70 non-governmental organizations, have lobbied hard for the amendment. They say that a ban would affect only about 20 fishing vessels registered in Spain and France and have little impact on the wider industry. It is estimated that deep-sea fishing accounts for about 2% of the total European Union (EU) catch (see ‘Small fry?’). 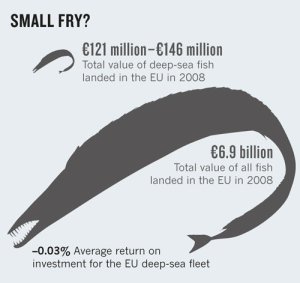 But the fisheries industry has also been active. Michael Park, chief executive of the Scottish White Fish Producers’ Association, a fishing-industry group in Fraserburgh, UK, points to work by the Copenhagen-based International Council for the Exploration of the Sea, which found that the levels of some stocks of deep-sea fish are stable or increasing. Park also says that more vessels than claimed would have been affected by a ban, damaging profitability.

One of the biggest owners of deep-sea fishing vessels, Scapêche in Lorient, France, announced after the EU vote that it would no longer target deep-sea fisheries, although the company has not explained in detail how its practices will change.

Not all deep-sea fishing is harmful, Koslow notes. He says that fishing for the blue grenadier off the coast of New Zealand, and certain deep-sea fish caught with long lines or traps rather than trawls, can be sustainable. But others have proved to be “boom-and-bust fisheries that bring short-term profit to a very small group of fishermen”, he says. “They are typically gone within 5 to 10 years, having depleted the resource, and they leave in their wake the destruction of unique and fragile deep-sea ecosystems, which will likely require centuries to millennia to recover.”

Other researchers agree. Earlier this year, Les Watling, a biologist at the University of Hawaii at Manoa in Honolulu, wrote in Nature that many of the fishing lobby’s claims, for example that catches of non-target species were limited, were unscientific “propaganda” (L. Watling Nature 501, 7; 2013).

The European Parliament’s legislation will now go to the European Council, which consists of ministers from EU member states, for ratification. In theory, the council could approve the bill quickly, but some environmentalists fear that it may try to shelve the issue. Despite their disappointment over the deep-sea trawling decision, they would like to see some of the other measures in the legislation adopted — such as funding for the conversion of deep-sea trawlers to less damaging fishing methods.

Callum Roberts, a marine conservation biologist at the University of York, UK, says that the vote might have ramifications beyond Europe. The United Nations has been passing resolutions to restrict deep-sea fishing for several years. The implementation of its measures is due for review in 2015. A ban in Europe would have sent a really powerful message that this is “a big problem”, says Roberts.