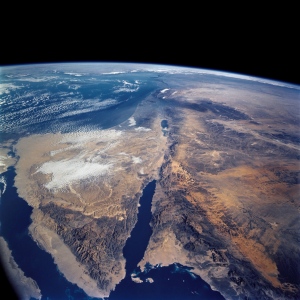 A planned pipeline would deliver water from the Red Sea (centre below) to the inland Dead Sea (centre) to stem its rapid disappearance.

An ambitious plan to build a pipeline to carry water from the Red Sea to the shrinking Dead Sea lurched forward this month, after the World Bank held hearings to gather public comments on the proposal. But environmentalists charge that alternative plans to save the Dead Sea would be cheaper, more flexible and would have less impact on the region’s ecosystems.

If the project proceeds, a 180-kilometre buried pipeline will carry up to 2 billion cubic metres (m3) of sea water per year from the Gulf of Aqaba on the Red Sea through Jordanian territory to the Dead Sea.

The Dead Sea is world's lowest inland area. Proposals have been put forward to set up the pipeline so that the downward flow of the water goes through a hydroelectric plant that would in turn power a desalination plant, providing up to 850 million m3 of fresh water per year to the parched region. Brine from the desalination plant would be discharged into the already-saline Dead Sea, replenishing water that is evaporating from the lake at a rate of more than 1 metre per year.

The estimated cost of the project would be at least US$10 billion, of which about $2 billion would be for facilities that would pump the desalinated water from the Dead Sea towards Amman — a distance of 200 kilometres, and a difference in altitude of 1,000 metres.

The World Bank in the past two weeks held public forums on the proposal in six cities across the three regions affected by the plan: Amman and Aqaba in Jordan; Eilat and Jerusalem in Israel; and Ramallah and Jericho in the Occupied Palestinian Territories. The meetings came after the publication last year of three major reports — a feasibility study1, an environmental and social assessment2 and a study of alternatives3 to the controversial project.

Alex McPhail, team leader for the World Bank's Red Sea–Dead Sea study programme, presented the three reports at the cacophonous Jerusalem hearing. McPhail said that the environmental and social assessment, led by the Environmental Resources Management, an international consultancy, indicates that “all potential major environmental and social impacts can be mitigated to acceptable levels” — with one notable exception.

Studies indicate that if more than 400 million m3 of sea water is added to the Dead Sea, the body of water could be afflicted with algal blooms or the formation of gypsum crystals, with effects that could be difficult to predict. But much more than that amount of water is needed to stabilize or raise the level of the Dead Sea.

The environmental outcome of mixing Red Sea water into the Dead Sea is one of the project’s biggest stumbling blocks, according to the conduit’s biggest opponent, Friends of the Earth Middle East (FoEME), which is headquartered in Amman.

FoEME favours exploring alternative ways of getting drinking water to the region and saving the Dead Sea. These include increasing water recycling and conservation by Israel and Jordan; importing water from Turkey; and desalinating sea water on the shores of the Mediterranean Sea or at Aqaba, then discharging the brine into the Dead Sea and pumping the fresh water directly to Amman.

Pumping desalinated Mediterranean sea water across Israel to Amman “almost certainly would be cheaper” than pumping it across Jordanian territory, says David Meehan, team leader for the feasibility study. “But my perception is that it would be hugely unpopular in Jordan. Basically Israel would control the tap on the water supply to Amman.”

Jordan is a strong proponent of the Red–Dead project, mainly because per capita, the country’s access to fresh water is among the most restricted in the world. Saad Abu Hammour, secretary-general of the Jordan Valley Authority, told the Jerusalem hearing that the scarcity of water in Jordan has been exacerbated by the arrival of more than 250,000 Syrian refugees into the country since the outbreak of the Syrian civil war in 2011.

Raising money for the pipeline may pose a problem at a time when many governments around the world are imposing austerity measures.

But an even more formidable obstacle may prove to be the region's politics, says Gidon Bromberg, director of FoEME in Israel. The project’s progress depends on all three parties signing a treaty, but Bromberg wonders whether the Israeli government is prepared to enter a treaty with the Palestinian Authority.