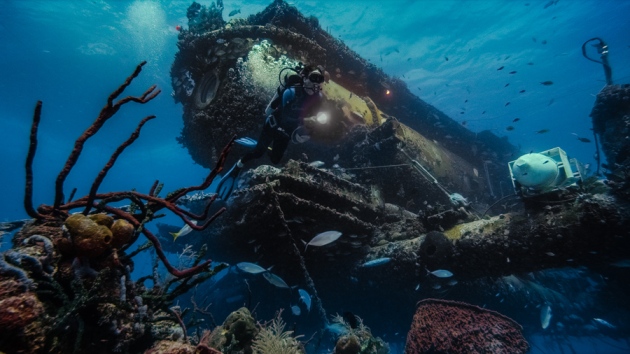 The Aquarius Reef Base enables ocean scientists to spend up to two weeks at a time living on the sea bed, conducting research on the coral reef nearby.

Floating 17 metres below the surface of the Atlantic, oceanographer and environ­mentalist Sylvia Earle is gazing affectionately at a loggerhead turtle dubbed Little Joe. Earle often campaigns to save endangered marine creatures such as loggerheads, but now she wants to protect a steel cylinder that looms not far behind her: the Aquarius Reef Base, which for the past week has been Earle’s home on the sea bed just off Florida’s Key Largo.

Two weeks living in Aquarius allows scientists to stay close to a coral reef, and to spend as much time underwater as they would in a year of sequential dives. Marine biologists say that no other facility gives them a chance to study reef ecosystems so intimately for extended periods. “You become a resident, not a visitor,” says Earle. But to the dismay of many, Aquarius looks set to close its airlocks for good this year — a victim of tight budgets and waning political support.

The base has been operating in Florida since 1992, and at just over 13 metres long and 5 metres wide it comfortably accommodates a crew of six. Owned and largely funded by the US National Oceanic and Atmospheric Administration (NOAA) as part of its National Undersea Research Program (NURP), Aquarius is run by the University of North Carolina Wilmington. Over the past decade, the facility’s budget has ranged from about US$800,000 to $3 million.

But the Aquarius team got a shock in US President Barack Obama’s budget request for 2013 this February. NOAA had recommended that Congress eliminate funding for Aquarius and terminate NURP. “Never once did they mention that this was coming down,” says Thomas Potts, Aquarius’s director.

To draw attention to the lab’s plight, Potts and Mark Patterson, a long-time Aquarius user from the Virginia Institute of Marine Science in Gloucester Point, planned a high-profile final mission. They hoped to win back govern­ment support or attract private donations to a new Aquarius Foundation that would support the facility. Patterson recruited Earle, a former NOAA chief scientist who consulted on Aquarius’s location two decades ago and is now an explorer-in-residence for the National Geographic Society; oceanographer Dale Stokes from the Scripps Institution of Oceanography in La Jolla, California; and under­water film-maker D. J. Roller to join the mission. Countless reporters and members of the support crew also visited the site on each day of the 15–21 July expedition.

Earle and Patterson say that the lab makes a unique contribution to ocean science because it is the only place where researchers can stay on the bottom for long stretches — saturation diving — and reach surrounding undersea study sites in mere minutes. They and other supporters point to a long list of research accomplishments, including assessing the role of sponges in filtering water around reefs (see Nature 457, 141–143; 2009); the discovery of huge waves of cool water from deeper areas offshore that wash over reefs (J. J. Leichter et al. J. Phys. Oceanogr. 35, 1945–1962; 2005); and the development and testing of instruments that enable such work. Supporters also say that the lab is invaluable for ocean outreach. And since 2001, NASA has been renting Aquarius as a training proxy for space operations, because working in water offers one of Earth’s closest analogues to working in microgravity.

But Andrew Shepard, who directed Aquarius from 2004 to 2009, was not surprised by the cut. “It’s the age-old battle of extramural versus intramural costs,” he says. In recent years, NOAA’s Ocean Exploration and Research programme, which supports NURP, has struggled to adequately fund core priorities such as the ship Okeanos Explorer, and Shepard says that extramural programmes such as Aquarius are typically a lower budget priority. He also acknowledges that “not every­body thinks that Aquarius is indispensable to the coral-reef-science community. Some people say it’s in the wrong place, that it might be useful if you could move it around.”

“I think the big questions are, should it keep going, and if so, for how much longer, and what should it look like?” he adds.

NOAA declined Nature’s requests for an interview, but in an e-mailed statement, spokesman David Miller said that Aquarius has been a “vital part” of fulfilling the agency’s core missions. “Unfortunately, our budget environment is very, very challenging and we are unable to do all that we would like,” he adds. Although the president’s 2013 budget request calls for an increase of almost $160 million for NOAA, much of that is designated for weather-satellite programmes.

Last week’s mission did generate substantial attention, including visits from several Florida legislators. But barring the arrival of a last-minute saviour, the Aquarius team will disband in December.

Joe Deppen, a habitat technician and diver for Aquarius for the past three years, is already planning to train at a commercial diving school. “I wish people would realize what an asset Aquarius is,” he says, pausing to consider his words while rocking on a support boat in choppy seas just above the base. “Everyone that comes down realizes what an amazing place this is.”