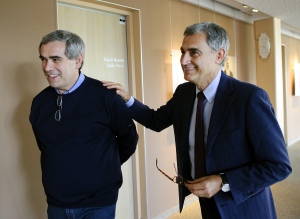 The team that last year reported measurements showing neutrinos travelling faster than light has confirmed that two sources of error flagged in February explain the findings.

Analyses presented internally on 28 March and posted publicly on 30 March show that the measurements were skewed by a combination of a faulty cable and flawed timing in the experiment’s master clock. The group plans to repeat its measurements before definitively scotching the possibility of superluminal travel, first announced in September 20111.

The OPERA (Oscillation Project with Emulsion-tracking Apparatus) collaboration admitted to two possible sources of error on 22 February (see “Faster-than-light neutrino measurement has two possible errors”), but stressed that the collaboration had not quantified them and did not know whether they explained the result.

“We have now an indication [along] that line,” says Dario Autiero of the Institute of Nuclear Physics in Lyons, France, and, until last week, OPERA's physics coordinator.

Autiero resigned from the collaboration on 30 March, a day after OPERA spokesman Antonio Ereditato of the University of Bern. The moves followed months of internal tension and media leaks and, last week, votes of no confidence in Ereditato and Autiero by OPERA’s collaboration board, which consists of representatives from its member institutions.

After the motions won a majority — although not the two-thirds of votes required to force the leadership out — the two men stepped down voluntarily.

OPERA’s September 2011 result made headlines around the world and prompted a rush of theoretical papers attempting to reconcile the result with the impossibility of superluminal travel dictated by Einstein’s special theory of relativity.

The experiment timed neutrinos produced at CERN, Europe's premiere particle-physics laboratory near Geneva in Switzerland, as they arrived 730 kilometres away at OPERA's underground detector at the Gran Sasso National Laboratory in Italy. High-precision atomic clocks stationed at each end of the beam were synchronized using the Global Positioning System (GPS). The team reported in September 2011 that neutrinos arrived at Gran Sasso 60 nanoseconds faster than a light beam would do.

But measurements made in December 2011 found that a GPS signal took 73 nanoseconds longer to pass along an 8-kilometre-long optical fibre linking the receiver to the underground master clock than the 2006 measurement used to calibrate the study. The shift, due to a faulty connection, would have shortened the apparent journey time of the neutrinos by that amount.

However, the measurement also suffered from an additional error, with OPERA’s master clock running fast during the experiment — by 124 nanoseconds per second. In combination, the two faults produce an overall error of around 60 nanoseconds (see “Timing glitches dog neutrino claim”).

OPERA plans to test this hypothesis by repeating its measurement in May, with the faults fixed.

“Puzzle apparently solved, through excellent detective work,” comments theoretical physicist Matthew Strassler of Rutgers University in Piscataway, New Jersey, on his blog. But Strassler also questions why the checks that led to the errors being discovered weren't done before OPERA made its result public.

In a statement released on 30 March, Ereditato defended the decision to announce first and check later. He insists it was right for OPERA to release an “uncomfortable” result for scrutiny, and then seek an instrumental or methodological effect that might explain it.

“This is a natural part of the canons of scientific process. Science forges ahead in the land of the unknown by taking two steps forward and one step back, making corrections and learning from its mistakes,” Ereditato says.