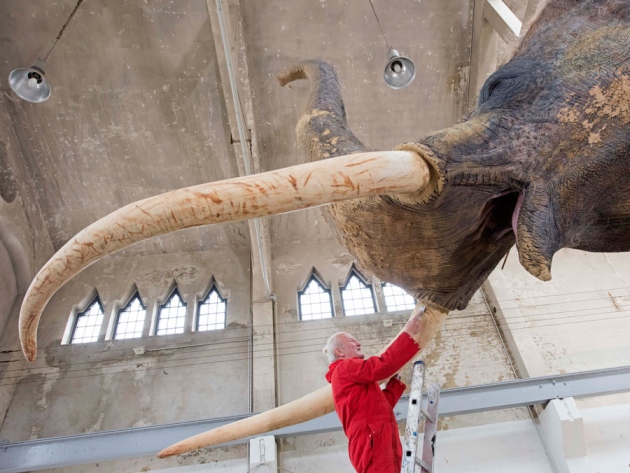 Artist Peter Luckner with a model of a straight-tusked elephant (Palaeoloxodon antiquus), for an exhibition in Braunsbedra, central Germany. This animal is thought to have roamed Germany's Geisel Valley some 200,000 years ago.

The genome of a mysterious ancient fossil has shaken up the elephant family tree.

Modern elephants are classified into three species: the Asian elephant (Elephas maximus) and two African elephants — the forest-dwellers (Loxodonta cyclotis) and those that live in the savannah (Loxodonta africana). The division of the African elephants, originally considered a single species, was confirmed only in 2010.

Scientists had assumed from fossil evidence that an ancient predecessor called the straight-tusked elephant (Paleoloxodon antiquus), which lived in European forests until around 100,000 years ago, was a close relative of Asian elephants.

In fact, this ancient species is most closely related to African forest elephants, a genetic analysis now reveals. Even more surprising, living forest elephants in the Congo Basin are closer kin to the extinct species than they are to today’s African savannah-dwellers. And, together with newly announced genomes from ancient mammoths, the analysis also reveals that many different elephant and mammoth species interbred in the past.

“It’s mind blowing,” says Tom Gilbert, an evolutionary geneticist at the Natural History Museum of Denmark in Copenhagen. The straight-tusked elephant is little-known even among experts, he says. “And the first thing we hear about it is: here’s the genome.”

Love Dalén, a palaeogeneticist at the Swedish Museum of Natural History in Stockholm, says that the study will force a reshuffle of the elephant family tree. “Basically Loxodonta is not valid as a genus name,” he says. He thinks that taxonomists may need to come up with new names for the different species, to better represent the relationship between savannah, forest and straight-tusked elephants.

The results were announced at the 7th International Symposium on Biomolecular Archaeology meeting in Oxford, UK, on 15 September. A team led by evolutionary geneticist Eleftheria Palkopoulou and population geneticist David Reich, both at Harvard Medical School in Boston, Massachusetts, together with evolutionary geneticist Michael Hofreiter at the University of Potsdam in Germany, conducted the study. It was based on the genomes of two 120,000-year-old straight-tusked elephant samples from Germany.

Palkopoulou and her colleagues also revealed the genomes of other animals, including four woolly mammoths (Mammuthus primigenius) and, for the first time, the whole-genome sequences of a Columbian mammoth (Mammuthus columbi) from North America and two North American mastodons (Mammut americanum).

The researchers found evidence that many of the different elephant and mammoth species had interbred. Straight-tusked elephants mated with both Asian elephants and woolly mammoths. And African savannah and forest elephants, who are known to interbreed today — hybrids of the two species live in some parts of the Democratic Republic of Congo and elsewhere —  also seem to have interbred in the distant past. Palkopoulou hopes to work out when these interbreeding episodes happened.

The study represents a landmark in ancient genomics, scientists at the meeting say. The straight-tusked elephants aren’t the oldest ancient genomes — that record belongs to the genome from a horse bone, between 560,000 and 780,000 years old, found frozen in the Canadian Arctic — but they do represent the oldest whole genomes from a warm environment. The fact that one of the straight-tusked elephant genomes was of such high quality — with each DNA letter sequenced on average 15 times — left many scientists awestruck.

"These things are the realm of palaeontology,” says Gilbert. “It’s a sign of where we are today.”

“No one had dared to think about sequencing straight-tusked elephants before,” says Dalén. “It’s just insane to go that far back in time.”