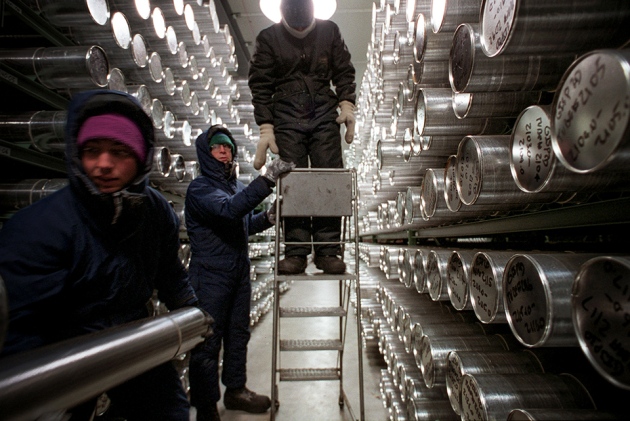 EarthCube is meant to give scientists access to data from stored geological samples, such as these ice cores.

A US National Science Foundation programme to help geoscientists handle ever-increasing amounts of data is facing a mid-life crisis.

Called EarthCube, the five-year-old geoinformatics effort was conceived as a game-changer: it would put obscure data online, link and enrich existing databases across disciplines and develop software tools for scientists. But in March, an external advisory panel warned that EarthCube still lacked a clear definition and might not be sustainable. The project’s leaders have been working to overhaul it, and by the end of this month they aim to release what could be a make-or-break plan for the  US$13-million programme.

“We need to make changes in order to show progress and to pull the community back in,” says Kerstin Lehnert, a geologist at the Lamont–Doherty Earth Observatory in Palisades, New York, who heads EarthCube’s leadership council. “We have to make this work, now.”

EarthCube is the broadest effort yet to bring US geoscience into the modern data era. Some fields are more up to date than others, says Catherine Constable, a palaeomagnetist at the Scripps Institution of Oceanography in La Jolla, California, who co-led the recent review. She notes that US seismologists have compiled their earthquake recordings into well-managed products that are easy to access, whereas geochemists tend to collect individual measurements on individual rock samples that stay mostly in their labs. “There are areas of geoscience with data hidden away in people’s drawers,” Constable says.

EarthCube is supposed to change that by providing tools to give scientists access to rich troves of otherwise-hidden data. “It’s the embodiment of a vision that many of us have had for many years,” says Dawn Wright, a marine geologist and chief scientist at Esri, a data-mapping company in Redlands, California. “But there are a lot of growing pains.”

The programme’s early efforts focused on integrating data across disciplines. The iSamples initiative built a rich database describing physical samples, from sea-floor cores and river-water samples to fossils, so that researchers could track studies being done with each specimen. The GeoLink project developed a way to mine information from published resources, including research papers, field reports and laboratory analyses.

But many say that EarthCube has yet to deliver on its early promise. Charles Connor, a volcanologist at the University of South Florida in Tampa, received EarthCube funding to develop software tools for tracking ash and other volcanic hazards, but says his colleagues are happy with the popular VHub.org research platform. And an ambitious computer-science effort called CINERGI, which was meant to compile data sets and documentation across many fields, has yet to move beyond pilot demonstrations.

EarthCube may be a victim of its ambition, trying to do too much for too many people. The March review noted that five years in, the programme still had poorly defined goals. “There wasn’t a uniform vision of what they wanted to do,” Constable says. That may be because EarthCube has been a grass-roots effort, led by a small group of passionate volunteers. The review recommended reorganizing with fewer leaders to set clear priorities for the entire research community.

Lehnert says that EarthCube’s leaders are taking the criticism to heart. They pulled together a rapid-response team that has been outlining ways to restructure the programme, including introducing metrics — such as the number of software downloads — to assess its performance. There will be more details in the draft plan set for release later this month, she says. “People need to be patient. EarthCube will help tremendously, but development does take time.”

Eva Zanzerkia, the EarthCube programme manager at the NSF, notes that technology develops rapidly, whereas the social aspects of sharing data take a while to develop. “This contrast is something EarthCube grapples with regularly,” she says.

There are some promising EarthCube tools on the horizon. Constable points to the Geoscience Papers of the Future project, which encourages researchers to publish their findings with all the metadata and tools needed for others to replicate their studies. It launched in 2015 and is run by early-career scientists who are pushing for transparency in research.

Five years from now, EarthCube should be nimble enough to quickly give scientists the rich, interlinked data they need, says Lisa Park Boush, a palaeobiologist and palaeoclimatologist at the University of Connecticut in Storrs who helped to set up the programme. “We’ll be able to do in an easy way what would take days, weeks or months now,” she says.