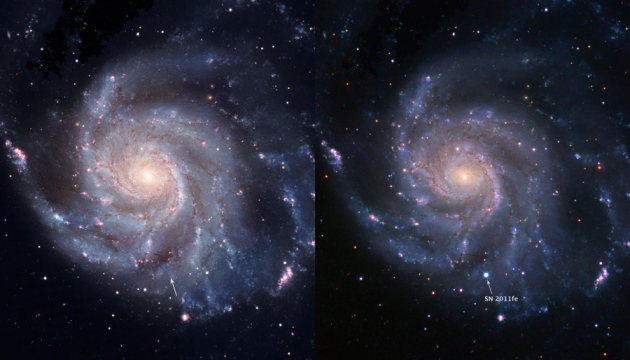 A stellar explosion has helped astronomers to confirm the leading theory as to what causes type Ia supernovae. The explosion is the closest to the Solar System in the past 25 years, and was spotted a mere 11 hours after light from its eruption first reached Earth.

The favoured model suggests that a type Ia supernova is triggered when a white dwarf — an inactive star that crams roughly the mass of the Sun into the volume of the Earth — siphons material from a companion star. The extra mass triggers a thermonuclear explosion that blows the dwarf to smithereens.

Supernova SN 2011fe occurred in the Pinwheel galaxy, just 6.4 million parsecs (21 million light years) away from Earth. Analysing observations of the supernova made in August, a team of astronomers reports today in Nature1 that it has for the first time identified the type of star that exploded. Another team has narrowed down the probable nature of the companion star that triggered the eruption2.

Researchers in the first team calculated the energy of the shock wave that ripped through the star, and learned that the original star could have been no bigger than about one-tenth the radius of the Sun1. It was dense and compact, strongly indicating a white dwarf, says Peter Nugent, an astronomer at the Lawrence Berkeley National Laboratory in Berkeley, California, and a co-author of both studies.

“Until now, white dwarfs were just theoretically implicated in type Ia supernovae,” adds Andy Howell, an astronomer at Las Cumbres Observatory Global Telescope Network in Goleta, California, who is also a co-author of both papers. “Now we've finally got the goods.”

The team's observations also revealed the composition of the white dwarf. Early in the explosion, the researchers were able to record the light spectra of material from the lower-density, outermost layers of the star, including small bits that hadn’t burned at all. They found the fingerprints of carbon and, for the first time, oxygen, moving at high speed. Nugent and his colleagues conclude that the star that exploded was a white dwarf composed mostly of carbon and oxygen.

The team also concluded that the white dwarf’s companion was probably a star that still burns hydrogen at its core, as the Sun does, rather than a larger red giant. Had the expanding shock wave from the exploded star collided with a red giant, the explosion would have become much brighter than was observed.

Using independent methodology, Weidong Li, an astronomer at the University of California, Berkeley, and his colleagues also ruled out a red giant as the companion star2. Li and his collaborators analysed high-resolution images of the Pinwheel galaxy, taken by the Hubble Space Telescope before the star exploded. The Hubble pictures do not record a star in what would be the location of the supernova, thus eliminating the possibility that the companion star was a red giant, which would have been bright, bloated and therefore easily visible.

Stan Woosley, a theoretical astronomer at the University of California, Santa Cruz, notes that although the companion's identity remains unknown, the findings seem to vindicate the standard model for type Ia supernovae — down to the type of white dwarf at the heart of the event. He adds that the companion can't have been very small or faint, given that it must have been able to donate a sizable chunk of mass to the white dwarf.

The result carries a larger significance because observations of type Ia supernovae are commonly used as 'standard candles' to probe the expansion of the universe: this year’s Nobel Prize in Physics was awarded to the heads of two teams who used the explosions to discover that cosmic expansion is accelerating rather than slowing down (see '2011 Nobel Prize for Physics: supernovae and the accelerating universe'). Nugent says that by helping to explain how the explosions come about, the latest papers could make type Ia supernovae even more useful as standard candels.

The SN 2011fe observations “will be powerful constraints when the detailed credible models finally emerge”, says Woosley. He also notes that observations of other type Ia supernovae will be needed to determine the level of diversity within the class and whether that diversity will limit how accurately astronomers can measure cosmic expansion based on supernova data.

To that end, a means for obtaining more and better supernovae observations could be less than a decade away. SN 2011fe was discovered by the Palomar Transient Factory in California, a group of robotic telescopes that scans the skies nightly and alerts astronomers if the brightness of a body has changed. Astronomers are hoping that by 2020, a similar but much larger robotic telescope, the Large Synoptic Survey Telescope, will be open for business. This 8.4-metre instrument will scan the entire visible sky every week and could be an important tool for discovering whether type Ia supernovae can have different compositions or types of companions.

“Given the state of computers and the plans for ever larger transient surveys, I expect we are going to learn a lot, possibly pretty soon,” says Woosley.