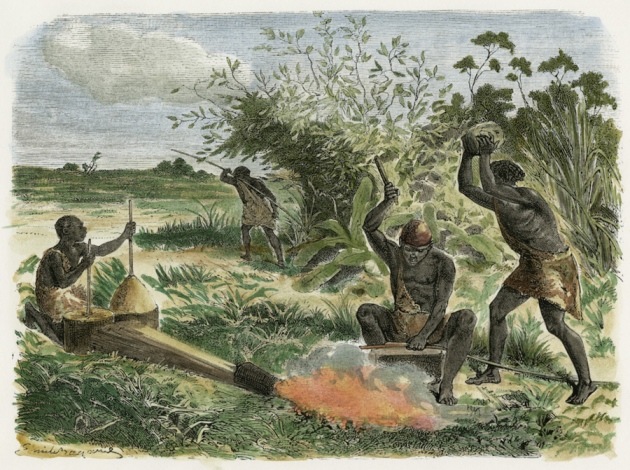 Bantu-speaking migrants may have had a bigger hand in the destruction of Africa's rainforests than was previously thought.

Humans may have played a significant part in the sudden disappearance of rainforests from Central Africa, according to a study published online in Science1. The work contradicts the prevailing view that the expansion of farming practices on the continent was made possible by the increased incidence of long, severe dry spells that destroyed vast tracts of rainforest.

Geochemist Germain Bayon and his colleagues at the French Research Institute for Exploration of the Sea in Plouzané examined the weathering of sediment samples drawn from the mouth of the Congo River. Because deforestation would intensify weathering, the clay samples provide, in effect, a continuous record of the climate for the past 40,000 years.

When the researchers examined the sediment cores, they found that samples that were between 20,000 and 3,500 years old showed weathering that was consistent with the patterns of rainfall in the region. However, around 3,000 years ago, “there was a complete decoupling” between rainfall and the rate of weathering, Bayon says. The findings, he says, indicate that “climate could not be the only factor in explaining deforestation”.

The team suggests that Bantu-speaking peoples from present-day Nigeria and Cameroon, known to have begun emigrating across Central Africa around 4,000 years ago, had “a significant impact on the rainforest” as they cleared land for farming and iron-smelting.

Many researchers are sceptical that humans wielding crude implements could have destroyed such large areas of forest.

“Even today with very intensive slash-and-burn cultivation, agricultural practices do not create bare terrain that would be subject to weathering,” says Katharina Neumann, head of archaeobotany at Goethe University in Frankfurt. “How can we imagine that early Bantu farmers with their simple tools and small population were more effective on the destruction of the rainforest than modern farming in Central Africa?”

Alfred Ngomanda, director of the Research Institute in Tropical Ecology in Libreville, Gabon, also believes the prevailing view — that climate change was largely responsible for the loss of rainforest from Central Africa — is correct. But “Bantu famers have probably played a part in forest loss,” he says, “accelerating local forest degradation.”

Bayon says that the latest work does not necessarily contradict existing theories, but rather illustrates how the combination of culture and climate can affect the environment. “Humans can have a huge impact on natural processes,” he says.

The study also raises important questions about the extent to which deforestation and other human activities may be exacerbating the effects of climate change, says David Harris, deputy director of science at the Royal Botanic Garden in Edinburgh, UK. “We need to be especially vigilant about what the present day human effects will be with logging, modern transport, groups displaced by conflict, and modern markets for food and other forest products,” he says.