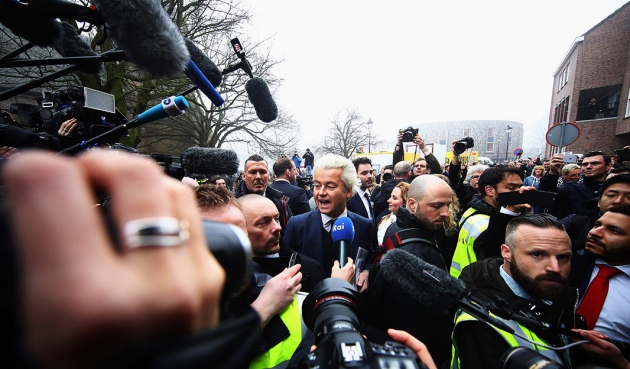 Geert Wilders could win the popular vote in the Dutch election

Geert Wilders is unlikely to lead the Netherlands after next week’s parliamentary elections, but perhaps he doesn’t need to: his influence and agenda are already being felt. Wilders, who is head of the Party for Freedom (PVV) and tipped by many to win the majority of votes, gained popularity with a campaign that bears a striking resemblance to the strategies of Donald Trump.

Wilders’ populist and derivative catchphrase ‘Make the Netherlands ours again’ is aimed firmly at the spectre of mass immigration and ‘Islamization’, which he says will bring about social destabilization, violence and terror. And his (extremely vague, single-page) manifesto doesn’t try to hide his extremism. It calls for a halt to all government support for development aid, wind power, art, innovation and broadcasting: “Here is our plan: instead of financing the entire world and people we don’t want here, we’ll spend the money on ordinary Dutch citizens.”

Success for Wilders’ openly xenophobic and Eurosceptic strategy would mark a political earthquake in a traditionally liberal country — a founding member of the European Union — whose advanced economy owes much to its strong science and innovation base. The Netherlands punches above its weight in science. Dutch host institutions, for example, have won 634 European Research Council grants in the past decade, more than Italy, Spain or Switzerland. In terms of such grants by number of universities and research staff, the Netherlands is Europe’s best performer.

Although Wilders is unlikely to become Dutch prime minister even if he wins the popular vote — the Netherlands has a proportional representation system, and most other parties in the country’s highly fragmented political landscape have ruled out forming a coalition with the PVV — the success of his aggressive campaign might not leave Dutch science unscathed.

The country’s recent approach to developing a national science agenda has been unique. In 2015, the public were invited to submit questions about science. Some 12,000 questions were translated into investment priorities for research, from energy transition to health care and the search for the origin of life. Traditionally, the Netherlands has also relied on science for evidence-based policymaking — to restrict the use of antibiotics in livestock farming, for example. But political priorities, including science, have shifted in the run-up to the elections as immigration and terrorist concerns became more and more central.

“The Dutch vote will set the stage for elections later this year in France and Germany.”

As right-wing populism has spread to the political mainstream, so Dutch universities and research institutions have seen some of their international programmes and policies publicly questioned. Meanwhile, plans by the University of Groningen to create a campus in China have raised objections in parliament over tax money being in­appropriately spent abroad. And Wageningen University, a hub for agricultural science with almost 50% foreign students, inter­national classrooms and English-language courses that have been unquestioned for decades, is suddenly being perceived by some as problematic.

Anxiety is rising in the science community. The rectors of Dutch universities expressed their concerns last month in an open letter, reminding politicians and the public of the merits of freely pursuing science and the drawbacks of restricting immigration for scholars and researchers. It is indeed worrisome that fears of cuts and isolationism have spread to one of Europe’s strongest and most multicultural research nations, whose universities do very well in international rankings. Public trust in science is higher in the Netherlands than in most other highly developed countries. And Dutch citizens expect a lot from science in terms of policy guidance and wealth creation. The country will be hit exceptionally hard if nationalism and vague anti-science sentiment gain traction.

Any coalition resulting from next week’s elections should therefore renew the Netherlands’ firm commitment to science. The current government’s ‘top sector’ approach aimed to improve collaboration between public research institutions and industry in nine key areas, including agriculture and food, water, life sciences and health. That approach, combined with sound funding for curiosity-driven basic research, is a promising strategy with which to address specific societal needs that arise from the country’s economy and physical location.

In general, the next government should continue the national science agenda. In terms of specific policies, it must also reconfirm the Netherlands’ commitment to clean energy and to taking part in international efforts to fight global warming.

Disdain for science and environmental concerns, a common characteristic of populist movements, pays a criminal disservice to humankind. Thankfully, Wilders’ plan to steer the Netherlands into chauvinism is unlikely to work in that country, no matter how hard he tries to copy Trump in rhetoric and world view. But the Dutch vote, which has rarely attracted so much attention in Europe, will set the stage for elections later this year in France and Germany — two nations in which right-wing populism is strongly on the rise. Either way, Dutch voters and policymakers are about to set an example.