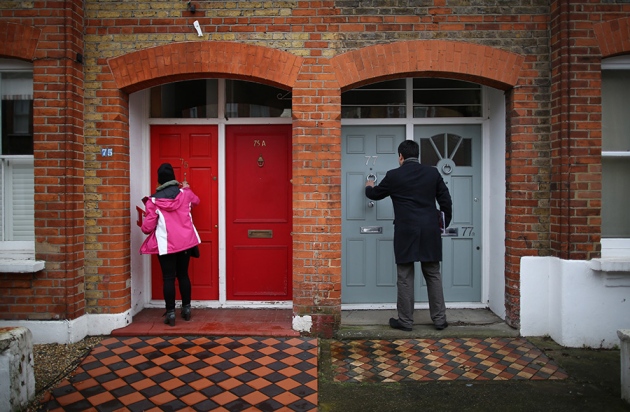 Going door to door can change minds on some contentious social issues.

In 46 years of canvassing neighbourhoods, going door-to-door in hopes of persuading voters to cast their ballots in a particular direction, David Fleischer has learned a few lessons. Some of them are counterintuitive.

When a voter uses a hurtful slur during the conversation, it can be a sign of a breakthrough, he says. “That’s a good thing,” says Fleischer, who often canvasses to bolster support for the equal rights of lesbian, gay, bisexual and transgender (LGBT) people. “They’re being honest. And that means we’re on the brink of having a wonderful, wonderful conversation.”

Fleischer is the director of the Leadership LAB project at the Los Angeles LGBT Center in California, where he teaches an unconventional approach that favours leisurely, non-judgemental conversations over hasty elevator pitches. And according to a study published1 in Science on 7 April, that approach works: canvassers employing the method significantly reduced prejudice against transgender people in around 10% of a sample of roughly 250 individuals. The effect lasted for at least three months after the conversation with canvassers.

The study, by political scientists David Broockman at Stanford University in California and Joshua Kalla of the University of California, Berkeley, opens the door to a new generation of rigorously designed field experiments to study prejudice, says Elizabeth Levy Paluck, a social psychologist at at Princeton University in New Jersey. “Methodologically it’s the gold standard,” she says. “And the bonus is that it has really encouraging results for tolerance and for the rights of transgender people.”

It may also help to remove some of the stigma that has haunted political science after accusations of misconduct and fabricated data led to the retraction of a similar study, published in Science in 20142. The study claimed that canvassing changed attitudes towards gay marriage, an effect that purportedly lasted nine months. But when Broockman and Kalla, who were not involved in the 2014 study, set about to extend the work to transgender prejudice, they found inconsistencies in its data and execution.

That paper was retracted on 5 June 2015 at the behest of the study's second author, political scientist Donald Green of Columbia University in New York City. The study's first author, Michael LaCour — then a graduate student at the University of California in Los Angeles — stood by his results but did admit to misrepresenting some aspects of the work.

It was a painful episode for those who were advocating the use of field trials in the social sciences, says political scientist Brian Calfano of Missouri State University in Springfield. Such studies are not the norm: Green and Paluck have sifted through hundreds of published and unpublished studies conducted prior to 2009, and found that only 11% of them tested the effect of a prejudice-reducing intervention in the field, rather than in a laboratory.

When LaCour’s paper came out, some social scientists were incredulous of his results — both because of the approach he took and because the findings ran counter to conventional wisdom. “There had been a lot of resistance to the idea that people can be persuaded on these controversial issues,” says Calfano. “There was a ‘too good to be true’ reaction.” The misconduct revelation, he says, only added to the pessimism.

But the latest transphobia study could signal a reversal. Broockman and Kalla followed the efforts of 56 canvassers as they went door-to-door in Miami-Dade County, Florida. The canvassers talked to 255 voters about transgender equality, and to another 246 voters about recycling, as a control group.

About one in ten voters that were canvassed about transgender discrimination became less prejudiced, according to responses to follow-up surveys up to three months after the canvassers made contact. Broockman says the magnitude of the change approximates the degree of improvement from 1998 to 2012 in the average opinion of an American towards gay and lesbian people.

Broockman hopes to continue to check in on the study participants to find out how long their responses will last. But there are signs that the change in attitude was resilient, at least in the short-term: six weeks after the intervention, the researchers showed participants television advertisements that portrayed anti-transgender stereotypes. Follow-up surveys showed that the ads had no lasting effect on their opinions.

Broockman plans to extend his work to other issues, such as attitudes about climate change. Palluck, who uses field experiments to study everything from post-conflict resolution in Rwanda to bullying in school, says that Broockman’s designs could be used to test whether attitudes towards undocumented immigrants could be changed. For Calfano, the big question is whether the technique could address deeply ingrained racial biases. “You’re going to see a lot more of these studies going forward,” he says.

But the approach may have its limits. On 7 April, Broockman also released negative results from a study of attempts to change opinions in the United States about abortion3. For Fleischer, that need not bode ill for canvassing on other topics. It took him seven years to work out the right approach to talk to people about LGBT issues, he says, and he has less experience addressing attitudes toward abortion. It may take time to fine-tune the approach for other sensitive subjects.

Meanwhile, the transphobia study offers hope that doing so could be worth the effort. “We don’t know the full potential of these results yet,” he says. “But they suggest we really could, if we want, live in a less prejudiced society.”