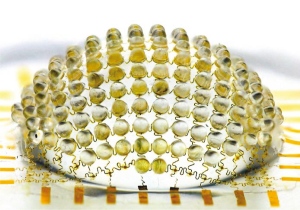 Researchers built an artificial composite eye by first making a flat array of lenses and then inflating it into a spherical shape.

Insects have a wide field of view and are acutely sensitive to motion, as anyone who has tried chasing a housefly knows. Researchers have now created a digital camera that mimics the curved, compound structure of an insect eye. These cameras could be used where wide viewing angles are important and space is at a premium — in advanced surveillance systems, for example, or in unmanned flying vehicles and endoscopes.

Insect eyes are made up of hundreds or even thousands of light-sensing structures called ommatidia. Each contains a lens and a cone that funnels light to a photosensitive organ. The long, thin ommatidia are bunched together to form the hemispherical eye, with each ommatidium pointing in a slightly different direction. This structure gives bugs a wide field of view, with objects in the periphery just as clear as those in the centre of the visual field, and high motion sensitivity. It also allows a large depth of field — objects are in focus whether they're nearby or at a distance.

The biggest challenge in mimicking the structure of an insect eye in a camera is that electronics are typically flat and rigid, says John Rogers, a materials scientist at the University of Illinois at Urbana-Champaign. “In biology, everything is curvy,” he says.

The new device, which Rogers and his colleagues describe today in Nature1, comprises an array of microlenses connected to posts that mimic the light-funnelling cones of ommatidia, layered on top of a flexible array of silicon photodetectors. The lens–post pairs are moulded from a stretchy polymer called an elastomer. A filling of elastomer dyed with carbon black surrounds the structures, preventing light from leaking between them. The lens is about 1 centimetre in diameter.

“The whole thing is stretchy and thin, and we blow it up like a balloon” so that it curves like a compound eye, says Rogers. The current prototype produces black-and-white images only, but Rogers says a colour version could be made with the same design.

This is the first time researchers have made a working compound-eye camera, says Luke Lee, a bioengineer at the University of California, Berkeley, who was not involved with the work. The trick, he says, was building and integrating all the parts of the ommatidia. “Usually people just show one part, the lens or the detector,” says Lee. In 2006, for example, Lee's group made arrays of artificial ommatidia that had microlenses and light-guiding cones, but no photodetectors2.

He says that Rogers made the device work by predicting the mechanics of how his designs would stretch before building them — to make sure that the lenses would not be distorted when the device was inflated, for example. 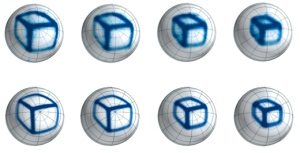 Images of a box captured at four different distances from the camera (top row), compared with a computer simulation of the camera's performance (bottom row).

Rogers describes the camera as a “low-end insect eye”. It contains 180 artificial ommatidia, about the same number as in the eyes of a fire ant (Solenopsis fugax) or a bark beetle (Hylastes nigrinus) — insects that don't see very well. So far the researchers have tested it by taking pictures of simple line drawings (see image).

With the basic designs in place, Rogers says, his team can now increase the resolution of the camera by incorporating more ommatidia. “We’d like to do a dragonfly, with 20,000 ommatidia,” he says, which will require some miniaturization of the components.

Alexander Borst, who builds miniature flying robots at the Max Planck Institute of Neurobiology in Martinsried, Germany, says that he is eager to integrate the camera into his machines. Insects’ wide field of vision helps them to monitor and stabilize their position during flight; robots with artificial compound eyes might be better fliers, he says.

Rogers says that his next project is to go “beyond biology”, by inflating or deflating the camera to adjust its field of view.