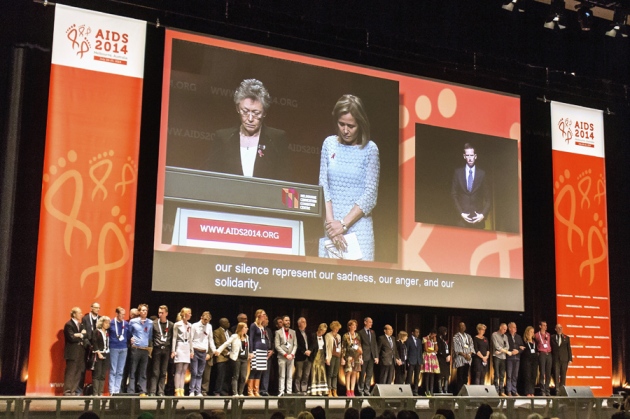 Participants in the International AIDS Conference paid tribute to researchers killed in a plane crash.

With heads bowed, many hand-in-hand with their neighbours, hundreds of attendees at the 20th International AIDS Conference in Melbourne, Australia, held a moment of silence on 20 July to honour the six HIV researchers and activists who died on Malaysia Airlines flight MH17.

Tributes to the dead scientists, all of whom were on their way to the meeting, were led by 11 former, present and future presidents of the Inter­national AIDS Society (IAS), which runs the conference. Françoise Barré-Sinoussi, the current IAS head, dedicated the event to the delegates — five Dutch and one British — who were killed, and Lambert Grijns, Dutch Ambassador for Sexual and Reproductive Health and Rights and HIV/AIDS, read a letter of condolence. Later, at an exhibition booth run by several Dutch charities, attendees were invited to write notes in a book of remembrance.

“The mood has been one of sadness and loss,” Anthony Fauci, director of the US National Institute of Allergy and Infectious Diseases, told Nature. “We are feeling the vulnerability for all of us, because there are 12,000 people here, and [most] of us just 2 days ago stepped on a plane to travel thousands of miles to get here, and the tragedy is that some of us didn’t make it.”

The IAS had earlier confirmed the names of those who died when the plane was shot down over eastern Ukraine on 17 July. They were: Joep Lange, a clinical virologist at the University of Amsterdam and former president of the IAS (see Nature http://doi.org/tsx; 2014); his partner Jacqueline van Tongeren, head of communications at the Amsterdam Institute for Global Health and Development, and a long-time AIDS nurse; Glenn Thomas, media-relations coordinator at the World Health Organization in Geneva, Switzerland; Pim de Kuijer, an activist and lobbyist for STOP AIDS NOW! in Amsterdam; Martine de Schutter, a programme manager at Aids Fonds in Amsterdam; and Lucie van Mens, director of programme development at the Female Health Company in Chicago, Illinois, which produces female condoms.

Despite the sombre atmosphere, conference participants were keen to take inspiration from the work and passion of those killed. “Most people are saying that if Lange, Thomas and the others were here, they would want us to continue the struggle,” said Fauci. “So it’s really a parallel emotion, of sadness and loss but also of commitment to move ahead according to the same passion that the people who are not here have shown over the years.”

Sharon Lewin, head of the department of infectious diseases at Monash University in Melbourne, and a co-chair of the conference, said that although sadness lingered, the general mood had changed after the opening ceremony. “There will be further memorials, but in general the conference has returned to its purpose of fighting HIV/AIDS,” she told Nature.

This year’s conference focuses on bringing treatments for HIV and AIDS to people in developing countries. Barré-Sinoussi reminded delegates at the opening session of the need to “step up the pace and redouble our efforts. Too many countries are still struggling to address their HIV epidemic with their most vulnerable people consistently being left behind.”

It is in this effort that the loss of Lange, who helped to establish the safety and effectiveness of treatment using multiple anti­viral drugs, will be most sorely felt, said Fauci. “He was a very inspiring, passionate catalyst. He was an advocate for getting treatment to whoever needs it, no matter where they are in the world.”