Keeping track of a country’s greenhouse gases is an accounting problem of epic proportions. In the United States, scientists have relied on a mix of methods to build up their national emissions inventory, including monitoring the electricity output of a power plant and assessing the quality of the fuel that powers it.

Now they have a new resource: official data from the companies themselves, collated into a user-friendly online database that was launched on 11 January by the US Environmental Protection Agency (EPA).

“It’s a great resource, and I’m sure people will find interesting things to do with it,” says Gregg Marland, a geologist at Appalachian State University in Boone, North Carolina, who led the development of guidelines for the Intergovernmental Panel on Climate Change on how to construct and use national emissions inventories.

The inventory covers industrial, commercial and government facilities that emit more than 25,000 tonnes of carbon dioxide equivalent per year, and was prompted by a law passed in 2008 that was meant to support the growing efforts towards regulating greenhouse gases. Plans for that regulatory programme collapsed in 2010, but EPA officials continued to work on a database, which would still provide investors and consumers with statistics to help them pressure industry to cut emissions.

The inventory covers facilities that directly emit about half of the country’s total emissions, but does not include emissions from agriculture or land use. The online database allows users to compare and rank about 6,200 facilities by state, sector, and type and volume of greenhouse gases, including the ubiquitous carbon dioxide and methane and the more esoteric fluorinated chemicals.

The data should help researchers trying to measure and track greenhouse-gas emissions, as well as those studying natural carbon cycles. As scientists pin down exactly where anthropogenic carbon emissions are coming from, Marland says, they can separate out carbon uptake and emissions by plants and soils. “The better we understand both the magnitude and distribution of human emissions, the better we understand what is happening in the biosphere.”

Some database searches produce very familiar results. Carbon dioxide makes up about 95% of the greenhouse-gas emissions logged (although if emissions from agriculture and other sectors in the full US inventory are included, that proportion would drop to around 83%). The state with the largest overall emissions is Texas, which logged 387 million tonnes of carbon dioxide equivalent in 2010. And power plants overshadow any other stationary sources of greenhouse gases, accounting for about three-quarters of emissions in the inventory (see ‘The gas tracker’). 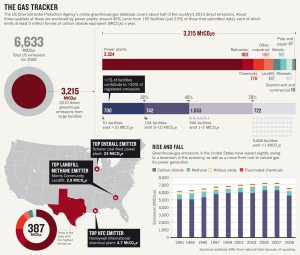 But there are also some eye-opening statistics. Just 2.5% of the facilities that have submitted data to the EPA are responsible for 45% of the emissions, for example. And almost all of the United States’ emissions of trifluoromethane (also known as HFC-23), a potent greenhouse gas, come from just two facilities — the Honeywell International plant in Baton Rouge, Louisiana, and the Dupont manufacturing plant in Louisville, Kentucky. Since 1990, US producers have voluntarily reduced by about 85% their emissions of trifluoromethane, which is a by-product of the manufacture of the refrigerant and chemical feedstock chlorodifluoromethane.

The flood of data does not mean that scientists can stop measuring greenhouse-gas emissions in the atmosphere. Pieter Tans and his team at the National Oceanic and Atmospheric Administration’s Earth System Research Laboratory in Boulder, Colorado, measure greenhouse-gas plumes from major facilities through a network of tall monitoring towers, for example. The annual totals in the database will certainly help to improve their atmospheric models, he says, but monitoring how emissions vary over the course of hours and days is still vital.

Totalling those real-time measures should also provide a way to verify the companies’ annual estimates. “The hypothesis is that these are correct emissions estimates,” Tans says. “We can test that to see whether what is being reported is consistent with actual observations.”