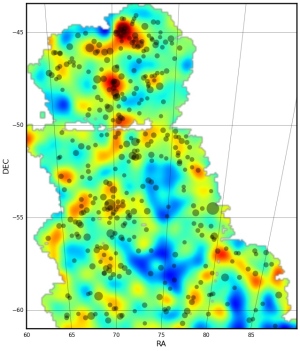 Cosmologists have produced an enormous map of the distribution of dark matter in our Universe, tracing the invisible substance by monitoring its gravitational effects on light.

The picture maps clumps and voids of dark matter in a patch of sky that covers around two million galaxies and includes features hundreds of millions of light years across. Chihway Chang of the Swiss Federal Institute of Technology in Zurich presented the work on 13 April at a meeting of the American Physical Society in Baltimore, Maryland. She and her colleagues also describe their results in an upcoming issue of the Monthly Notices of the Royal Astronomical Society1.

Dark matter is about five times more abundant than the matter that we can see. Although invisible, its presence can be detected because it curves space-time. Large concentrations of dark matter in the foreground bend the light coming from background galaxies, skewing images of them. This effect, known as weak gravitational lensing, has been used to understand dark matter in single clusters of galaxies, but the latest survey ups the scale.

Using a 570-megapixel camera mounted on the Victor M. Blanco telescope at the Cerro Tololo Inter-American Observatory in Chile, the researchers photographed a patch of southern sky spanning, from the perspective of a viewer on Earth, an area about that of 700 Suns. They pinpointed small distortions in the shapes of the most distant galaxies to map the mass of dark matter in the foreground.

The observations fit the standard picture of cosmology strikingly well, because dark matter is thought to be the main driver in the formation of large-scale cosmic structures, says Chang. “We identify some truly massive structures, about 100 million light years across,” she adds, referring to the map's giant voids (blue regions) and superclusters of dark matter (red regions). Follow-up studies will be able to confirm whether those are genuine structures, she says.

The map constitutes only 3% of the region of the sky that the project, known as the Dark Energy Survey (DES), will cover by its conclusion in 2018. The survey is named after dark energy rather than dark matter because its ultimate goal is to chart the distribution of matter well enough to measure dark energy, the enigmatic force that is pushing the Universe to expand at an accelerating pace.

Weak gravitational lensing has produced some of the most convincing evidence of the existence of dark matter. A landmark 2006 study of two colliding clusters of galaxies — known collectively as the bullet cluster — found that the region with the strongest lensing was markedly offset from the bulk of visible matter, evidence that dark matter was bending space-time. In a paper published in Science last month2, David Harvey of the Swiss Federal Institute of Technology of Lausanne and his collaborators published similar evidence for 72 examples of such collisions, the largest collection so far. “Surveys such as DES will ultimately find many more colliding clusters similar to those in our study,” he says.

Gravitational lensing caused by dark matter can be spotted not only by looking at light from distant galaxies, but also by examining the Universe's most ancient light — the cosmic microwave background. In a study published on 13 April, researchers report using the Atacama Cosmology Telescope in Chile to measure these distortions to map the distributions of dark matter around 12,000 galaxies3.