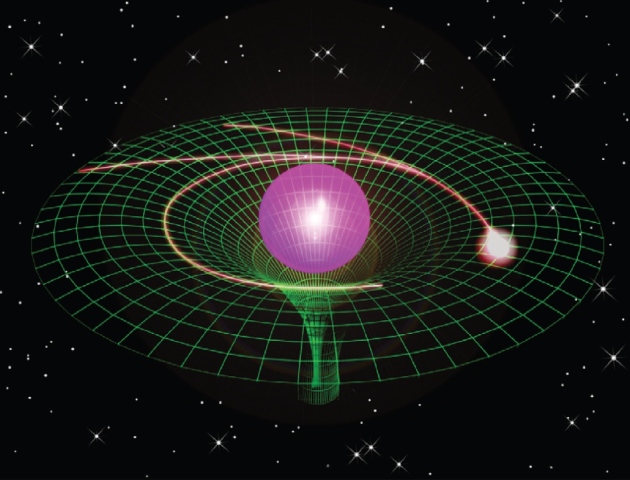 The warping of the empty space around a massive star means that the shortest path of light around a star is a 'curved' one — but the bending of light rays in a medium can mimic the same effect.

It took two major expeditions charting the solar eclipse of 1919 to verify Albert Einstein’s weird prediction about gravity — that it distorts the path of light waves around stars and other astronomical bodies, distorting objects in the background. Now, researchers have created the first precise analogue of that effect on a microchip.

Any large mass distorts the geometry of space around it, for instance making parallel light rays diverge or converge. One consequence, described by Einstein’s general theory of relativity, is that objects behind a body such as the Sun may look magnified or distorted as the optical path of light goes through the region of warped space.

Metamaterials scientist Hui Liu of Nanjing University in China and his colleagues mimicked this 'gravitational lensing' — which affects light in the vacuum of space — by making light travel through solid materials instead. Different transparent media have different indexes of refraction, causing light to bend. One example is at the interface between water and air, a familiar effect that makes a pencil look broken when it is half-dipped in water. But if a medium has an index of refraction that varies gradually rather than abruptly, it will make the the paths of light rays curve as they travel through it.

The varying refraction index bends light in the same way that gravity curves space-time because light always travels along the path that takes the shortest time — regardless of that path’s geometry, notes physicist Ulf Leonhardt of the Weizmann Institute of Science in Rehovot, Israel, who was not involved in the study. 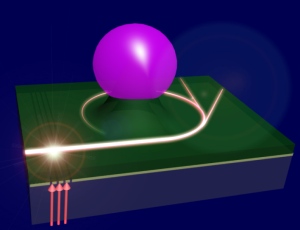 The optical analogue of a star's gravitational lensing was created by having laser light travel on a plastic-coated glass slab (green). The surface tension of a 32-micrometer-wide sphere (purple) embedded in the slab made the plastic thickness vary in a continuous way. This mimicked a variation in the plastic's refractive index — which, in turn, simulated the curvature of space.

Liu and his collaborators simulated the gravitational lensing of a star on an integrated photonic chip. A layer of clear plastic on the chip acted as a waveguide, confining light to the chip’s surface. To change the index of refraction of the plastic, the researchers had to vary the plastic’s thickness. They did so by heating the plastic and adding polystyrene microspheres before the plastic cooled. Because the plastic rose upwards around the microspheres on cooling, the thickness of the waveguide increased near these miniature balls. The varying index of refraction the team achieved happens to be very similar to the bending of space-time geometry around a massive star.

Liu and his team describe their findings online today in Nature Photonics1.

“This is indeed the first time an exact solution of Einstein's equations was mimicked” using an optical model, says Leonhardt. The simplicity of the experiment — microspheres on plastics — “beautifully illustrates some of the ideas of general relativity”, he adds.

Leonhardt notes that the optical analogue developed by Liu’s team cannot replicate the most extreme example of gravitational curvature — a black hole. These objects have a gravitational pull so strong that space-time closes in on itself, so that it has a surface — the event horizon — through which light can enter but never exit. In 2010, researchers at Southeast University in Nanking, China, made artificial black holes that trap microwave light. They did so using strips of circuit boards coated with a thin layer of copper etched in intricate patterns and arranged in concentric circles2.

Still, says study coauthor Dentcho Genov of Louisana Tech University in Ruston, the team’s microchip model “may hold the key to the elucidation of phenomena based on general relativity that are extremely difficult to study through direct astronomical observations”. This includes cases of radio waves with wavelengths comparable to the size of the celestial object, he notes.

In its ability to steer, contain and focus light, the microchip system may also help to enhance the performance of solar cells, Liu adds.