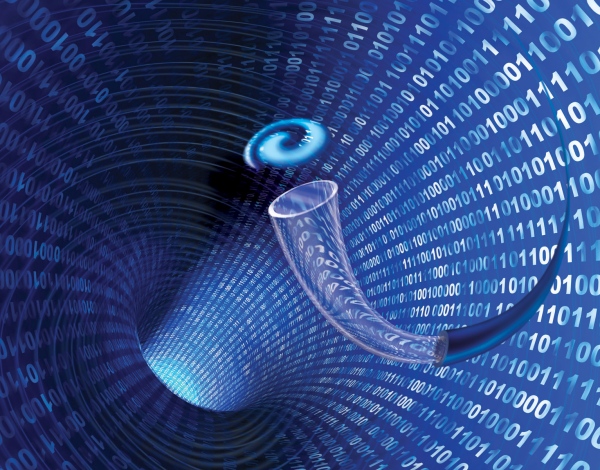 Twisting light could create a new lane of traffic on the information superhighway.

Twisty beams of light could boost the traffic-carrying capacity of the Internet, effectively adding new levels to the information superhighway, suggests research published today in Science1.

Internet traffic is growing exponentially and researchers have sought ways to squeeze ever more information into the fibre-optic cables that carry it. One successful method used over the last 20 years essentially added more traffic lanes, using different colours, or wavelengths, for different signals2. But to compensate for the added lanes, each one had to be made narrower. So, just as in a real highway, the spacing could get only so tight before the streams of data began to jumble together.

In the last few years, different groups of researchers have tried to encode information in the shape of light beams to ease congestion, using a property of light called orbital angular momentum. Currently, a straight beam of light is used to transmit Internet signals, but certain filters can twist it so that it corkscrews around with varying degrees of curliness as it travels.

Previous experiments using this effect have found that differently shaped light beams tend to jumble together after less than a metre3, 4.

Now, a team of researchers from Boston University in Massachusetts and the University of Southern California in Los Angeles has found a way to keep the different light beam shapes separated for a record 1.1 kilometres.

The researchers designed and built a 1.1-kilometre-long glass cable, the cross section of which had a varying index of refraction — a measure that describes how fast light can travel in a particular medium. They then sent both twisty and straight beams of light down the cable.

The team found that the light output matched the input — light beams of each shape were not getting muddled together. The varying index of refraction apparently affected each light shape uniquely, so that different shapes moved at different speeds down the cable. "That meant that I could keep them separated," says Siddharth Ramachandran, an electrical engineer and leader of the Boston University team.

The work published today used clockwise and anticlockwise versions of twisted light with a specific curliness, but Ramachandran says that the team has since done other research that suggests that about ten different beam shapes can be used to convey information.

That is exciting because each shape could potentially act as an entirely new level of traffic on the information superhighway. On each level, streams of data could be further divided into narrow lanes of colour, maximizing flow. "We showed a new degree of freedom in which we could transmit information," says Ramachandran.

Translating the work from the lab to the real world will take time, however, in part because current Internet cables carry only straight beams of light. A more immediate goal, says Ramachandran, might be to install cables that are capable of carrying twisty light on the short distances between servers on giant 'server farms', used by large Web companies such as Facebook.

Miles Padgett, an optical physicist at the University of Glasgow, UK, is impressed with the work and is optimistic about its potential. "One day, more bandwidth will mean we can all Skype at the same time," he says.