Two investigations into the case of alleged plagiarism by Romania’s prime minister, Victor Ponta, have reached opposite conclusions, ramping up the tension in a fierce struggle over political power in Bucharest.

Ponta stands accused of having copied large sections of his 2003 PhD thesis on the International Criminal Court. 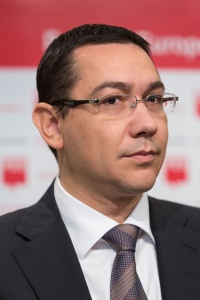 Romanian Prime Minister Victor Ponta has been accused of plagiarizing parts of his thesis, but two separate investigations into the case have reached opposite conclusions.

The government-appointed NEC found that Ponta’s doctoral thesis met the academic requirements at the time that it was published. The NEC says that Ponta’s only mistake — in its view a minor flaw — was to have listed his sources at the end of his 432-page thesis without giving footnotes on the actual pages where he reproduced sections of text from the sources.

But the University of Bucharest's commission said that he did copy and paste large sections of his thesis. The commission, comprising members of all faculties, found plagiarized elements on 115 out of 297 pages (excluding appendices) of the thesis. The commission will report its findings to the university senate, which could then propose to the education ministry that Ponta’s PhD be withdrawn.

Academic requirements at Romanian universities were no different in 2003 to what they are today, said Marian Popescu, who chaired the university commission, at a press conference in Bucharest today.

On 29 June, the Romanian National Council for the Attestation of University Titles (CNATDCU) had concluded that Ponta had copied and pasted 85 pages of his thesis from three books without properly marking the copied sections as quotes (see 'Romanian panel calls prime minister a plagiarist').

Ponta, who has not responded to Nature’s request for comment, previously said that he considers the NEC the only body that can authoritatively rule over the case. The government argues that neither the University of Bucharest nor the CNATDCU have a mandate to investigate allegations of misconduct on the part of state dignitaries. He is therefore likely to keep his PhD.

“In my opinion, the [NEC] decision means that this is a closed case," Romanian education minister Ecaterina Andronescu said on television on Thursday.

However, according to Romania’s education law, the CNATDCU is supposed to be in charge of investigating plagiarism charges in PhD theses. And critics point out that the NEC may have been politically biased in its verdict. A member of Ponta’s cabinet replaced all of the members of the NEC in June following allegations of plagiarism against former research minister Ioan Mang (see 'Plagiarism charge for Romanian minister').

Likewise, the CNATDCU was effectively disbanded by a government order on 29 June while the group was meeting over its decision on Ponta's case.

“It’s a shame,” said Lazar Vlasceanu, a sociologist at the University of Bucharest and former vice-president of the CNATDCU in an email to Nature. “I feel extremely embarrassed to have such ‘colleague academics’ as those in NEC. We should call for a round-table of representatives of the three bodies (CNATDCU, NEC and Bucharest University) to present their views on the divergences between one body’s evaluation and the other two, thus helping them and the public opinion to get out of any eventual confusion.”

Ponta has previously accused his political opponents — including Romanian President Traian Basescu — of having launched the plagiarism charges as part of a political campaign against him. A referendum on the impeachment of President Basescu is due to be held on 29 July.

Meanwhile, concerns are rising in the European Union (EU) over what political observers say is a lack of respect in Romania for the fundamental principles of democracy. The move to impeach Basescu “took place in an overly polarised political system where mistrust between political entities and accusations are a common pattern”, the European Commission wrote in an 18 July report analysing Romania's progress in reforming its justice system and overcoming corruption since joining the EU in 2007.