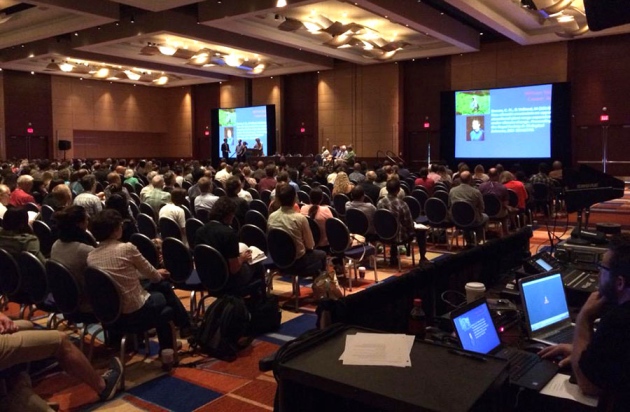 Attendees of the annual meeting of the Ecological Society of America last week thought the society was restricting live-tweeting at the event.

To tweet or not to tweet? That was the question many ecologists struggled with at the annual meeting of the Ecological Society of America (ESA) last week in Baltimore, Maryland. Attendees at last year’s conference freely tweeted during researchers’ presentations, but this year they received a surprising and confusing tweet from the society the evening before the meeting started. 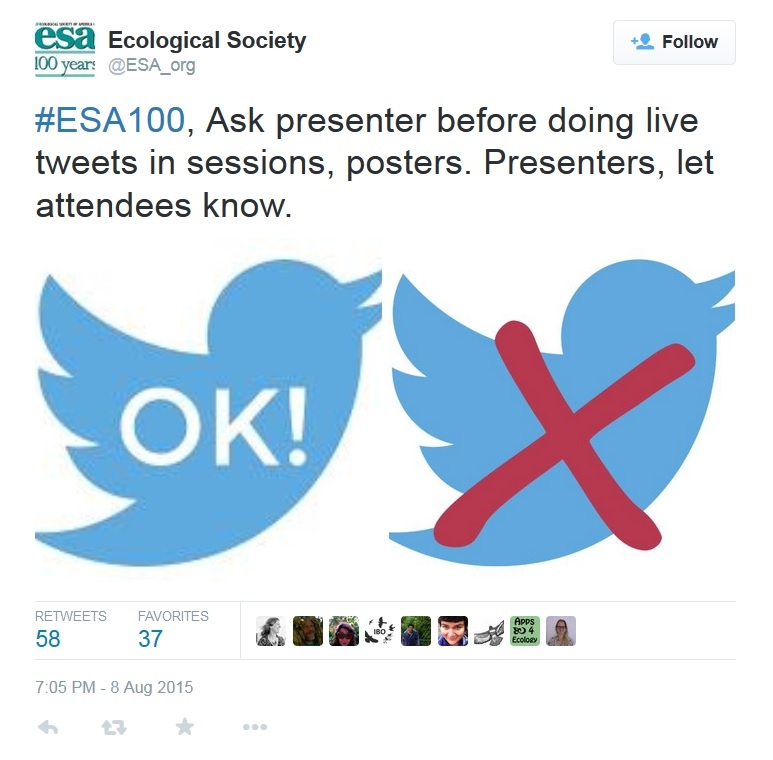 The request to gain consent from speakers before tweeting about their presentations rankled many. In a blog post, Terry Wheeler, an entomologist at McGill University in Quebec, Canada, said that ESA was “taking a step backward” from its open social-media policy of past years. But Liza Lester, a communications officer at ESA, says that the society supports tweeting at conferences and did not intend to change its stance. “It was a misunderstanding,” she says.

Writing on the Lyman Entomological Museum blog, Wheeler says that the Twitter restriction caused a lot of frustration among ESA meeting attendees and long-distance observers, who wondered why there was such a lull in social-media chatter. He notes that the last-minute announcement differs from the code of conduct printed in the conference programme, which says that attendees cannot take photographs of slides or posters without permission and that they should avoid posting online “detailed information from presentations.” Those restrictions, he writes, seem reasonable. But the policy in the programme made no mention of requiring permission to live-tweet.

Many conferences allow live-tweeting, but some restrict tweets about research data or give speakers the chance to opt out of having their talk reported on Twitter by telling the audience at the start. At the ESA meeting, however, many presenters did not clarify whether audience members could live-tweet their talk, leaving Twitter users unsure of what to do.

Conference attendee Joshua Drew, a marine biologist at Columbia University in New York, says that this uncertainty put a damper on his own tweeting. Out of the 44 or so talks that he attended, by his count, only 5 presenters expressly allowed tweeting and 2 actively discouraged it. “That left 37 talks that I couldn’t talk about because of the policy,” he says. He adds that he understands why some scientists might not want to share preliminary data, for fear of getting scooped. Still, he says that he does not see the need for much secrecy in ecology. “If somebody hears about my work, it’s not like they’re going to go out and capture 400 fish to copy me.”

In an interview, Wheeler said he suspects that many of the presenters at the ESA meeting did not even know they were supposed to state their preference about tweeting, perhaps because they are not on Twitter and never saw the society’s message.

Sarah Supp, an ecology postdoc who attended the meeting, tweeted: 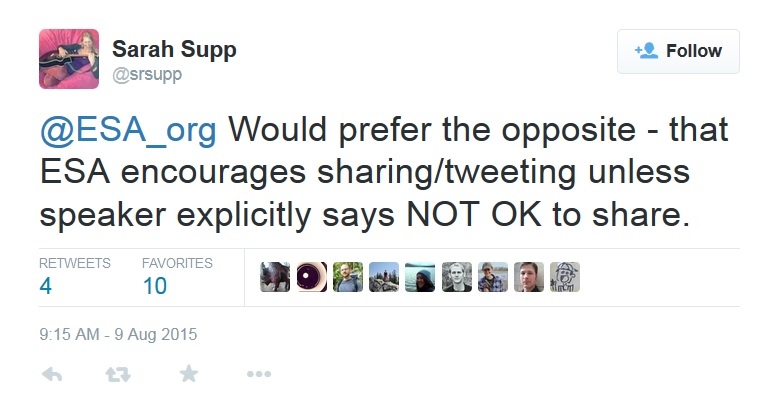 David Moore, an ecosystem scientist at the University of Arizona in Tucson, agreed: 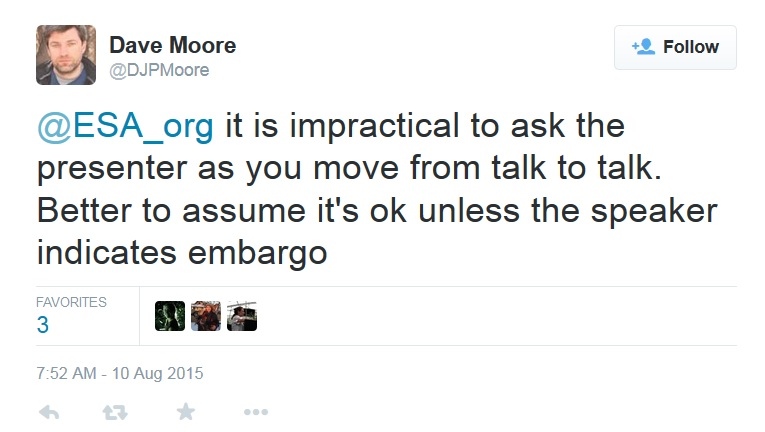 Johan Nilsson, an evolutionary ecologist at Lund University in Sweden who was not at the conference, tweeted: 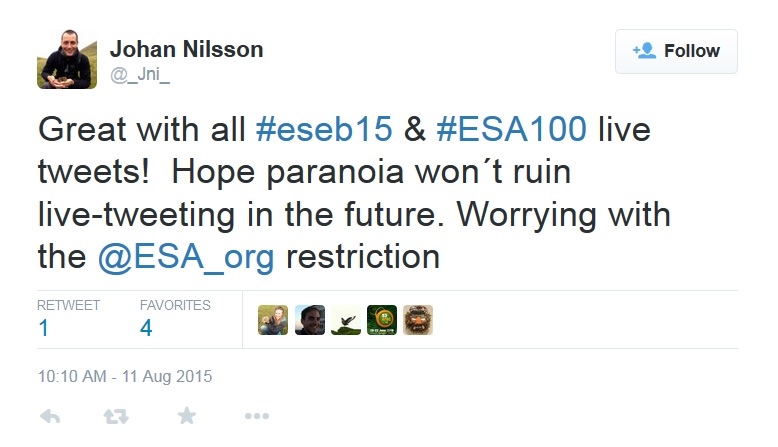 Lester admits that ESA’s tweet was confusing, and confirmed that attendees are indeed allowed to live-tweet sessions, unless speakers ask them not to. “The tweet that started it all was meant to be a suggestion to presenters to be upfront about their position,” she says. “But it was a little clumsy and out of context.” She says that the society will clarify the policy for next year’s event.

Ewan Birney, co-director of the EMBL-European Bioinformatics Institute in Hinxton, UK, who is a prolific tweeter, says that social-media policies have been evolving at many conferences — including the Biology of Genomes meeting, which he attended in May. Several years ago, Cold Spring Harbor Laboratory in New York, which runs this and other meetings, instituted a rule that speakers had to give permission for their talk to be tweeted and blogged (see Nature 459, 1050–1051; 2009). At this year’s meeting, he says, every speaker clearly spelled out their position on live-tweeting, leaving no room for confusion. “The community has developed a good rhythm,” he says. “Some people just want the conversation to stay in the room, and that’s fine. Most scientists really do want to communicate with anyone who wants to know more about their ideas.”