A battle over genetically modified (GM) foods in California is turning into an expensive war. Agribusinesses and food manufacturers last week pledged US$13 million to the campaign against a proposition that would require food to carry labels noting its GM content.

The money swells the opponents’ coffers to $25 million, promising months of campaigning before the public vote on the proposal in November. Supporters of Proposition 37, including organic farmers and environmentalists, have so far raised less than $2.5 million. 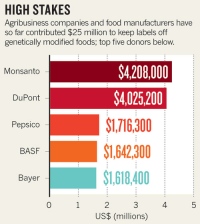 Those in favour of labelling argue that the public has the right to know what is in their food, citing food-safety concerns and a general mistrust of corporate interests in agriculture. Opponents say that the labels will be perceived as warnings, stoking consumer hostility to genetic engineering. They also argue that the move would raise food costs, and expose grocers, farmers and food manufacturers to frivolous lawsuits for incorrect labelling.

Similar labelling proposals have failed in other states, but a victory in California could set a national precedent. “If the ballot initiative passes, it would mark a turning point for public activism in the United States,” says Charles Benbrook, chief science consultant at the Organic Center, an organic farming advocacy group in Troy, Oregon.

Labelling would certainly have far-reaching consequences: around 94% of the soya beans and 88% of the maize (corn) grown in the United States is genetically engineered to resist herbicides, insect pests or both, according to the US Department of Agriculture. The plan could affect tens of thousands of brand-name products, and food manufacturers Coca-Cola, PepsiCo and Nestlé have each contributed more than $1 million to the campaign; meanwhile, agribusinesses DuPont and Monsanto have chipped in more than $4 million apiece.

The labels would not reflect how the crops have been modified, or the quantity of GM ingredients in a food. Meat from animals fed on GM crops would not need to be labelled.

Bob Goldberg, a plant geneticist at the University of California, Los Angeles, says the proposition is “anti-science”, and could discourage research to develop drought-tolerant crops and more nutritious foods. Studies by the US National Academies1 and Britain’s Royal Society of Medicine2 found no evidence that biotech crops are unsafe to eat. And, in June, the American Medical Association said that there was no scientific reason to label GM foods, but recommended that long-term studies should be vigilant for any health effects. Benbrook says that, far from being anti-science, the labelling could support health studies by helping to track people’s food choices.

Pro-GM plant scientists also point out that the crops can benefit the environment by enabling farmers to use less-toxic herbicides and reduce insecticide use. But proponents of labels say that these benefits are temporary, and point to studies showing that weeds and insects have evolved resistance to the modified crops3. Seed companies can counter this by engineering new crops that are resistant to additional herbicides — such as a new soya bean developed by Dow AgroSciences of Indianapolis, Indiana — something that Benbrook argues will actually increase herbicide use.

In a poll earlier this month, 69% of Californians supported the proposition, and a national survey by Thomson Reuters in 2010 found that 93% of respondents wanted labels. But opinions can change: earlier this year, a cigarette tax that would have funded disease research was narrowly defeated at the ballot after 67% of voters initially supported it. That change of heart coincided with the cigarette lobby spending an estimated $50 million on campaigning. Benbrook predicts that even more money will be thrown at the anti-GM-labelling campaign.